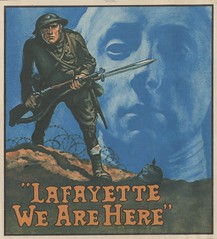 With regard to yesterday’s terror attack in Nice, I wish there was some strong, effective “Lafayette, we are here” assistance we could offer our long-time friends the French. But how can anyone predict and prevent this kind of lone-wolf terrorism?

It’s safe to say we already share terror network intelligence with France and other Western nations. Any such nation-to-nation intel sharing would be highly classified, and for that reason if it has been successful in preventing planned terror attacks, we won’t hear about it for 40 or 50 years.

Beyond sharing intel, though, what can we do? There’s no military response, not inside France. We (and the French, and several other nations) are already bombing ISIS in Iraq and Syria, and sending special operations forces after other terrorists in the Middle East and Africa. What else can we do?

I hesitate to ask why we in the USA aren’t experiencing large-scale attacks like the ones in France. I feel that would be asking for it. Some of our own mass shootings have turned out to be lone wolf terrorist attacks, different only in scale from what the French are experiencing. Huge crowds gather on the streets of American cities all the time.* We’re as vulnerable as anyone else.

Seriously, though, have any American politicians publicly admitted there’s not much we can do to prevent lone wolf terrorism? Sure, you can catch the stupid wannabes before they get their stuff together, but what about the true lone wolves, the ones who keep their plans to themselves until the moment they strike? The French prime minister, Manuel Valls, said this to his countrymen yesterday: “The times have changed, and France is going to have to live with terrorism.” True enough, but I can’t imagine our leaders admitting such a thing to us.

What does living with terrorism suggest to you? To me, it conjures visions of a police state with martial law and curfews and prohibitions against mass assembly. That’s what clamping down will inevitably lead to. Hmm … would I rather be clamped down on by Donald Trump or Hillary Clinton?

*Some day our kids and grandkids will learn about the planned terror attacks the Obama administration successfully prevented. I’m sure there have been many, and I want to believe we’ve helped the French and others prevent a few as well. I hope Americans of a few decades from now will better appreciate President Obama than the ungrateful assholes who snipe at him now.