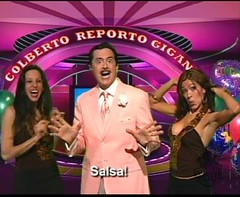 Did I mention picking up where I left off at Anytime Fitness? As before, other gym patrons have a habit of setting the wall monitors to Fox News, where old grievances are always fresh and raw. I swear, you can’t watch Fox for 10 minutes without seeing some reference to Bowe Bergdahl, Benghazi, or the time Barack Obama refused to drink a beer with Mitch McConnell.

Tuesday, though, was different. I didn’t notice at first, because I usually get on the stationary bicycle and lose myself in a Kindle book, but after pedaling for a few minutes I realized I wasn’t hearing the words and names that normally bubble up in the background—email, Monica Lewinsky, indictment, Ambassador John Bolton—so I glanced at the nearest screen. There was a reporter up to her ankles in water, talking about floods in Texas. She didn’t mention politics, nor did the chyron running underneath. I squinted to make out the logo at the bottom left of the screen: HNL. Well, that explained that. If it had been Fox News, they’d have found a way to slag Obama and Clinton for those horses on the porch.

This morning the wall monitors at the gym were set to a variety of channels. When I was on the leg machines the closest TV was set to Univision Arizona. Remember Colberto Reporto Gigante, where Stephen Colbert lampooned Mexican TV? Without wanting to seem like I’m picking on Univision or its viewers in any way, I must say … Univision Arizona is just like that, right down to the chicas!

Speaking of Mexico, I tried another of Polly’s south-of-the-border frozen fruit bars last night. This one was called Pepino con Chile, a cucumber & chile popsicle. And I liked it, though my lips and tongue burned for a while after I finished it.

Here are my chicas, by the way.

Shifting gears, I was happy to see Hillary Clinton hogging the oxygen in the room yesterday. It’s about time: for the past few weeks El Trumpo has been breathing most of it, at least from what I see on the media, with Bernie Sanders huffing up the rest. But one good speech, and how things change.

I’m not going to join the chorus of men who say Hillary sounds strident in her campaign speeches, but I will say this: to me at least, she doesn’t present well when she yells slogans into the mic like a traditional candidate. I never feel I’m seeing the real Hillary when she does that, and if she seems phony to me, a die-hard Hillary fan, how about to less committed voters? Listening to her speech yesterday, though, I felt I was seeing the real person behind the candidate. She was smart, conversational, armed with facts, and entirely persuasive. I think she’s found the right voice to use for the rest of her campaign. I hope she sticks with it. Not to mention, she’s dead on in her assessment of Donald Trump and the chaos he’d inflict on our country and the world should he get elected.

I have little to say about the Air Force Thunderbirds and Navy Blue Angels crashes yesterday, other than to honor the pilots: Blue Angel #6, who died on impact, and Thunderbird #6, who ejected safely but then had to endure a grip & grin with his commander-in-chief. I’m not sure which fate I would have chosen, and I don’t say that lightly.

Flying fast and maneuvering hard at low altitude is dangerous work. There’s no room to recover when things go wrong, as any demonstration or aerobatic team pilot will tell you. There are days when I take a dim view of the military’s love for bread & circuses public displays. This is one of them.