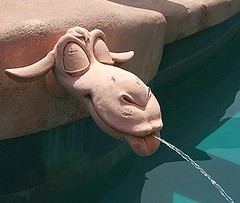 Our friend Angie’s here for a week, visiting from Tampa. She and I once worked together in the A-10 program at Davis-Monthan AFB here in Tucson. Her company, CAE, sent her from Tampa to Tucson when the USAF awarded it the DMAFB A-10 training contract. I signed on a year later and that’s when we met. She’s back at the company’s main office in Tampa now but comes to visit every year. Not only are Angie and I still good friends, she and Donna and Polly are thick as thieves … she and Polly went clubbing a couple of nights ago, the first time Polly’s gone out for fun in over a year.

Yesterday I wrote a post about our Sunday motorcycle ride; our friend likes to hike and ride bicycles too. Tuesday, while I was at the Gila Bend gunnery range with a group of Tucson business people, Donna and Angie went hiking in the Rincon Mountains with another friend, Dee. Yesterday Angie borrowed Polly’s bike and went for a long ride; she just left for another ride, and tomorrow the two of us will ride downtown to scout a bicycle trail for an upcoming Hash House Harriers event (sadly, she’ll be back in Tampa the day of the hash, and I’ll have to hare the trail alone).

I guess my point is that visitors … this visitor in particular … keep us up and off our asses. And that’s a good thing. Photos or it didn’t happen, right?

A good thing about living close to the southern border: local Ace Hardware stores stock Mexican soda and ice cream bars. It’s a big deal because the Mexican stuff is still made with real sugar, not fructose corn syrup, and Tucsonans in the know go there to get the good stuff. I’ve never been one for soda pop, but Polly, who works at the Ace store near our home, keeps us supplied with ice cream bars, and I must say you can tell the difference. I guess I’ll have to try a soda, although since I never drink American sodas I probably won’t be able to tell the difference.

I worked out for an hour at Anytime Fitness this morning. When I got home I broke out my set of metric Allen wrenches and installed a cell phone holder on the handlebar of Donna’s bicycle. Afterward, Angie and I put a new tube in the rear tire of Polly’s bike. There’s a whole morning, right there. Now I’m back trying to catch up with the bloggage.

I took almost a year off from Anytime Fitness. Now that I’m back, it’s like I never left. Fox News, which is invariably playing on all the monitors, is still relentlessly flogging the same outrages: Bengazhi, Obama vacations, Democratic (oops, Democrat) politicians using teleprompters, Solyndra. And now, of course, Hillary’s emails. This under the guise of what Fox News labels straight news reporting, not editorial comment from its stable of right-wing pundits. If you want to know what Ambassador John Bolton, as they invariably call him (has any Fox New correspondent ever uttered the words “Secretary of State Hillary Clinton”?), hates today about that black fellow in the White House, just turn on Fox News. Bolton’s target this morning: Obama’s “apology tour” in Hiroshima. This in spite of objective reality: the Hiroshima visit is over and Obama uttered not a single word of apology. No matter. Fox News will flog the Hiroshima apology tour story for years to come.

Ear plugs? I guess that’s my only option. All the other gym rats seem to think Fox News is a legitimate news source, judging by the rapt attention they pay to it as they pump and pedal. 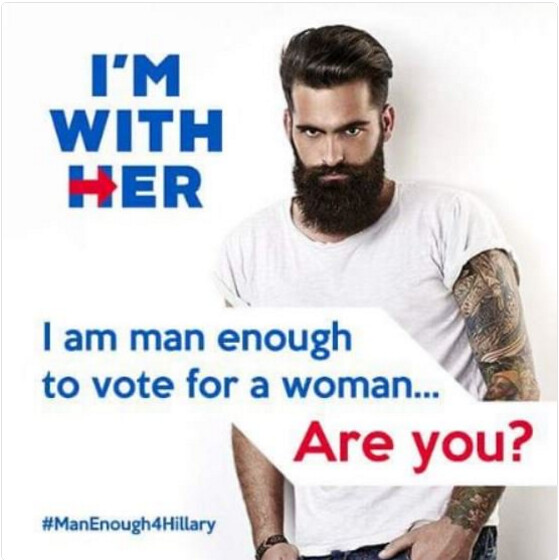 Never mind that the douche with the beard (who is so faux-manly he appears gay) may have been copied from an anti-syphilis public service announcement, I thought the #ManEnough4Hillary hashtag had a lot of satirical potential. I was one of the first to jump on it, using my iPhone to post this during my pedicure yesterday: 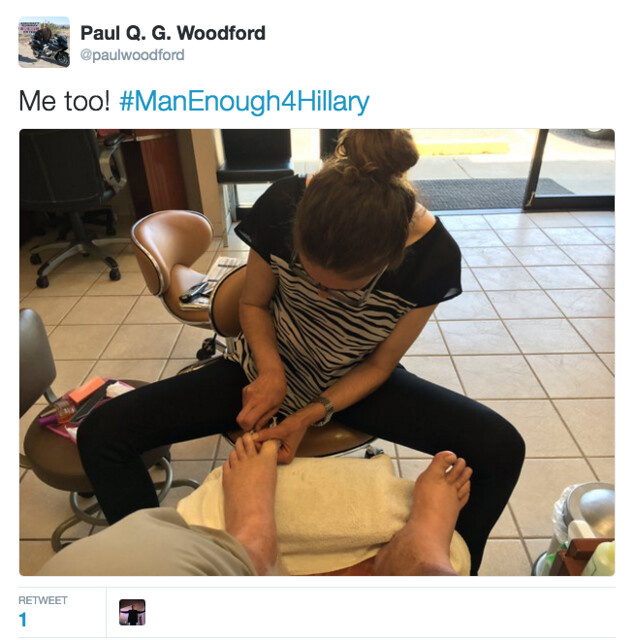 What, just one retweet? I thought it was brilliant!

I haven’t gotten around to writing about my trip to the Gila Bend gunnery range. That’s coming up, I promise.