Geeky but funny. A couple of nights ago I read a tweet from a guy who was having a run-in with a birther.

In another tweet, the birther left a link to his website. I clicked on it. Hey, who wouldn’t jump on the opportunity to get the TRUTH about Obama? One glance and I knew I wouldn’t find it here: 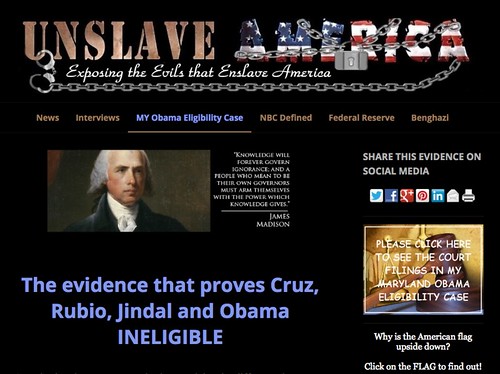 What followed was what passes for scholarship with these birds: screen shots of the Constitution and letters from founding fathers defining the phrase “natural born,” the same stuff we all learn in middle school civics. At the end, the “proof” of Obama’s birth in Kenya, which of course is no proof at all: Obama is Kenyan because some people say he is, plus he’s blackity black black!

What made me laugh was that after exposing the TRUTH about Obama, the birther’s argument just sort of dribbled off, ending with—I swear—a block of classic “lorem ipsum” filler text. I couldn’t resist taking a screen shot and jumping into the conversation: 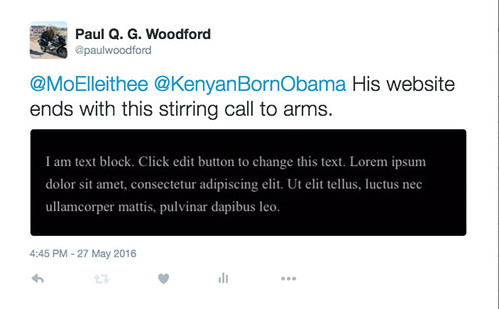 Well, naturally, I had to take a look at the NEW ENDING! Lorum ipsum is gone. Now there’s this:

As you can see, my name is highlighted, and links to my Twitter account. I expect, sooner or later, to hear from her (sorry about misidentifying your gender, dear lady) friends. Which is why I didn’t fuzz out her Twitter handle on these screenshots. As for Mr. Elleithee, he’s kind of a public figure and I didn’t think he’d mind, so I didn’t fuzz him out either.

Like I said, geeky but funny. And any time a birther troll denounces you by name, it’s a badge of honor!