A Good Ride, Not Spoiled

Lotta things going on, and the blog’s been down. I’ll start with Sunday’s motorcycle ride and try to catch up over the next two or three days.

Our friend Angie’s here for a week. Among other things, she’s a motorcyclist and member of our riding club, Harriers MCH3. We wanted to work in a putt during her visit, so when our mutual friend Dave proposed a Sunday ride we said yes. Two of Dave’s friends, Kirk and Mark, came along. Angie’s bike is in Tampa, so she rode pillion with me.

We took AZ Highway 83 south to Sonoita, then AZ Highway 82 west to Patagonia and Nogales. After Nogales, we bombed up I-10 back to Tucson. Both 83 and 82 are great motorcycle roads with curves, mountains, and rolling hills. I-10 is just a freeway, nothing special, but it’s a quick way home. I led our pod of four motorcycles down 83, normally deserted on Sunday. And it was … until we came around a blind curve at 65 mph and suddenly saw brake lights ahead. I managed to get the Wing stopped in time (thank you, ABS!), but Angie and I could both hear Mark, who had been staggered behind us, skidding. He stopped too, just in the nick of time, but then he and his bike went down.

We’d been going around a curve with a steep canyon wall to our right, blocking our view ahead. We certainly didn’t expect to come upon a solid line of stopped cars and trucks, but that was what awaited us halfway around the curve. Not only did the road curve, it was banked: high on the left, low on the right, dropping away even more steeply at the inside shoulder. What happened to Mark, once he skidded to a stop a foot from the back bumper of the tail-end car in the traffic jam, was that when he put his right foot down there was no road under it. Over he went. His motorcycle didn’t just come to rest on its right side, it wound up partly inverted, the handlebars and saddle lower than the wheels. Dave and Mark had a heck of a time getting it back upright (Angie and I watched, while Kirk turned around and rode back to flag down traffic approaching the blind curve, and it’s probably a good thing he did).

Turned out there was no hurry … we were there for fifteen minutes before traffic started to move, and by then we were all back on our bikes, none the worse for wear (if Mark’s bike was damaged at all, it didn’t show .. he didn’t even break a mirror). We crawled ahead through two or three more twists and then traffic came to another stop. This time we had a good view ahead, all the way to the summit of the Santa Ritas. We were looking at a two-mile line of stopped cars and trucks, and pretty soon a line just as long behind us. At the top was a medevac helicopter, presumably loading an injured crash victim. We turned off our engines, dismounted, and visited with our new neighbors for half an hour or so. 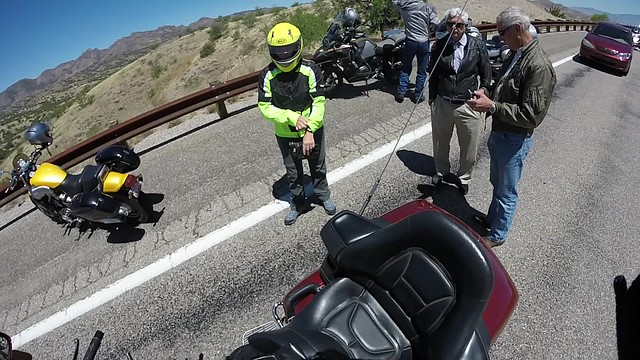 At last the helicopter flew away and traffic began to move again. It was a long, slow ride to Sonoita, but after a pit stop there we had to road to Patagonia and Nogales pretty much to ourselves. I kept the lead on that leg, averaging about 70, but slowed down after I saw the first cop. He let us ride by and at first I thought, “whew, we got away that time,” but then I began to suspect another cop was somewhere up ahead and that the first cop had radioed him about us. Sure as hell there was a second cop, but luckily for us he was giving a cager a ticket. I pretty much stayed on the double nickel after that.

After a photo stop at the old train station in Patagonia, Mark took the lead, since he knew of a back road around Nogales (not that going through Nogales is any kind of big deal, but it’s always nice to find roads you didn’t know about, and this one turned out to be pretty). He stayed in front until we cleared the Border Patrol harassment checkpoint on I-19, then took the Amado exit and led us to the Cow Palace for lunch.

After lunch I got back in front of the pack, and once we hit Tucson we split apart to take our separate ways home. A lovely ride in the country, miraculously unspoiled by what could have been a very unpleasant spoiler indeed!

Next: a visit to the Gila Bend gunnery range.