When we run low on dog food I take the girls with me to the neighborhood feed store. During chick season (which is a thing, who knew?) they have galvanized tubs of pullets inside the store, and the minute the dogs come through the door they hear them peeping and go straight for them. They can’t get at the chicks, since they’re down inside three-foot-tall tubs, but I’ll lift the dogs up, one at a time, so they can take a peek. Oh please please PLEASE buy us one, daddy, we promise not to eat it! Yeah, sure … I can guess how long that promise will last. 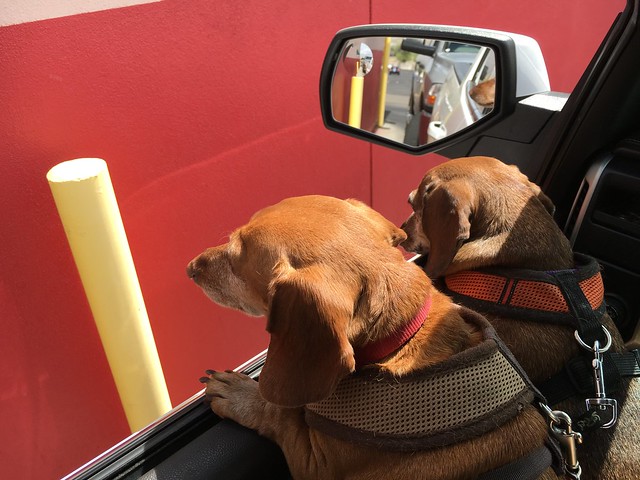 We made a dog food run earlier this week, and afterward drove across the street to our favorite Mexican drive-thru. That’s us, waiting in line. I ordered a Sonora dog, a regional treat I hadn’t heard of before moving to Tucson: a hot dog wrapped in bacon, deep fried, served with a jalapeño popper on the side. When we got home I pinched off a couple of bits of hot dog and bun for the girls. They live for fast food, but I never give them too much.

I carried though with the plan to list the hot tub on Craigslist. A woman looking for a used spa for her B&B came by to see it and gave me a check on the spot. Later in the day her husband came by to look it over and figure out how to get it out of our back yard and onto a trailer. The next day he came back with two other guys and some dollies. When they took the side panels off, we discovered that the wood frame was rotted on the bottom. This was a surprise to me as well … the spa never leaked in all the years we had it; apparently the damage was caused by overspray from the nearby lawn sprinklers.

Right away I began to worry what was left of the frame wouldn’t be strong enough to survive tipping the spa on its side, which was necessary to get it through the gate and into the driveway. My worries escalated rapidly: they’re going to ask for their money back and then leave us with it; when they try to stand it on its side the whole thing will disintegrate into an unsightly pile of wood and plastic; if they do manage to tip it and get it onto the dolly, it’ll topple into the deep end of the swimming pool, taking one or two of the guys with it, pinning them beneath its considerable weight and drowning them … I was hyperventilating by the time they got it out through the gate and onto the trailer. 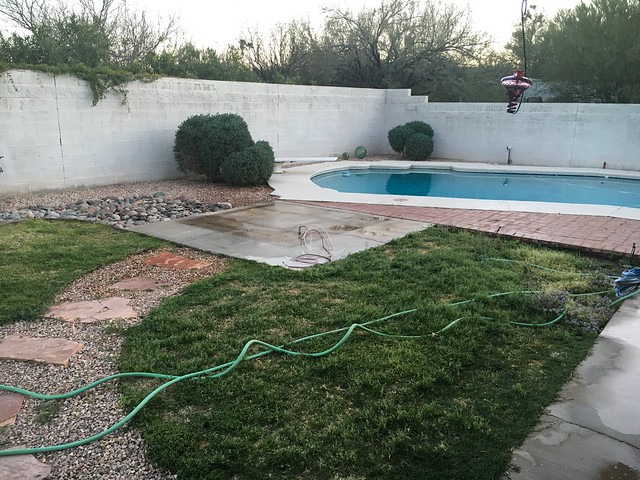 As you can see, my fears proved groundless. They wrestled it out of the back yard and onto the trailer. It’s gone. Polly and I cleaned up with pile of rotted wood they left behind, and best of all, we still have the check. Whew! Now we have to figure out what to do with the concrete pad. We’re thinking a small gazebo. The electrical leads are still there, as you can see, and they might be good for something. If we do put in a gazebo, though, it won’t be wood! 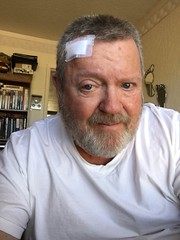 Tuesday they took out the stitches from my skin cancer surgery, but my skin hadn’t reacted well to the suture material and the wound didn’t heal as fast as we’d hoped it would. It is gross and unsightly. Now I have to clean the wound daily, put a little vaseline on it, and cover it with a bandage. They want to look at it again next Tuesday.

I was hoping I’d be presentable in time for air museum duty yesterday and the Tucson Festival of Books this Saturday, where I’ll be manning the air museum’s tent. Instead, I have this huge bandage on my forehead. Fortunately I found a hat that fits loosely enough to cover it and not press against my tender forehead. Now that my skin isn’t trying to reject sutures, it should heal normally. BTW, sorry about the T-shirt. I usually dress better for selfies!

The annual book festival is a big deal. I’m happy I’m finally getting around to going to one, even though I’ll be busy working at the air museum tent. The University of Arizona is a madhouse during the festival, so I plan to toss my bike in the back of the truck, drive to a park about a mile away, then ride onto the campus where I’ll be volunteering. This morning I learned one of my favorite authors, Paolo Bacigalupi, will be there, so I may hang around after my shift and try to get into one of the panels where he’s a scheduled speaker.

The next day, Sunday, is the annual air show at Davis-Monthan AFB. One of my fellow air museum docents has a secret spot just outside the air base fence where he takes photos of aircraft doing air show routines overhead. He invited me to go along with him. Should be a fun weekend.

Monday Donna and I are driving to Phoenix. Our son Gregory’s 50th birthday is today, and since he’ll be in Phoenix on business Monday we decided to go up and take him out to dinner. He won’t get in until the late afternoon, but I plan to drive up early and spend the first part of the afternoon at the Commemorative Air Force Museum in Mesa, a Phoenix suburb. CAF used to stand for Confederate Air Force, but they changed the name several years ago. I’m sure the minute Donald Trump takes office, they’ll change it right back. They’ll probably bring back the negro baseball leagues, too. And god knows what else.

Next Friday is a scheduled motorcycle maintenance day. I’m going over to Ed’s garage with parts I ordered online and we’re going to rebuild the forks, which are leaking a bit at the seals. We’ve had some practice at this: between his Goldwing and mine, this’ll be the third set of forks we’ve rebuilt. Originally Donna and I were going to tow the motorcycle to Las Vegas Easter weekend so I could go riding with our son while she visits Beth and the grandkids, but it being Easter weekend all the hotels are booked and we’ve decided to put the trip off until April. At least I’ll have good forks when I finally go riding again.

Our daughter’s barista job at Starbucks turned out to be more aspiration than actuality, and for the past two days she’s been beating the pavement looking for something else. She’s out at an interview now. We’re keeping the pressure on … we can’t afford to keep feeding her indefinitely. It’ll be her birthday next week, and I guess we should start thinking about how we’re going to mark the occasion.

I bet you feel the same way, too. Well, here’s to you. And me. And may we both still be here come election day!