We’re back on our bicycles, at least until it becomes unbearably hot. We rode 14 miles last Sunday and put in another 10 yesterday. Here we are with our friends at Agua Caliente Park, which seems to be springing back from the mud pit it had become last summer. 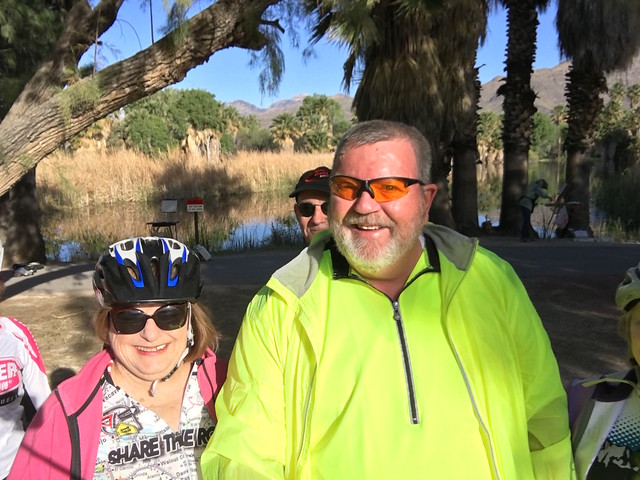 My forehead is healing well; the stitches come out Tuesday. Wearing a bicycle helmet yesterday may have been pushing things a bit, because a couple of the steri-strips came off immediately afterward, but I wanted to take some GoPro videos of our ride and the helmet was the logical place to mount the camera. Here I am whizzing down a neighborhood hill, overtaking the rest of the Trail Trash, our informal riding group. 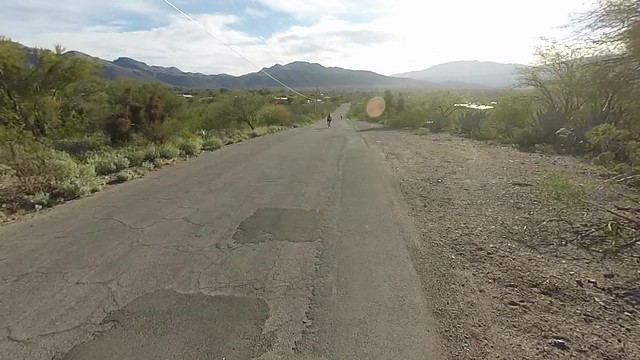 Polly’s been pursuing an HR job in Scottsdale. Her first interview was two months ago. There’ve been several since, each with someone higher up than the one before. She had to drive to Scottsdale, two-and-a-half hours each way, for the initial interviews, but was able to do some of the followups on the phone. Her final interview was Thursday, once again in Scottsdale, this time with the president of the company. Polly had to spend the night in Phoenix and wasn’t able to come home until Friday. Good news at last: Polly landed the job. Now the bad news: it doesn’t start until July (damn me if I don’t still think they’re stringing her along).

For now, she’s taking a part-time job as a Starbucks barista and will at least contribute toward her upkeep (and save some money for when she has to move to Phoenix, assuming the promised job comes through). Why she couldn’t have done this nine months ago, when she first moved back in with us, I do not know. Now I sound like I’m whining. I am. Parents of live-at-home adult children will surely understand.

Enough about that! On Monday the 14th we’re driving to the big city ourselves. Our son Gregory will be in Phoenix on business, and we’ll celebrate his 50th birthday by taking him to dinner. I plan to go up early so I can spend the afternoon taking photos of old warbirds at the Commemorative Air Force Museum in Mesa. The following week an old friend is coming to spend a day at Pima Air Museum as my guest.

I just listed our old spa on Craigslist. It needs a $450 pump motor and we’ve decided to get rid of it. It’s got to be worth something for the parts, but I’ll be happy to give it away to anyone willing to haul it off our property. I have a sinking feeling, though, that we may have to pay someone to take it away.

Our old cat pees on our floor almost nightly now. Donna used to ask Chewie how she was every morning (she talks to Vanna White every night, too … I’m used to it, and what the hell, I talk to the dogs all the time). These days, the first thing Donna asks Chewie is “When are you gonna die?”

I’ve been trying really hard to stay out of political discussions on social media, or to start any on my own. What’s the point? Everyone’s in tribal mode now and arguments are futile. Still, I can’t abide stupidity and racism, two things that always seem to come together, and I’ve muted a few folks for the duration (and possibly forever). For god’s sake, smart people, don’t stay home on election day!

I’m halfway through Jonathan Franzen’s latest novel, Purity. It’s become fashionable to dump on Franzen, but not around these parts: I think he’s one of our greatest contemporary novelists, and I’m as swept up in this one as I was in Freedom and The Corrections. It was unsettling to realize I knew where one chapter was going and how it would end, but then I remembered The New Yorker had published a section of the novel last year.

Speaking of writing, I’m nowhere with my book/memoir/whatever, but it’s never far from my mind. For what that’s worth. BTW, our guest next week is our writer friend, a man with several published novels to his credit. I’m going to have a hard time looking him in the eye! Ah, where would be be without guilt? Nothing would ever get done.