Once a year, rich guys with extremely expensive toys train alongside active duty USAF fighter pilots and jets at Davis-Monthan AFB in Tucson, Arizona. The annual program at DMAFB is called the Heritage Flight Training and Certification Course, and over the course of a few days civilian and military pilots practice flying close formation. Pilots who complete the course will fly together during the 2016 USAF air show season.

This year’s course is underway now at DMAFB and will run through this weekend. As I did last year, I drove to the base to take photos. It’s not publicized, but the flightline by base operations, where participating aircraft are parked, is open to spectators. It’s not really an air show, but it might as well be, and it’s just the right size for me … no big crowds, and a great view of the show line down the runway.

I finally saw my first F-35. Two F-35As from Luke AFB in Phoenix were parked alongside the other USAF jets participating in this year’s training course: two F-22s and three F-16s. As with last year, there were no F-15s, not even a Strike Eagle, which was a little disappointing, since both versions of the Eagle are still a primary part of the USAF fighter fleet. But hey, F-35s! Here’s one taking off: 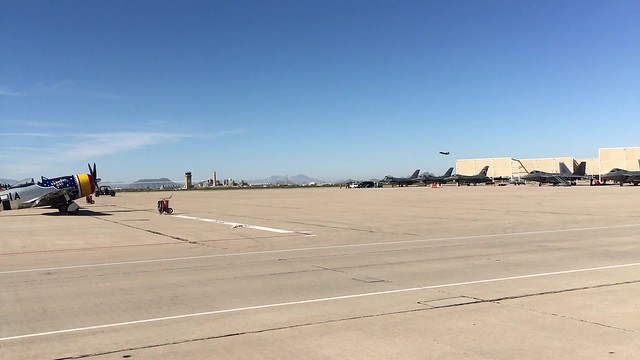 I’m pretty sure the F-35 was in mil power during that takeoff. I wonder how loud it is with the afterburner lit … I’ve heard they’re pretty loud, and now I’m convinced.

Here are a few thumbnails I thought worthy of this photoblog. As with the photos and video above, you can click on them to see the originals in Flickr. And here’s a link my full Flickr Heritage Flight album, containing photos from this year and last.