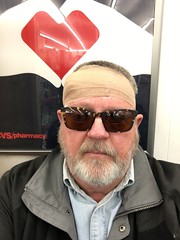 Another day, another skin cancer. This’ll make six, and they’ve all been on my face. Some have left visible scars, some haven’t. I’m hoping this one won’t be too bad, but it’s out of my control and I’m not going to lose sleep over it.

Two weeks ago the dermatologist found what he thought might be a basal cell carcinoma on my forehead. The biopsy came back positive, and this morning he cut it out. Here I am two hours ago, fresh from the surgery, waiting for a hillbilly heroin prescription at the local CVS. I’m home now, taking it easy as directed.

I return tomorrow morning to have the big wrap removed, then again next Tuesday to have the stitches taken out. The following Wednesday I’ll be back at the air museum.

Yes, I wear hats. Yes, I use sunblock. In case you were going to suggest, etc. I’m sure the damage was done by the time I was in my mid-40s; the price is being exacted now. I visit the dermatologist every four to six months, and about once every other year he finds and removes another small skin cancer. No biggie, as long as we stay ahead of it. Donna’s had a couple and she’s on the same schedule, though with a different doctor. Our son was worried about a spot last time we saw him; he’ll be 50 next week so he’s right on schedule. Our daughter? Her time will doubtless come. Our ancestors should have stayed in England and Europe, if they were so worried about damaging their pasty white complexions.

They tell me it’s Super Tuesday. Arizona’s primary isn’t until the 22nd of March, but I voted by mail last week. Up until this year I was listed as an independent and only voted in general elections. This time around the primary seemed important, so I changed my registration to Democrat in order to participate. Will I watch the news tonight? Maybe for ten minutes or so … I can’t stand much more than that. When it comes to cable channels like CNN and MSNBC, I can’t stand even ten minutes.

I only ever watched Melissa Harris-Perry when she subbed for Rachel Maddow, but I liked her and am sorry MSNBC let her go. Apparently MSNBC cut away to a Trump rally in the middle of her weekend show and she walked out over losing editorial control. MSNBC called her bluff and fired her. Except I don’t think she was bluffing … she must have known she’d lose her show if she took a stand, and took it anyway. Bully for her, and fuck MSNBC for treating every public appearance of Donald Trump as if it was a moon landing.

I’ve long thought my favorite MSNBC commentators, Chris Hayes and Rachel Maddow, were losing editorial control over their shows. Now I’m convinced they have, because virtually all they talk about any more is the presidential horse race and Trump’s moment-to-moment status with polls and delegates. I think Hayes would rather be talking about nuts and bolts issues … climate change, race relations, infrastructure, energy … but I don’t see him taking a stand à la MHP. He’s at the top of his game, he’s got a family to support, and MSNBC is his only job (MHP never gave up her university professorship and had that to fall back upon). Sadly, I don’t think Rachel would even think of walking. She clearly revels in wall-to-wall political coverage and is an enthusiastic supporter of MSNBC’s all-Trump-all-the-time philosophy. No, I don’t mean by that I think she’d vote for the guy … what I mean is I think she likes talking about Trump (and has no idea how alienating that is to her fans). Either that or she’s suffering from Stockholm syndrome.

Cable news has lost me and I don’t know that I’ll come back, even after the elections. These days I get my news from Google, and it’s not a bad way to get it. About once a week I compare Google News coverage to online New York Times and BBC coverage, and they’re all reporting pretty much the same stories in world and national news, business, tech, science, and health. The good part is you can deselect entertainment and sports if you don’t give a shit about either. And I don’t. Now where’s my damn rental car?

2 thoughts on “Return of the Half-Mummy”