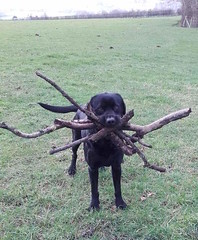 Our sprinkler and drip irrigation system has given up. The timer doesn’t time, the master valves stick open, the underground tubes leak … the entire system has to be replaced, and the estimate is over 2,500 bucks.

Of course it doesn’t have to be replaced. I can always hand water. In fact I did that yesterday. Most of the plants, bushes, and cacti on our lot survive on what happens to fall from the sky. The irrigation system covers three small patches of grass in the back yard, a few rose bushes and other flowering plants, a couple of trees and shrubs out front, the bougainvillea on the far side of the back fence that’s there to soak up noise from the highway. Still, that’s a lot of watering, and it takes time. If we can come up with the money, we’ll put in a new automatic system.

Donna’s doing a 5K tomorrow morning. She’s on her own, not running with friends. I’m thinking about driving her there and cheering her on, even though she has to be at the start by 7 AM. Maybe we can stop somewhere for breakfast afterward. When we get home I’ll start working on a pot of Uncle Art’s chili beans con carne.

I’ve been seeing a lot of Hillary hate on Facebook and Twitter, and am starting to think the people who post it are trolls. Not professional campaign operatives, more like Lenin’s useful idiots, unwitting volunteers in the service of cynical masters, rather like the amateur trolls who plaster social media with pro-pit bull propaganda. Just sayin’.

Funny how quickly anti-Catholic sentiment reared its head after Trump got into it with the Pope. Imagine the fetid ooze that would bubble up if some prominent rabbi ever insulted His Yuugeness. I don’t want to talk about Trump, because fuck him, but the very next day he went after another sacred cow. What’s next, motherhood? And is there anything he won’t say?

From a recent Washington Post article: “The U.S. Air force’s lumbering swing-wing bomber, the B-1B Lancer, is taking a back seat in the air campaign against the Islamic State.” Lumbering? My god, what would they call the B-52? Oh, right. …

Tangentially related to the trolling I mentioned, here’s the late Gore Vidal on Hillary’s pal Kissinger:

Among the crude Titans was Henry Kissinger. In the next few days he and I attended a half-dozen functions together. I have no idea what he was doing memorializing the American Academy; but the people who give money for such causes have made something of a pet of him, rather as they had made one of Truman Capote in an earlier time. I could hear the ceaseless rumbling voice in every corner of the chapel. The German accent is more pronounced in Europe than on television at home. He has a brother who came to America when he did. Recently, the brother was asked why he had no German accent but Henry did. “Because,” said the brother, “Henry never listens.” As I left him gazing thoughtfully at at the hell section of “The Last Judgement” (as pretty and bright now as Tiepolo), I said to the lady with me, “Look he’s apartment hunting.”

Okay, time I dropped a few of these sticks. But which ones? I love them all!