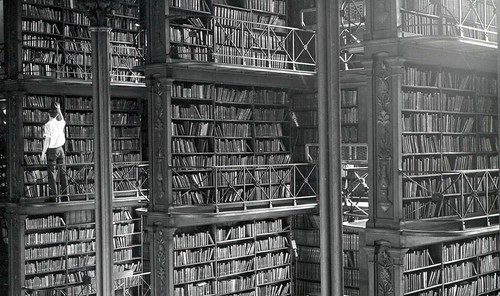 A parent in Seminole County, Florida, lodges a complaint after her 9-year-old brings home a copy of This One Summer, a young adult graphic novel aimed at readers aged 12 to 18. The book is pulled from elementary school libraries, but a local TV station’s crack investigative team discovers copies are also available in three local high schools! Horror ensues.

A Canadian professor has been told he’s no longer allowed to teach an introductory psychology course after asking students to sign a waiver agreeing to his use of coarse language. Here’s part of that waiver: 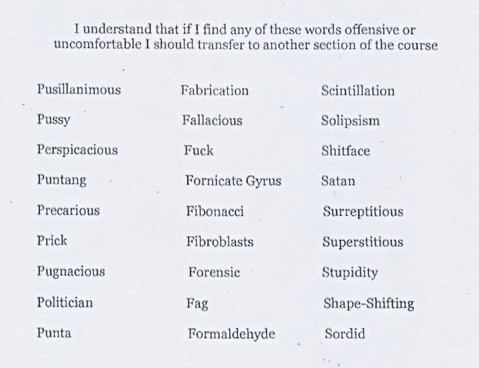 A children’s book depicting happy slaves in the Mount Vernon kitchen, palling around with their best bud Massa George? Well, that didn’t last long! Of course the stakes are actually quite high when it comes to censorship of children’s literature, as this thoughtful editorial points out.

Do they still burn books? Like, literally? Sadly, yes. The most recent case I know of in the USA was in 2005, when parents in Colorado torched copies of Rudolfo Anaya’s Bless Me, Ultima. In Russia, if you believe an official Russian denial is the same thing as a confirmation, they’re still at it in the year of our lord 2016.

In Qatar, a “flabbergasted” parent protested an inappropriate and indecent children’s book, saying it contained “illustrations and phrases that have sexual innuendoes.” The government’s supreme educational council promptly directed school officials to pull the book from libraries and classrooms. The book? Snow White and the Seven Dwarves.

Another high school, another student production canceled over profanity, sex, and drugs.

After a University of Missouri assistant professor tried to prevent a journalism student from interviewing protestors at a campus Black Lives Matter rally, a state representative proposed a bill to prohibit public schools and colleges from blocking articles or other content created by students. Pretty sure the First Amendment covers that, but what the heck, let’s have more laws!

Gee, what sorts of classroom material might be considered “harmful to minors?” What books might be labeled “sexually explicit?” The answer, of course, is “anything they don’t like.” Under such laws, beloved books like Anne Frank’s diary might get a teacher in trouble! Think I’m kidding?

“And now something else. You’ve known for a long time that my greatest wish is to be a journalist, and later on, a famous writer. We’ll have to wait and see if these grand illusions (or delusions!) will ever come true, but up to now I’ve had no lack of topics. In any case, after the war I’d like to publish a book called The Secret Annex. It remains to be seen whether I’ll succeed, but my diary can serve as the basis.”

I first read Anne Frank’s diary in the mid-1950s when I was 11 or 12. My father was in the military and we lived on a USAF base near Kaiserslautern, Germany. I had been told about the extermination of the Jews, but even though we lived in a city where reminders of the recent war were everywhere you looked, the Holocaust was an abstraction, too big to comprehend … until I read the diary. I was outraged. I was moved. I’ve never forgotten the impact it had on me.

My experience was typical, at least of my generation. We read Anne Frank’s diary as children; we were horrified and moved; we have never forgotten it.

I decided to re-read The Diary of a Young Girl as an adult, partly because more of Anne’s journals have come to light since the death of her father, who prevented certain entries from being published during his lifetime; partly because I’m interested in book banning and Anne’s diary has been a frequent target of those who want to suppress books.

The experience of reading Anne Frank’s diary is still powerful, though as an adult I’m much more aware of her youth: she was very much a teenager, full of herself, impatient with the other seven people crowded cheek to jowl in the hidden rooms above the spice warehouse on Amsterdam’s Prinsengracht; in short, she could be downright annoying.

At some point in 1944, a spokesman for the exiled government spoke on the BBC, asking Dutch people to preserve their memories of the German occupation and the war in general; Anne decided to rewrite and edit parts of the diary for future publication. Certainly not all parts, though … you can tell which parts she had in mind for her notional post-war book; the day-to-day entries about fights with her mother and other residents of the secret annex were clearly meant to remain private, as were her very personal reflections on puberty and her growing interest in sex.

Most of Anne’s diary focuses on personal concerns, but her awareness of why she and her family were living in hiding was never far from the surface. When she occasionally wrote about the Nazis and what they had done, and were doing, to the Jews of Holland … to Jewish boys and girls she went to school with, who had by then been taken away to camps in Germany and Poland … my hair stood on end.

The Diary of a Young Girl has been an international best-seller since it was first published in 1947. Millions have read it (33 million copies sold, translated into 75 languages). Millions have visited the Anne Frank house in Amsterdam. Still, there have always been those who want to suppress or ban Anne’s diary.

In the immediate aftermath of WWII, anti-Semites in Europe and elsewhere labeled the diary a fraud, claiming it was written by an adult as Jewish propaganda. Today, you can easily find anti-Semitic and Holocaust denial web sites making the same claim, despite the fact that several investigations over the years conclusively established the diary’s authenticity.

In parts of the Middle East, the diary is banned outright, and many Arabic people have never heard of Anne Frank. The motivation here is similar: anti-Semitism and opposition to the state of Israel.

Although the diary has never been banned in the United States, it has always been controversial to some. In recent years, especially since the publication of the complete diary containing entries Otto Frank kept hidden while he was alive, a few parents have demanded The Diary of a Young Girl be pulled from school library shelves and not studied in class. The most recent attempt was in Northville, Michigan, in 2013. Sometimes challengers say they oppose the diary because it’s depressing and dark, sometimes because parts of it are sexually explicit. I suspect there’s an element of anti-Semitism and Holocaust denial behind these challenges, but it is never acknowledged.

Depressing and dark? For those who’d prefer their children not be taught about the Holocaust, I guess Anne Frank’s diary is indeed that. Sexually explicit? Hardly. One of the passages Otto Frank omitted when he edited Anne’s diary in 1947, but which has now been reintroduced into the diary, is a one-paragraph description of her vulva. It’s honest but non-erotic, really just a reminder that Anne was a growing young woman interested in how her body was developing and beginning to think about sex. One wonders what these parents imagine their own kids think about.

At any age, reading The Diary of a Young Girl is a profound and moving experience. You are immediately transported to a different time and place, yet one that is never far away from our collective consciousness; you cannot help thinking of Anne as a childhood friend, which makes her fate particularly stark. She personifies, in the most exalted sense of the word, all victims of the Holocaust. As Primo Levi (himself a survivor of the camps) said:

“One single Anne Frank moves us more than the countless others who suffered just as she did but whose faces have remained in the shadows. Perhaps it is better that way; if we were capable of taking in all the suffering of all those people, we would not be able to live.”