A quiet Saturday morning with little to do until later, when Donna and I go to our bimonthly cooking club meeting. Our club meets every other month.* Two years ago, when we started, we’d cook ahead of time and bring prepared dishes to the designated host’s home, but for the past year we’ve been bringing ingredients instead, then prepping and cooking together before sitting down to eat. The theme tonight is Cajun, and we’ve been assigned recipes from the late Paul Prudhomme. Donna and I drew dessert, some sort of pecan praline thing (not a pie, which is a relief … our record with crust is a poor one).

The downside to prepping and cooking together is it always takes longer than we think it will, and sometimes we don’t eat until nine. Some members have big kitchens with lots of counter space and all the utensils; some don’t. And even in the biggest of kitchens, eight or nine cooks is a crowd. The upside? Working together’s a hell of a lot of fun, and by the time dinner’s ready we’re all good and hungry.

I watched the final episode of Continuum on Netflix last night. I’m going to miss that show. I said the same thing about Firefly, and Rita, and Breaking Bad, and after five more episodes I’ll be saying it about Veronica Mars. Sometimes we think about canceling cable and streaming and going without. Between Comcast, HBO, Amazon, and Netflix, we’re spending crazy money; stacks of books are waiting to be read. But then there’s this: How do you know when people don’t have a TV? Just wait, they’ll tell you. Yeah, we don’t want to be like them, so maybe we’ll wait until Game of Thrones is over.

For a change, an employer contacted Polly before she contacted them. Apparently someone she once worked with saw her profile on LinkedIn and thought she’d be a good fit for the company he’s now with. The job, if she gets it, is in Scottsdale, two hours north of here. She has an interview Monday afternoon. I’m not sure how it’ll work if she gets it; clearly she’ll have to move to Phoenix and she doesn’t have much of a bankroll, just the money from the motorcycle she sold. One step at a time. Get the job, then we’ll figure out how to help her get started again in Phoenix. Fingers? Crossed. Toes? Ditto.

Speaking of Scottsdale, I’ll be at the Barrett-Johnson car auction with some Tucson friends next Thursday. A friend from my flying days who now lives in California will be there too. I’m bringing a selfie stick so we can snap an iPhone photo of us in front of a cool car. Of course I’ll be lugging the big DSLR and flash attachment too, taking photos to add to my car show collection on Flickr.

I probably shouldn’t say anything about the latest social media witch hunt, but when has common sense ever prevented me from talking about things that upset people? By now I’m sure you’ve all seen this photo: 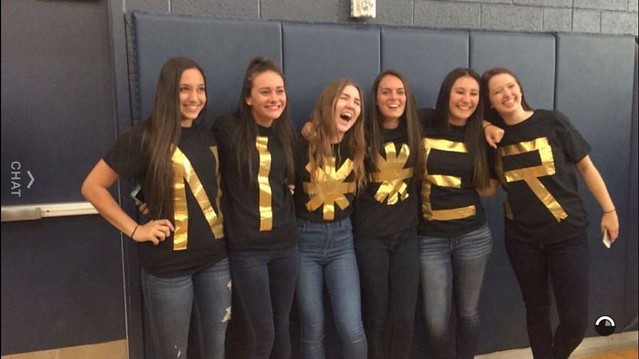 The girls are seniors at a Phoenix-area high school. The photo was taken yesterday or the day before. One of the girls, or possibly a friend, posted it to Twitter, where it caused an immediate stir. I first saw it yesterday in a Phoenix newspaper’s tweet, the faces blurred out. Half an hour later I started seeing uncensored copies with the girls’ faces visible and identifable. Within a few minutes someone had posted all six girl’s names; without a doubt their addresses, Facebook pages, and phone numbers are out there too. I know, from another news article, the girls are already receiving threats, as is the principal of their high school, and that police were on campus Friday afternoon to prevent violence.

Whew! That escalated quickly, but these days that’s how it goes. Remember Justine Sacco? She’s the woman who posted this immortal tweet in 2013: “Going to Africa. Hope I don’t get AIDS. Just kidding. I’m white!” By the time her 11-hour flight landed in Cape Town, she was the top trending topic on Twitter, the object of the hashtag #HasJustineLandedYet, quite possibly the most hated woman in the world. The second or third call she answered after deplaning was from her employer, letting her know she no longer had a job. All over a joke … an insensitive one, but still, a joke, no different than the kind of joke TV comedian Daniel Tosh gets paid for. You can click on the link to see what Justine’s life has been like since her brush with infamy.

I wonder what these girls’ lives are going to be like now. Personally, I think they were joking. That it’s a terrible joke and they shouldn’t have done it is obvious. They probably thought so too, once they did think about it. And I’m sure they’re damn sorry now, what with being suspended and getting death threats and all.

Before the damning photo was taken, the girls had been part of a senior class photo lineup, wearing black t-shirts with letters spelling out “Best*You’ve*Ever*Seen*Class*of*2016.” It’s not hard to imagine one or more of these six girls coming up with the idea to spell out a forbidden word. God knows my mind works along similar lines. If only they’d had the right letters, they might have gone with “fuck off” or “eat shit,” and at worst gotten a stern lecture from the principal. But they spelled out “ni**er” instead, probably thinking it would come across as sarcastic or intentionally ironic. Oops.

No, I don’t think these six girls are members of the Aryan Sisterhood. I think, like Justine Sacco, they were trying to make a joke. Still … take a good look at the class photo. See any black faces? Funny, neither do I. Which makes me wonder about school integration in Phoenix, and school integration in general. Somehow great swathes of America have become segregated again. Or maybe school integration never really took, save for schools in a few target cities, and then only for a little while after the civil rights struggles of the 1960s. But that’s a subject for a more well-thought-out and researched post, not one I’m prepared to tackle today. Instead, I’m going to be busy dodging hateful comments accusing me of making excuses for these stupid girls.

*I’m bothered by the nonexistence of separate words for “twice a month” and “every other month.” It offends me that bimonthly means either, and that I have to go out of my way to specify which of the two meanings I intend to convey. How did English-speaking people, with such a sloppy language, ever manage to come to grips with engineering and science?

One thought on “Best You’ve Ever Seen?”