Sunday felt like a motorcycle day, so I grabbed the GoPro and went for a ride on two of my favorite local roads, Arizona Highway 83 and a curvy section of Old Spanish Trail. The first order of business, however, was a freeway truck stop breakfast at the Triple T.

Fortified with eggs and bacon, I took AZ 83 south toward Sonoita, crossing the Santa Rita Mountains. Close to the summit I pulled over, set the GoPro to take stills every 10 seconds, clipped it to my helmet, and hit the twisties. Looking back, I should have selected a shorter interval, say one photo every 5 seconds, because out of two dozen photos only three or four caught me leaning into a curve. Here’s one of the better ones.

Once over the summit I pulled into a rancher’s driveway, reset the GoPro to video mode, and taped the ride back over the hills toward Tucson. Later I recorded parts of the ride through Vail and up the Old Spanish Trail, but those roads are so bumpy the videos are uncomfortable to watch, so I’ll just share this short clip of the climb back up the Santa Ritas toward Tucson, fun as hell until I got stuck behind a truck pulling a horse trailer. Thanks, Obama! 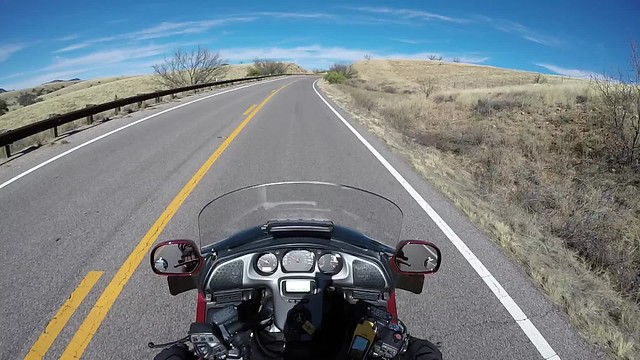 Oh, what the hell, here’s the bone-jarring ride on Old Spanish Trail. You might want to pop a Dramamine first. 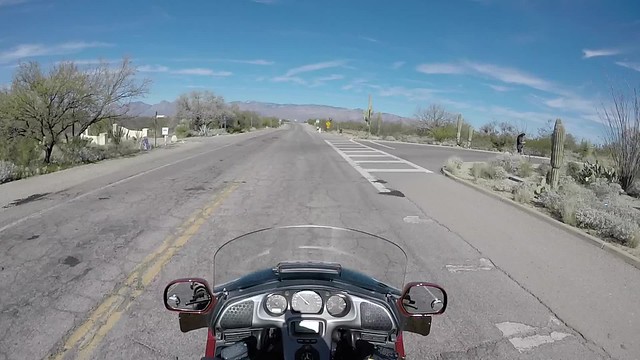 In other news, Polly says yesterday’s job interview in Scottsdale went well. Now standing by to see if she gets the job. If so, she’ll have to move to Phoenix, and Donna and I will have to figure out what we can do to help. We’re cautiously optimistic once again … at least this time the prospective employer isn’t in the used car business!