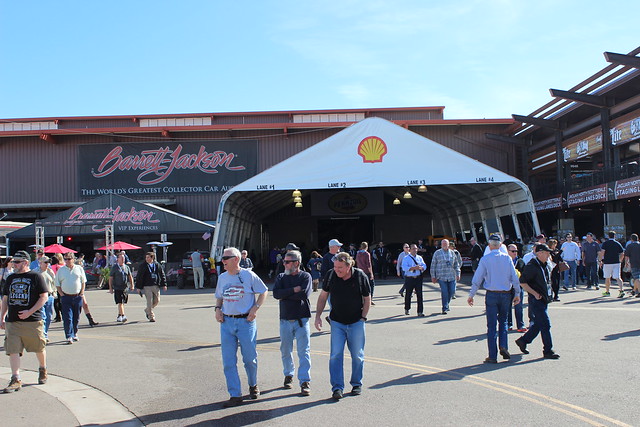 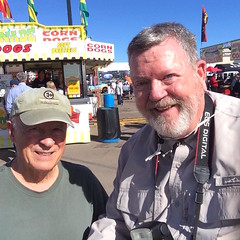 Yesterday I drove to Scottsdale with three friends (Ed, Chip, and Loren) for the annual Barrett-Jackson auto auction. My friend Dick Herman, who lives near Sacramento, California, was also there. We set up a rendezvous by the food stands and spent about an hour together, making plans for future visits back & forth. In the meantime I got separated from my Tucson friends, but I was there to take photos and would have held them back, so that was okay. I hooked up with them again at three in the afternoon and we hit the road back to Tucson.

Every year B-J seems more crowded; so much so this year it wasn’t all that much fun. Someone was always between my camera and the cars I wanted to photograph, and the mass of slow-moving people in the dark display tents was aggravating. On the way home I told Chip, also an enthusiastic photographer, that I wasn’t feeling it this year and didn’t expect my pictures to be very good. To my surprise, once I got home and downloaded them, there were some good ones after all. I’ll share a few here:

On the way home Ed remarked on the lack of motorcycles this year. I didn’t think of it when I was busy taking photos, but he was right. I saw maybe two motorcycles, and they weren’t even antiques. Wonder what’s up with that?

Tomorrow, Saturday, I’m riding the motorcycle down to Tubac, a resort community halfway between Tucson and the US/Mexico border at Nogales, for another car show. This one’s on a golf course, outdoors, and while there’ll no doubt be plenty of spectators, at least there’ll be room to breathe and stretch out. Something about those gloomy Barrett-Jackson tents makes crowds seem crowdier. Next year, don’t be surprised if I skip B-J and just go to Tubac instead.