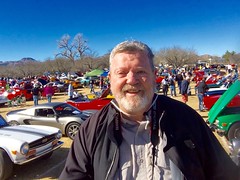 After my brush with agoraphobia at the Barrett-Jackson auto auction Thursday, I couldn’t wait to get down to Tubac for the annual collector car show on Saturday. Organized by the Santa Cruz Valley Car Nuts, the Tubac show is held on the resort community’s golf course, outdoors and nicely spread out. Even when there’s a crowd, it doesn’t feel crowded. There’s room to breathe, even to wave a selfie stick around (at BJ, I started getting stinkeye the minute I pulled one out of my pocket).

Temperatures were in the low 40s when I left home on the Goldwing, wearing a heavy leather jacket. By the time I got to Tubac, a little over an hour later, it was in the high 50s. I stuffed the leather jacket into a saddlebag and put on a light cotton windbreaker. An hour later it hit 70, and I ditched the windbreaker. At Barrett-Jackson, you walk on hard concrete, and there’s a lot of it … four miles easy if you want to see everything. At Tubac, you walk maybe a mile, all of it on grass. I felt a lot better after Tubac than I felt after BJ.

Another nice thing about the Tubac show: types and makes of cars are arranged by row. One row is for classics from the 1900s through the 1940s, another for 1950s cars; then there are specialized rows for Mustangs, Porsches, Thunderbirds, Brit sports cars, hot rods, antique motorcycles, and so on. If, like me, you’re not particularly interested in muscle cars, you can skip those rows and concentrate on the cars you like.

You want to drive to Barrett-Jackson: there’s valet parking for cars at the main entrance, whereas motorcycle parking is a mile away. You want to ride to Tubac, because there it’s the car parking that’s a mile away, but if you’re on a motorcycle you get to use the north entrance to the golf course, the same one used by exhibitors, and you park on the green with the show cars. Local high school volunteers hand out flat wood tiles to put under kickstands so they don’t make divots in the turf. You hand over your six dollar entrance fee, get your hand stamped, and you’re not only at but in the show … visitors’ motorcycles, parked next to the last row of show cars, draw as many spectators as the cars. 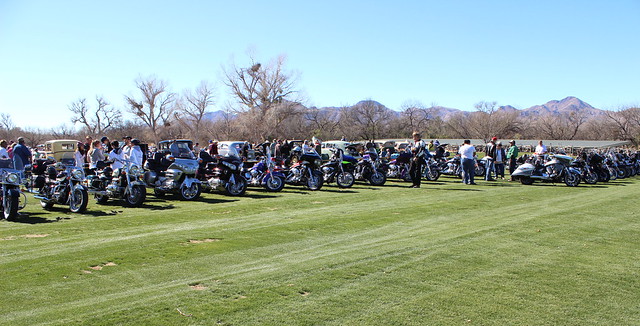 Tubac, as I noted, never feels crowded, but there were a lot of people there and I had to be patient while waiting to get clear views of some of the cars and motorcycles I wanted to photograph. At BJ, there were times I was ready to snap; at Tubac it was a lot easier to keep my cool (except for once, when two guys got into a long discussion about the cars they had in high school and I finally had to politely ask them to move a few inches to one side so I could get a shot of a 1957 Nash Ambassador).