The controversial and over-budget F-35 fighter is under almost constant attack. Some of the shortcomings identified by critics are no doubt real, but the story of a previously-unidentified F-35 glitch that emerged last week was, at least to this former air-to-air pilot, a bit of a shock: a report out of Edwards AFB stating that a clean (no external stores) USAF F-35A went dogfighting with a dirty (two underwing fuel tanks) F-16 and lost. 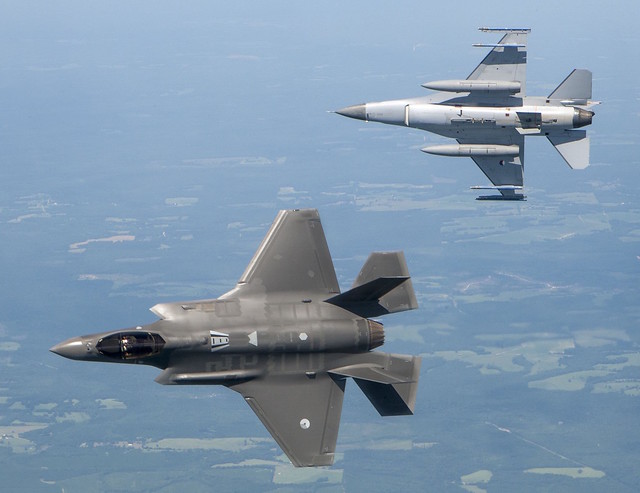 Disturbing if true. Then again, the F-35 wasn’t designed as an air-to-air fighter; it’s a strike aircraft, a fighter-bomber, and its air-to-air role is secondary. The F-22 is supposed to clear the skies of enemy aircraft first so that strike aircraft like the F-35 can go in and attack enemy ground forces and installations. Who knew, back when they were designing the F-35, that the F-22 buy would be capped at less than 200 aircraft, not the 700+ the Air Force had planned for?

I’ve heard that software problems limiting angle of attack and G onset rates might be affecting the F-35’s dogfighting performance. If so, it’s fixable, as are all the other developmental glitches and problems I’ve read about. And while I’m on fixability, let me say a few words about a once-controversial and over-budget aircraft I have first-hand experience with, the F-15 Eagle.

The F-15 program was hotly contested from day one. Prior to production, factions in the Pentagon and USAF were so opposed to the F-15 they were able to successfully kickstart a lightweight fighter competition designed to derail the entire F-15 project, a program that ultimately led to the F-16 and F/A-18.

The F-15 survived the factional infighting and went into production, but because it was an airplane that pushed the technology of the day to the limit, for the first few years of its operational life it suffered problem after problem. Every one of these problems was seized upon by those opposed to the F-15 and given maximum exposure in defense industry news: the engines were prone to compressor stalls, the radar and avionics didn’t work as advertised, planned defensive systems like the chaff & flare dispensers weren’t ready yet, spare parts and engines to keep the jets flying weren’t in the lean budgets of the Carter years. During early air-to-air fighter evaluations conducted at Nellis AFB, F-15s lost some engagements to low-cost, bare-bones fighters like the F-5.

And yet the F-15’s problems were solved; not overnight, but over the course of a few years. Most of the problems I mentioned were still issues when I started flying F-15s in 1978; by 1980 they had all been fixed. Engines, avionics, defensive systems, the works. As for the controversy about losing fights to cheap-o lightweight fighters like the F-5, it turned out that during those scripted encounters the F-15 pilots hadn’t been allowed to use their primary weapons, the radar-guided AIM-7 missiles that would have taken out the F-5s prior to the merge.

The F-15 went on to become the top air-to-air fighter in history, a position it holds to this day. Its combat record is literally perfect: F-15s have shot down 104 to 106 enemy aircraft in combat with no losses. The F-15 should have been retired by now, but because of the cap on F-22 production the USAF has been forced to keep a couple of hundred in service to supplement the F-22, and the F-15 is still the primary air-to-air fighter of several allied air forces.

Reading about F-35 development problems, I can’t help thinking of the F-15 controversies of the 1970s: the factional fighting, the overinflated doom-saying rhetoric about glitches encountered during initial operational tests, the chest-thumping braggadocio about beating it in dogfights.

The Department of Homeland Security issued a report on right-wing extremism in 2009. It was instantly and loudly denounced by the right as an attack on conservatism. DHS caved to the AM talk radio/Fox News noise machine, retracted the report, and shut down the working group that had produced it.

I’ve always wondered what effect that political tempest had on the various agencies under DHS and the Justice Department that were supposed to keep an eye on domestic threats like the Ku Klux Klan and other white supremacist groups, the sovereign citizen movement, and gun nut militias. Did they cut back on their surveillance of these groups?

I suspect there were funding and personnel cuts, but I can’t believe the feds quit investigating domestic threats altogether. Maybe I’m being naive. In any case, I fervently hope undercover FBI and ATF agents are still out there getting the dirt on rightwing extremists and domestic hate groups. We need actionable intelligence on whoever is torching all these black churches, and we need it now.

3 thoughts on “Air-Minded: Burning and Turning”