Earlier this week the Pima Air & Space Museum stayed open late for its annual Halloween Fright Night, an event for kids. When I went in yesterday to lead my weekly walking tours, the Fright Night decor was still up, so I asked another volunteer to snap my photo by this macabre diorama. 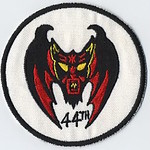 The coffin and bones are what drew me to that display. From 1989 to 1992 I flew with the 44th Fighter Squadron, aka the Vampires, at Kadena Air Base in Okinawa. Our patch (left) featured a vampire bat, the first flight of the day used the Bat 01 callsign, and the guest of honor at Friday night post-flying roll calls was Colonel Joe Vampire, a life-sized skeleton mannequin dressed in a flight suit and helmet who lived in a coffin like the one in the photo, propped up in a corner of the squadron ready room and after-hours bar.

Ah, esprit de corps. Where would we be without it?

I read today of the passing of Colonel Jack Broughton, the F-105 squadron commander who was court-martialed during the Vietnam war for trying to protect one of his young pilots by destroying gun camera film showing him strafing an off-limits target: a Russian ship in Haiphong Harbor. I read Broughton’s Vietnam memoir, Thud Ridge, and always admired the man, though at a distance. To my regret I never met him, but I did fly under majors and lieutenant colonels who had as lieutenants flown Thuds downtown under Broughton’s command.

I was happy to learn today, looking up background information on my old squadron, that my Vietnam-era Vampire predecessors flew F-105s out of Korat and Takhli in Thailand. Wow. A double dose of esprit de corps.

You know, those guys … the Jack Broughtons of the Vietnam war … may have been political troglodytes, ranting and raving that LBJ and McNamara cost us the war in Vietnam and put American aircrews’ lives at risk by micromanaging rules of engagement, ingress and egress routes, and an ever-changing list of targets we could and could not attack, but god damn it, they were right, and I can only imagine what their spirits think of the restrictions being put on our air campaign in Iraq and Syria today. 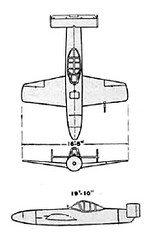 I’ll close with a few photos of Pima Air & Space Museum’s Ohka “Cherry Blossom” suicide bomb trainer, a literal flying coffin. This item, a spoil of war from a defeated Japan, was first studied by the US military and then put in storage (as you can see from the photo, much of it is still crated). Eventually it was given to the Smithsonian, which in turn loaned it to us. It currently sits in one of our back rooms, awaiting reassembly and restoration. The terms of the inter-museum agreement say it has to be stored and displayed indoors; we’re waiting for a new hangar to be built on the museum grounds before we put it on display.

The Ohka was a rocket-powered suicide bomb, a desperation weapon adopted near the end of the war. The Japanese would hang it underneath a bomber, which would fly as close to the American fleet as it dared before dropping it. Once released, the Ohka kamikaze pilot would glide until he picked his target, then dive and fire the rocket to accelerate to 500+ mph on his final approach, presenting a difficult, hard to track target to naval anti-aircraft gunners.

The standard Ohka had a single seat and a large warhead in the nose: our Ohka is a two-seater, a training variant discovered in Japan after the surrender. Presumably flying a rocket-powered bomb required a different skill set from that needed to fly conventional airplanes, necessitating a ride or two in a trainer first. In these models the warhead was replaced by water ballast and a forward cockpit for the (no doubt very brave) instructor pilot. After a training dive, the instructor and his student would glide to a nearby airfield and land on skids welded to the bottom of the Ohka. I’m going to guess the instructor handled the approach and touchdown; there wouldn’t have been much need to teach the student kamikaze pilot how to do that.

I wrote about our Ohka before, and I sneak into the storage room from time to time to see if they’ve worked on it or uncrated any additional parts. Wednesday, I discovered a new tail section, wings, and canopy sitting on a pallet, wrapped in plastic:

I can’t believe these are factory originals; I think they were fabricated by our restoration shop to replace the heavily-damaged original parts. In this photo, you can see the original tail section, much the worse for wear:

Hey, Ohkas weren’t built to last. The crates, on the other hand … don’t these photos remind you of the final scene in Raiders of the Lost Ark, when they’re putting the Ark of the Covenant into that enormous underground warehouse of precious and wonderful artifacts? Doesn’t that give you a bit of a Halloween vibe? It does me.

One thought on “Air-Minded: Coffins”