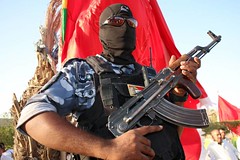 Over the span of my life, Islam has been a consistently destructive force. Sure, religious fanatics in other parts of the world have started wars, but for pure hate-driven evil nothing tops the Muslims. Islam turns much of its destructive force inward against fellow Muslims; still, it has plenty left over to direct against Israel, and with the 9/11 terror attacks in the USA and subsequent attacks in Spain and the UK, Islam declared war on the West as well.

The President spoke to the nation last night, outlining a strategy for dealing with the latest outbreak of Muslim fanaticism as embodied by the group called Islamic State. The speech was an obvious (and somewhat craven, it seemed to me) apology for earlier saying he didn’t have a strategy. But what he said last night was no more than a restatement of the strategy he’s had all along: we go after terrorist leaders and kill them, and that’s what we’re going to do to the leadership of Islamic State. There’s nothing new in Obama saying we won’t respect borders in this effort, witness us going into nominally-friendly Pakistan to kill Osama bin Laden. There’s nothing new in saying we’re going to employ drones and piloted aircraft to conduct surveillance and air strikes; it’s what Obama’s done all along.

One of the last things Obama wants is to go back into Iraq. Probably the very last thing he wants is to invade and occupy yet another Middle Eastern country, namely Syria. But here, I think, his strategy doesn’t match reality. Not going back into Iraq depends on Iraqis being willing to fight Islamic State inside their own country. Not sending ground forces into Syria in pursuit of Islamic State fighters depends on other Middle Eastern nations being willing to do so.

Do the Iraqis have the will to fight and defeat Islamic State? Are other Middle Eastern nations willing to go into Syria to root out Islamic State? The answer to both questions, as far as I can tell, is “Are you kidding?”

Obama wants to restrict our own military actions against Islamic State to air strikes. He says we’re not putting boots on the ground, but American airmen are flying combat and it’s inevitable some of them are going to have to eject over Iraq or Syria, the countries we’ll have to fly over in order to conduct air strikes against Islamic State. When that happens, our airmen will be captured and paraded before the media before being beheaded. How does Obama’s strategy address that?

Like many, I’m sick to death of Islamic fanaticism. I don’t see any viable resolution to the current unacceptable situation in Iraq and Syria. Talk of arming Syrian “moderates” is simply insane. We armed Osama bin Laden as part of our proxy war against the Soviet Union during the 1980s and 90s. We armed Saddam Hussein before that. We armed the Saudis, who, it is finally beginning to be revealed, were deeply involved in the 9/11 terror attacks on America. The “moderate” Syrian rebel groups we wanted to arm a year ago are the very rebels who sold kidnapped American journalist James Foley to Islamic State, which turned around and beheaded him. Working with Muslim moderates is bullshit. We’ve been bitten over and over again; when will we learn?

As for non-viable strategies, there are plenty of those, and plenty of politicians like John McCain who’d like nothing better than to go for broke … and break the world in the process.

We could, for example, invade Iraq all over again, along with Syria. Yeah. Does anyone think we have the national will to do something like that? Does anyone think such an invasion and occupation would require less than a decades-long commitment and a WWII level of mobilization, up to and including a military draft? Does anyone think neighboring states in the Middle East would remain stable in the face of a massive American incursion and permanent military presence? Does anyone think Iran or Russia will stand by and twiddle their thumbs while we march into Damascus?

I must admit, the thought of dropping neutron bombs on Iraq and Syria has occurred to me. Kill the people without destroying the infrastructure, wait for the radiation to die down, then move in and start pumping oil … that’s what neutron bombs are for, am I right?

I wish I could tell President Obama what he should do. Maybe the time has come to form an alliance with the Iranians … but they’re Muslim fanatics too, and not to be trusted ever. How can you work with Islam, period? Damn it, I keep coming back to kill ’em all.

Obama’s doing the right thing in exercising restraint, in refusing to be buffaloed into renewed combat in Iraq, or, god forbid, a new ground war in Syria. I’m glad he’s our President, and not some warmonger like John McCain. But Obama has to know he’s temporizing; he has to know he’ll be forced to do something stronger when Islamic State gets it murderous hands on American aircrews or some of our “non-combatant” advisors in Iraq.

I’m certain Obama and the military have thought this through and developed strategies to deal with a worsening situation; I’m equally certain he shouldn’t share these strategies beforehand with the American people, no matter how loudly craven politicians and the media howl, because if you reveal your strategy to us, you reveal it to the enemy as well. I think we’ll be there soon enough, and Obama knows this.

Did Obama really need to address the nation last night? If it weren’t the anniversary of 9/11, I’d say no. He has a strategy; he’s had one all along; he doesn’t need to apologize for a verbal gaffe. He’s done a good job of sticking to his strategy; he’s kept us out of the kind of stupid military disasters his predecessor specialized in getting us into. As for tipping his hand to the enemy, he didn’t give them any usable intel: he let them know we’re coming for them, not necessarily how or when, and that is all to the good.

It is, however, the anniversary of the 9/11 attacks. Even if it weren’t for the recent beheadings of American journalists, even if it weren’t for the growing chorus of voices demanding action against Islamic State, Americans would still be thinking about Muslim terrorism, as we do every year at this time. Because of that, I believe it was necessary for President Obama to address the nation and reassure us he’s on the job.