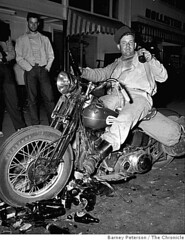 I’m getting ready for another mini-gypsy run, a week-long ride through Arizona, Nevada, Utah, and Colorado, and the fever is upon me. Even though I don’t leave until Wednesday the 17th, I got up early today to wash the motorcycle and paw through my collection of riding gear, picking out cold weather stuff. I found some things to bring for my son Gregory, who’s riding with me: an extra full-face helmet, a rain suit and booties, winter gloves. The forecast for Nevada and Utah, apart from the possibility of rain, is for warm weather, but once we get into southwestern Colorado we’ll need to layer up, at least during the morning hours.

So: Tucson to Vegas this coming Wednesday. An off day in Las Vegas Thursday; Greg and I’ll use the time to get ourselves and the bikes ready for the trip, which starts Friday. He’s renting a new BMW 6-cylinder touring bike. We’ll be evenly matched, with plenty of saddlebag storage between us.

The proximate problem is Interstate 15 between Las Vegas and the Utah border, part of which was washed out by last week’s heavy rains and is now closed. From just east of Las Vegas, traffic is being diverted over a massively out-of-the-way two-lane loop through eastern Nevada and part of western Utah before rejoining I-15 at Cedar City. 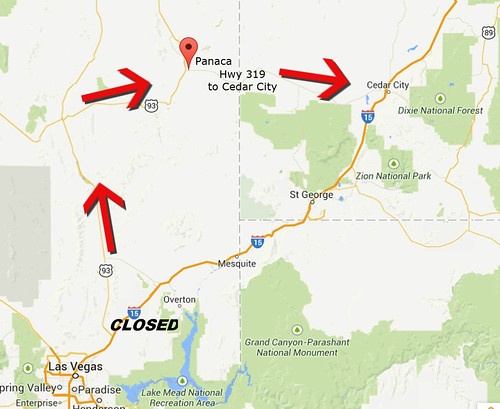 Considering the heavy long-distance truck traffic that normally clogs I-15, I can only imagine what a miserable detour this must be, never mind the extra hours it’ll take to negotiate it. They’re saying they’ll have one side of the freeway open for two-directional traffic by the time we leave Las Vegas next Friday morning. I’m keeping my fingers crossed, but working on a backup plan just in case.

Once Greg and I leave Las Vegas Friday, our planned route takes us about 450 miles to Moab, Utah, where we’ll overnight before leaving Saturday for Ouray, Colorado, which is 150 to 200 miles from Moab depending on the route we take, all of which will be over narrow twisty mountain roads. A gentleman’s ride, with plenty of time to sightsee along the way.

If I-15 is still closed, we’ll ride down to Kingman, Arizona and take I-40 to Flagstaff and spend the night there instead, then ride through the Navaho Nation into southwestern Colorado on Saturday. If we have to go that way, it’ll be a short ride on day one but a fairly long ride on day two … nothing we can’t handle, but I hope we can go via Moab as we planned.

We’re spending what’s left of Saturday and all day Sunday with my friends Bruce and Tamara in Ouray. Greg and I plan a day ride Sunday to take in Telluride, Durango, and Silverton. Bruce has a local riding buddy who wants to go with us and show us the sights. Greg and I start home Monday, overnighting in Cedar City, Utah and getting back to Las Vegas on Tuesday. I’ll ride home to Tucson Wednesday or Thursday, depending on how sore my butt is.

Donna and her friend Dee head for Las Vegas next Wednesday as well. If we can get our stuff together and leave at the same time we’ll caravan north, me on the bike and them in the car. They leave Las Vegas Thursday morning for St. George, Utah, where they’ll spend the weekend at an American Sewing Guild retreat. I don’t think they’re going to wait in Las Vegas afterward for Greg and me to get home from Colorado; they’ll probably drive back to Tucson on Monday or Tuesday.

Our daughter Polly is coming to stay at the house and keep the pets company while we’re away. The pups will be devastated when they realize they’re not coming along, but we’re driving up again in November for Thanksgiving with the kids, and we’ll bring them then.