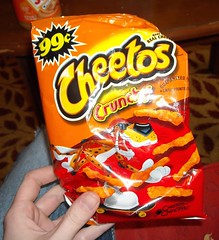 I saw a commercial for implantable contact lenses on TV last night. If “implantable” means what I think it means, what does “contact” mean? Contacting the inner surface of your eye, looking out? Why not just “implantable lenses”? Sort of a Six Million Dollar Man kind of thing, or am I thinking of The Terminator? The thought of sliced eyeballs gives me the willies. I don’t want to turn on the TV lest I see that ad again.

Matter of fact, I was going to title this post Thursday Bag o’ Sliced Eyes, and I even had a photo to go with it, but was too squeamish to go through with it. Be glad of that.

When I go to my local Anytime Fitness, I bring an e-reader. Thirty minutes of my hour-long workout is on a stationary bicycle, where I can read and pedal at the same time. The rest of my routine, though, is divvied up between several exercise machines, and even if I could find a place to prop the Kindle I’m not on any one machine long enough to justify the effort. That’s when I’m forced to notice the wall-mounted television monitors, placed so that there’s nearly always one in my line of sight.

Other gym patrons seem to like Fox News, and most of the monitors are set to that channel. One or two are usually on ESPN. Thankfully, no one turns on the sound … I don’t think I could bear that. Yesterday a notice on the bulletin board said the gym now has cable. Someone had already gone looking for the lowest common denominator and had set one of the monitors over to World’s Scariest Police Videos. The scary part, to me, was the guy sitting on the bench press machine, watching with open mouth. Why is it these police videos always feature black people being beaten and tased by cops? Do they quit taping when they bust white perps? I have to think it’s intentional, that the show’s producers are purposefully playing to a racist white audience. Like Fox News, come to think of it.

But I’m getting off point. The same bulletin board notice said the gym will soon have Pandora on wi-fi. There’s the answer to my second half-hour … listen to Pandora on wi-fi with earbuds hooked up to my cell phone, which can rest in the pocket of my gym shorts. That’ll make the leg presses go faster.

Game of Thrones is over. Fargo is over. What’s there to live for? Oh, right, books … so many books waiting to be read. I’m reading the newest Pynchon novel, Bleeding Edge. Very like the Pynchon of my college days, The Crying of Lot 49, Gravity’s Rainbow. I fell away from Pynchon for a long time … decades actually … but I’m enjoying this one. The only problem I have is when I lose my rhythm. Pynchon moves the story along with dialog, characters talking to each other or to themselves, but he doesn’t always tell you who’s speaking at the moment. No problem if you’ve been paying attention and you’re into the rhythm of the dialog, but let your mind wander for a second and you’re lost. Who said that? Was it Maxine? Or was it Tallis? That sort of thing.

On the Facebook Project (the Weaning Thereof), I’m learning that when I don’t contribute no one talks to me. Used to be every time I logged onto Facebook there’d be one or two private messages and at least a dozen comments on things I’d posted. I kind of miss the interaction, but most of that interaction was like eating cheese puffs … empty calories.

Well. When I have something to say, I say it on my blog, then post links to new blog entries on Facebook. I’ve been doing that all along, and will continue to do so. A few Facebookers click the links and visit, so that’s good. They never leave comments here at the blog (well, hardly ever), but they sometimes leave comments on Facebook. I probably will never be able to leave Facebook entirely, but at least I’m cutting back on the empty calorie interactions.

In previous posts I’ve mentioned some of the odd behaviors our old (18+ years) cat is now exhibiting. Here’s the latest: whenever I give the dogs a treat she muscles her way into the scrum and expects one too. This morning I had a dog at my left foot, a cat in the middle, and another dog at my right foot, all crunching away on Mini Milk Bones. Next time I’ll try to get a photo.

And now for something more substantial …

Rachel Maddow has been raising hell about the mainstream media’s unending love affair with the fools who got us into the ruinous Iraq war, which translates into giving them endless air time to undermine the current president and argue for invading Iraq all over again: “It is very frustrating to see that this is the way that we handle debates about foreign policy in this country,” Rachel says. “We take people who were so, provably, terribly wrong and bring them back and treat them like experts on the very subject they were wrong about. It is maddening.”

Yes, it is maddening. But so is her empty call to action: “Hey Sunday shows! Hey op-ed pages! Hey cable news! Hey everybody! We know you are tempted to keep booking these yahoos on these subjects, but if you keep turning to the people who were famously wrong about Iraq to ask them about to do about Iraq, you at least will be laughed at. And you will be embarrassed that you did this. And you will eventually have to apologize or at least explain yourself for why you thought Bill Kristol should be explaining what to do now. We can see what you’re doing, and it’s funny, but not in a good way.”

We laugh along with Jon Stewart and Stephen Colbert every goddamn night, and it doesn’t change a fucking thing. What makes you think the power brokers of the media will be the least bit embarrassed you’re laughing at them, Rachel?

One blogger is asking you to put your money where your mouth is:

See, here’s the thing.  However shrewdly rubes like me may speculate from way out here in the sticks about how the Hell these Neocon monsters keep getting invited back into the national spotlight, it is impossible me to find out the truth, for sure and on-the-record.  Realistically, the people who need to be asked hard questions are never going to return my phone-calls, nor will their assistants, interns or secretaries.

But MSNBC shares several floors of a building with NBC.

And they cross-pollinate all the time.

If Dr. Maddow really wants to find out why the fuck “we” keep booking “people who were so, provably, terribly wrong” and “treat[ing] them like experts on the very subject they were wrong about” all she has to do — literally — is grab a video camera, walk down the hall and ask her colleague David Gregory or his bookers and producer why they do what they do.

Then air that footage.

And then we’ll all know.