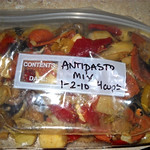 The second meeting of our cooking club is tonight. This time we’re preparing Italian recipes from Mario Batali cookbooks. Donna and I drew the appetizer course, so we’re making a simple antipasto tray with meats, olives, peppers, and cheeses. The host for tonight’s dinner is in charge of the main course; other members are bringing salads, vegetables, and desserts. Of course if we were doing a real Italian dinner, there’d be multiple courses … but none of us could eat that much.

We once had a dinner like that in northern Italy with Donna’s family. Aperitivo, antipasto, primo, secondo, contomo, insalata, formaggi e frutta, dolce, caffè, digestivo, each course accompanied by bottle after bottle of chianti, laughing and talking the afternoon away on a restaurant terrace overlooking a beautiful lake near Vittorio Veneto. Somehow, maybe because dinner literally lasted hours, it all went down. It’s a different lifestyle, and there’s much to recommend it.

Donna’s home from her sewing retreats, her week at Big Bear followed by a four-day event at a Tucson hotel with fellow members of the American Sewing Guild. They had a sit down dinner for the spouses on Friday night and of course I went. So many sewing machines in one room, different kinds and brands, most of them computerized, tens of thousands of dollars’ worth of highly specialized equipment. I was proud of Donna for bringing her 45-year-old Bernina and showing the other ladies how to kick it old school.

Facebook. So far I’m doing all right with the moderation approach, saving my chatty updates for the blog, mostly, no longer sharing every stray thought on Facebook. I continue to post links to my own blog posts and upload personal photos like the one of Donna, above. In the past I’d see interesting photos on Tumblr or Twitter and immediately repost them to Facebook. I’ve learned that if I force myself to wait a day before reposting, the urge passes. Same with links to interesting news reports and articles. Of course posting links to my own stuff cannot wait!

It’s Father’s Day, and I woke this morning to the smell of blueberry pancakes and bacon. Gee, and I’m not even Donna’s father! I thought of my Dad, of course. 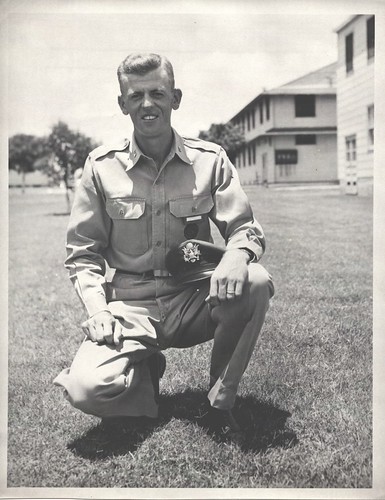 I think he was at Officer Training School when this was taken, about to embark on the second half of a 30-year military career (he was a Navy gunner in WWII, then, after a break for college on the GI Bill and a stint as a school teacher in Illinois, an officer in the USAF. A fine-looking man, no? I miss him.

And check out those old WWII barracks in the background. That’s Lackland AFB in San Antonio, Texas, as it looked in the early 1950s. When I went to OTS at Lackland in 1973, I spent the first night in one of those barracks. Most of them had been replaced with modern dorms, but they kept a few open for incoming officer candidates on their first night, just to start us off right, I guess. Bunk beds and all. Beetle Bailey and Sad Sack!

During a command post exercise in 1986 or 1987 the unit I was with spent a week at Fort Gordon outside Augusta, Georgia, where the Army put us up in identical barracks. The ones at Fort Gordon were so dilapidated they had settled into the ground and the floors sloped … if you dropped a pair of rolled-up socks they’d roll all the way to the other end of the bay.

We have a wooden barracks of that era at the Pima Air & Space Museum, where I’m a volunteer docent. It used to be one of the exhibits, open to the public, but it eventually became so rickety they had to close it for safety reasons, and one day soon they’ll tear it down.

Well, happy Father’s Day, all you dads. Sure, it’s a Hallmark holiday, but it’s ours!