In that instant they felt an overwhelming sense of pride and accomplishment. Though they had failed dismally even to come close to the expedition’s original objective, they knew now that somehow they had done much, much more than ever they set out to do.

I’ve read a lot of contemporary adventure writing, and all of it has been exciting and good, but this narrative, written in 1959, is of another age. That is a good thing. A contemporary writer would have burrowed deep into Shackleton’s head, unearthing (or simply making up) personal quirks, foibles, self-doubts, and sexual fantasies; he would have probed the personal conflicts between expedition members, poking at them until they burst; he would have made his book two or three times longer than this one, lingering on each individual long lonely day on the ice. He would have sensationalized the sad fate of the expedition’s sled dogs.

Not our man Alfred Lansing, a man of the mid-20th century, no sir. Lansing recounts the historical facts, dispassionately describing the travails of the exploration team and the dangers they faced and overcame in a simple, linear, straightforward manner. Shackleton’s 1914 Antarctic Expedition was incredibly daring and audacious; Lansing’s simple recounting of what happened, laid out in the order in which events occurred, emphasizes what an incredible story the team’s survival really is. Any more would have distracted from the story itself, which will stand on its own for all time.

Endurance is a riveting read from cover to cover. It never bogs down. It’s reawakened my interest in old school adventure writing, and now I want to re-read some of the exploration epics I consumed in my youth. Were they all this good? 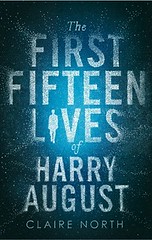 It would be easy to pick at this novel, to gripe that the basic idea’s been done before, to point out that the reader is asked to believe the unbelievable, to make fun of the classic good guy/comically evil guy conflict at the center of the plot, blah blah blah … but I can’t. I just can’t. Claire North’s story is too damn good for that.

One always looks for logical inconsistencies in time-travel science fiction. Claire North’s logic, once the reader agrees to go along with the premise that a few individuals among us live the same lives over and over again, remembering their previous lives in full, is meticulous and thorough. I had a hard time wrapping my head around the method the ouroborans, as they call themselves, employ to to communicate over centuries with past and future generations of their tribe, but it makes sense, and also makes possible a chilling science fiction adventure of the James Bond variety, with a malignant genius set on achieving his own goals, even if it destroys the world.

Harry August lives the same life again and again. By his third life he realizes what he is. Others of his kind contact him and he resolves to live his lives to the fullest. He learns, at great cost to himself, the value of keeping his secret knowledge to himself. He learns that it is almost impossible to change the future in any meaningful way. But then, in subsequent lives, the future does change in meaningful ways. And he thinks he knows who is responsible.

I know, I sound like I’m doing what I said I wouldn’t do in the first paragraph, picking at this novel. But I’m not. When I say it has a James Bond-worthy evil-genius-bent-on-destroying-the-world plot, I mean there’s a superlatively engaging edge-of-your-seat page-turning James Bond-worthy evil-genius-bent-on-destroying-the-world plot.

This is brilliantly crafted science fiction with believable characters and a gripping plot, intellectually satisfying and fun to read. I want more. 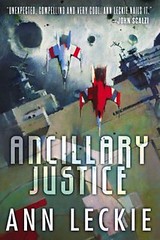 Space opera in the grand tradition. Ann Leckie’s world building is one of the great attractions of this book; reader reviews mention it again and again. So is Leckie’s exploration of the human intelligence/artificial intelligence theme; in her world the differences are very small indeed.

Ann Leckie could easily have written an 800-pager, explaining and exploring the ins and outs of Radch society; how ancillaries are created; what happens to AIs when their ships are sent to the scrapyard, why the Radchaai don’t use gendered pronouns, etc. But she doesn’t; instead, she immerses us in her world and lets us figure it out … and I liked that.

Things I didn’t like: not understanding why Breq, the last human-bodied ancillary of an interstellar warship AI, didn’t simply wink out of existence when the rest of itself, the warship Justice of Toren, was destroyed. Not understanding why Breq decided to save Seivarden’s life the first time, or why Breq jumped off the glass bridge to save Seivarden a second time — Breq was on a mission, after all, and Seivarden was at that time merely a distraction. Not understanding why Anaander Mianaai, the ruler of the Radchaai, didn’t instantly vaporize Breq at the Station the second she realized what Breq was.

I would have liked to read about the lives of normal people in Leckie’s world. The few humans we meet are scions of wealthy houses, the 1%ers (and just as insufferable). I’m not even sure Anaander Mianaai was human; I read into the text an implication she was an AI too … I’m still mulling that one over (hope that’s not a spoiler for anyone). 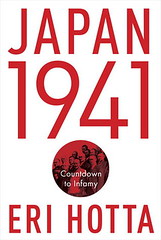 The edition I read, a hardcover by Knopf, contained photos from another book: interleaved with pages of relevant Japanese and Pearl Harbor attack photos were pages of photos of American actor Jack Nicholson at different stages of his film career. I haven’t seen this mentioned in reviews, and now I feel I should have stolen my library copy … it might have been the literary equivalent of the upside-down airmail stamp from the 1920s!

Eri Hotta’s history will fascinate anyone with an interest in the Japanese expansion prior to WWII, as well as the leadership’s decision to attack the USA. With the exception of a leader determined to attack another country for purely egotistical reasons … for indeed Hirohito was no George W. Bush … the actions and views of subordinate Japanese leaders and military chiefs presage those of their American successors during the lead up to the invasion of Iraq.

I was aware of some of the leadership issues Eri Hotta expands on. What I did not know was how enthusiastically the Japanese population, suffering recession and hardships at home as a result of Japan’s occupation of China and Manchuria (which had been going on since 1937) greeted news of the attack on Pearl Harbor. Here, at least, Japanese history differs from that of the US, where few people were happy about the invasion of Iraq.

Eri Hotta manages to weave hundreds of minor and major details into a coherent whole. Her history is clearly written, engaging, and easy to follow. 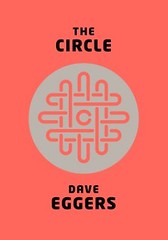 I really should give The Circle two or two-and-a-half stars, but something about the story engaged me and kept me turning pages all the way to the end. I enjoyed the read, and by my standards that’s three stars.

What kept me turning pages? It certainly wasn’t Eggers’ characters, who are paper cutouts, as two-dimensional as they come, there only to advance the statement Eggers is trying to make. Nor was it Eggers’ technical knowledge of the inner workings of cyberspace or the social media industry, which is not much deeper than my own. Nor was it Eggers’ subtlety, because he’s as ham-handed as they come. No, I kept turning pages to find out what the main character’s tipping point would turn out to be, the point at which Mae would finally say, no, you’re loading too many time-wasting social media interactions and mandatory zings on me; no, you’re asking me to share parts of my life that I insist on keeping secret; no, what you’re doing to my family and friends is wrong, no, you may NOT follow me into the restroom! Actually … perversely … the thing I liked best about The Circle is the ending. Without wanting to spoil it for anyone, I’ll just say it’s dark.

I read The Circle concurrently with Aldous Huxley’s Brave New World. The two novels have much in common: both are near-future dystopias; both posit unhealthy developments based in current social, scientific, and economic trends; both focus on one or two big-picture issues while ignoring others; both employ a minimum number of characters … most bent on advancing whatever horrible new trend is making the future unlivable, one or two rebelling against it, trying to stave off the inevitable.

When the company’s CEO announces a plan to embed chips in all children … all children in the world … and then track them throughout their lives, everyone cheers. Not one person says hey, wait a minute. Now perhaps you see what I mean when I say Dave Eggers is ham-handed. His people aren’t of this world, where we can’t even get consensus on vaccinating kids against polio and smallpox. Eggers’ people exist to convey Eggers’ message, which is that we should push away from our laptops and desktops and tablets, take a vacation from Facebook. Good advice, but trivial. He’s hardly the first to offer it, but he offers it in a fun way with this little novel.

Don’t expect life-changing insights or William Gibsonesque cyberspace adventures, and you will probably have as much fun reading The Circle as I did. If, on the other hand, you’re looking for dystopian reading with great characterization, technical knowledge, and realistic scenarios, read Margaret Atwood (Oryx & Crake) or Paolo Bacigalupi (Ship Breaker). 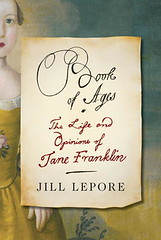 Book of Ages: The Life and Opinions of Jane Franklin
Jill Lepore

I thought Jill Lepore’s historical speculation would be interesting, and perhaps to most readers it will be, but after a few chapters I had to admit it wasn’t doing anything for me. Certainly no fault of the author’s … but I have read other histories of the period and know a bit about Benjamin Franklin, and it didn’t look to me as if I would learn anything new here. Jane Franklin, Ben’s little sister, didn’t leave much of a footprint: little is known about her, and apart from a few semi-literate letters to her brother, there’s just not much to go on. Jill Lepore makes much of the few scraps of information available to her, but frankly a lot of what I read was filler … known accomplishments and quotations of Jane’s famous brother Benjamin.