Friday, 13 days after it hatched, one of our hummingbird chicks left the nest. I think I saw it go … as I walked underneath the nest that afternoon I saw something fly away out of the corner of my eye. I thought at first it was the mother, but when I looked up at the nest only one chick peered back at me.

I never saw either chick flapping its wings. In past years, I’d observe chicks working their wings a day or two before they tried to fly, so I was surprised to find one had already flown away. The remaining chick isn’t flapping either, at least when I’m watching. I only check the nest once or twice a day, so it’s possible I just haven’t looked at the right moment. I hope that’s the case, and that the one that left the nest is somewhere nearby, making it on his or her own. I hope chick number two succeeds as well. I refilled the hummingbird feeders, doing my bit to help the cause.

Saturday morning I rode my bicycle from Reid Park to downtown Tucson and back; it happened that the University of Arizona was hosting a car show on campus, so I stopped to look. Not too many classics or antiques, mostly hot rods, but hey, I like hot rods too, so I had a great time. Here are a couple of my photos (there are several more on Flickr in an album titled U of A Car Show 2014):

Sunday was a hashing day: I was the hare, and Donna and I hosted the pack at our house afterward. You can click here to read about our day with the Hash House Harriers.

Also over the weekend I made some decisions about my next motorcycle adventure. My original plan was to ride to Sturgis in August for the annual Black Hills Rally. But then my son asked about riding with me to southwestern Colorado for the Four Corners Rally, so I’ve been mulling over the two choices. I can’t afford to do both trips, and after much thought I decided I’d rather ride to Colorado with my son.

Donna signed up for a sewing workshop in St. George, Utah, from 18-20 September. The dates don’t coincide with either rally (Sturgis is 4-10 Aug, Four Corners is 29 Aug-1 Sep), but I don’t like crowds anyway. I’ll drive Donna to Las Vegas, trailering the Goldwing behind, and we’ll both stage out of there, using our kids’ house as our base of operations. Donna can take the car to Utah for her sewing event, and Greg and I can ride to southwestern Colorado. When we get back I’ll pick up Donna and trailer the bike back home. Or maybe I’ll put Donna on the trailer; we’ll see.

I figure it’ll be a five-day ride (Sturgis would have been at least six): two days to ride from Las Vegas to Colorado with one night at a motel somewhere in eastern Utah, two nights with friends in Ouray, including one whole day to ride the Telluride/Silverton/Durango area, two days back to Vegas. The Sturgis trip would be solo, and I’d have to stay in motels every night. Riding to Colorado, where I have friends we can stay with in Ouray, will mean just two nights in motels. And I know the riding will be top notch. Also, riding from Tucson to Sturgis in August will be like sitting in a convection oven for at least half the trip. Riding from Las Vegas up into higher elevations in Utah and Colorado in September will be much more pleasant.

It may be that Greg won’t be able to go with me. He’s still trying to figure out if he can. But if he can’t, I’m fine with going solo. Donna will be able to do her sewing event in St. George, then spend a couple of days with the kids in Las Vegas waiting for me to get back from Colorado. At any rate, I now have a plan for my next gypsy tour! Sturgis? Maybe some other year.

Our Monday night walks in downtown Tucson are getting harder to do. The two friends we normally walk with are bored walking the same route every week, and I have to admit we’re beginning to tire of it too. As downtown Tucson revitalizes, parking gets increasingly difficult, and the homeless are a constant problem. So we’re going to try walking in Reid Park Monday nights, at least for a while. It’s closer for us, parking is plentiful, and the park is a great place to walk or even ride bicycles … in fact I’m planning to take my bike along tonight. The older I get, the stiffer I am walking. If it’s not my hips hurting it’s my lower back; I have to walk almost three miles before my body loosens up and quits hurting … but none of this is an issue on a bicycle, so maybe it’s time I switch to riding on Monday evenings. This time of year, at least, darkness won’t be a problem, and if I’m still riding when the days get shorter again, I can always put lights on the bike. We’ll see.

I ordered two watch bands from Amazon. Donna needed a replacement strap for a favorite old watch; I needed one for my fancy aviator watch, but decided to switch from leather to metal for the first time. 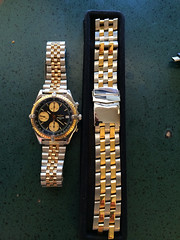 Donna’s band was a snap; figuring out the correct band for my watch took most of an afternoon and it turns out I guessed wrong: although the width is right the pin holes are in the wrong location and it won’t mount to my watch. I spent an hour with the watch guy at the BX; after he admitted defeat I stopped at an off-base jeweler, who couldn’t make it fit either. Finally I agreed to buy one of his watchbands … not exactly the one I wanted, but close enough. The watch, with the band I eventually had mounted, is on the left; the band I really wanted, the one that doesn’t fit, is on the right.

Now I have to send the original back to the third-party Amazon vendor, which looks like it’s going to be at least as hard to do as it was to was to pick a band in the first place. I hope, though, the Amazon vendor will be able to find the band I wanted with the pin holes in the right location for my watch. I sent him an email with my watch information. You can probably see from the photo why I picked the band on the right: it’s wider and thus more manly. Call me a poseur if you want, but a manly watch needs a manly band!

You know what? I think I’m going to kick back and take it easy today. It was a busy weekend.