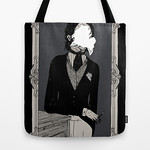 The lingering-at-the-nest hummingbird chick I was worried about? It flew off Monday. The guy who does our yard work every month told me they’ll continue to come back to the nest for a while after they learn to fly. It flew off for good when he fired up his leaf blower, heading for the big mesquite tree between our house and the highway … clearly it had flown before and knew where it was going. Good luck, new hummingbirds. I’ll keep the feeders topped off for you.

Donna’s away, visiting our goddaughter Natasha and god-grandaughter (grand-goddaughter?) Giorgi in San Jose. I dropped her off at the airport Wednesday afternoon; I’ll pick her up when she flies home next Wednesday. So it’s me and the dogs and the cat, roughing it for a week. The dogs and I are a little mopey. I can take the dogs’ minds off Donna by giving them baths today and taking them to the dog park and feed store Friday. As for myself, hosting Saturday’s book club, then going riding on Sunday’s bicycle hash will help. After the weekend, though, we’ll all return to feeling sorry for ourselves. The cat? Who knows what it thinks, or if it has emotions at all?

I’m trying to let news of political ratfuckery (a technical term with a defined meaning) wash over me, since it always happens and there’s nothing I can do about it. I really resent it, though, when the GOP makes me feel sorry for Hillary Clinton, a corporatist establishment candidate even more corporatist and establishment than Barack Obama (at least Obama didn’t vote to invade Iraq). What ratfuckery, you ask? Try this: 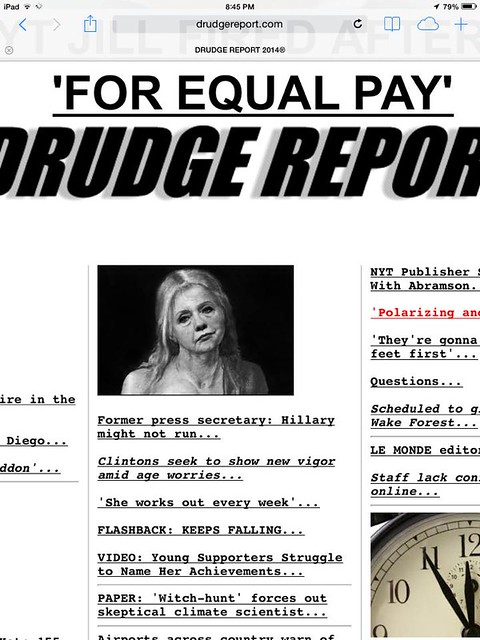 So that happened (I took the screen grab myself yesterday afternoon). Probably what inspired Drudge to try his hand at photoshopping was Karl Rove questioning whether Hillary Clinton is fit for office, then implying she suffered a traumatic brain injury after her fall last year. I really really do not want my next presidential choice to be Hillary Clinton, but now I feel I have to defend her by voting for her. God damn you Karl Rove!

I’d rather vote for Gabby Giffords, who really did suffer a traumatic brain injury and who has been entirely up front about it, even if it means her husband, Mark Kelly, would be the shadow president. Shit, I like him too. Gabby & Mark for president!

Gah, enough. Let’s talk television. When I really like a show I set up the DVR to record the entire series. One, to watch shows when I want to watch them. Two, to be able to fast-forward through commercials. Three, to cancel recording them when I realize they’ve been available to me all along on HBO on Demand or streaming TV.

The shows I’m DVR’ing these days are FX’s The Americans and Fargo, and HBO’s Game of Thrones. To a lesser degree I’m taping Fox’s Cosmos (I’ll explain what I mean by “a lesser degree” in a minute). Both FX shows are on late at night; by taping them I can watch them at a reasonable time the following evening (and zip through the commercials, which run often and hard on FX). HBO’s GOT, OTOH (see what I did there?), comes on too damn early Sunday night, so I tape it to watch later that same evening.

Since Fox’s Cosmos comes on Sunday night while I’m still watching GOT on tape, I tape it as well and watch it after GOT. I’m losing interest in Cosmos, though. I DVR it because I support Neil deGrasse Tyson’s efforts to reach that vast know-nothing audience that otherwise sees only what Fox News shows it. I’m familiar with most of the concepts Tyson covers, and put off by the childish animated segments Cosmos uses as filler. I’m about to take it off my DVR schedule. I had started taping another Sunday night show, HBO’s Silicon Valley, but it didn’t hold my interest. It’s available through HBO on Demand, so I can always come back to it later.

As for streaming TV (we subscribe to Amazon Prime and Netflix), our favorites are 1) the Swedish version of Wallander, 2) the BBC version of same, 3) the American version of House of Cards, 4) BBC’s Doc Martin. We’re slowly working our way through Mad Men, Doctor Who, and a few other series everyone but us has seen, so no spoilers please.

I gave up on Jon Stewart and Stephen Colbert a few months ago. Not because they’re not consistently funny, but because they’re merely that — funny — when they could be encouraging citizen activism. John Oliver’s new show, Last Week Tonight, is likewise funny — Jon Stewart and Stephen Colbert with tits and dicks — but ultimately if people just watch these shows for the laughs and keep voting for the same corrupt politicians who sell us out to big money, what purpose do these shows serve, other than to keep us from rising up in open rebellion? Gee, I wish George Carlin were still around.

I’ll say it again: Giffords and Kelly 2016! Say it with me, people! Hey, maybe we can get something going here.