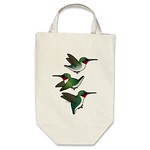 I thought it would take longer, but the hummingbird chicks are already out of their eggs. The photos are dated, so it’s easy to count the days. Mama bird laid her first egg on the 6th of April. She laid the second one a day later. Yesterday, the 27th of April, there were two chicks in the nest, probably hatched that day or possibly the day before: about 20 days from egg to chick. Fast work, mama bird!

But then again, hummingbirds do everything fast.

The new kids look more like baby chickens than hummers. Their beaks are short, shaped for breaking out of an eggshell. In a week or two they’ll begin to elongate, and then they’ll look like what they are.

I’ll try to track how long it takes until they fly off. It’s sad, but I expect only one of the two chicks to make it. I think that’s how it goes with baby hummingbirds. A few years ago, when I followed the hatching and growth of two other hummingbirds, one fell from the nest on its first attempt to fly and died shortly afterward. The other one made it and is quite possibly our current mama bird.

I see that I posted a photo of the first egg on the 6th of April. I never posted the photo of both eggs I took on the 8th, so I’ll include it here, along with yesterday’s photo of the chicks. Click on the images to see them full-sized on Flickr:

Both those photos were taken with our second-best camera, a point-and-shoot Canon G9. The nest is just a few inches underneath the patio roof, too tight a squeeze for the big Canon Rebel SLR. But as you can see the G9 takes a very good photo.

Speaking of photography, I’m delighted with the camera on my new iPhone. I don’t know the specs, but it’s so far beyond what cell phone cameras used to be it might as well be an artifact left behind by a time traveler. Here are two iPhone shots from this past weekend:

A kindly server took the first photo Saturday morning: our Trail Trash bicycling gang at the Coronet, a sidewalk cafe recently opened in the old Coronado Hotel at the south end of 4th Avenue. We rode our bikes down from St. Philip’s Plaza on River and Campbell; including the ride back it was an easy 12-miler (headwind down to work up an appetite; tailwind back to make us feel Fredly and spandexy).

The second photo is our old patio furniture strapped to the trailer for a trip to Mary Anne’s curb on Sunday morning. We live in the county, not the city, which means our garbage company doesn’t pick up big garbage. In the city, where Mary Anne lives, they’ll take anything left on the curb on two designated days a year. Today is that day, so yesterday we loaded the old patio chairs and dropped them off on Mary Anne’s curb. Within half an hour, Mary Anne told us, a garage sale cruiser stopped and took them all away. Sorry, garbage company, no chairs for you after all.

In the photo the chairs look pretty good. They’re only ten years old, so the metal and paint is still fine. It’s the webbing that’s shot, rotted from the sun. There are ten chairs total (two more are in the back of my Trailblazer); it would have cost $75 per chair to have them rewebbed, or $750 total, which is simply insane when Home Depot or Lowes sells complete new sets for a couple of hundred bucks. Presumably, whoever took the chairs from Mary Anne’s curb will do the rewebbing themselves at a lower cost, then sell the chairs for a small profit. Trickle down, baby.

That’s it for this morning. Check back for hummingbird chick updates!