I’m a Slow Learner, But I’m Getting There

You want to hear conservatives howl, talk about the link between conservatism and racism. As I did yesterday when a friend linked to the Cliven Bundy story. And I should have known better. 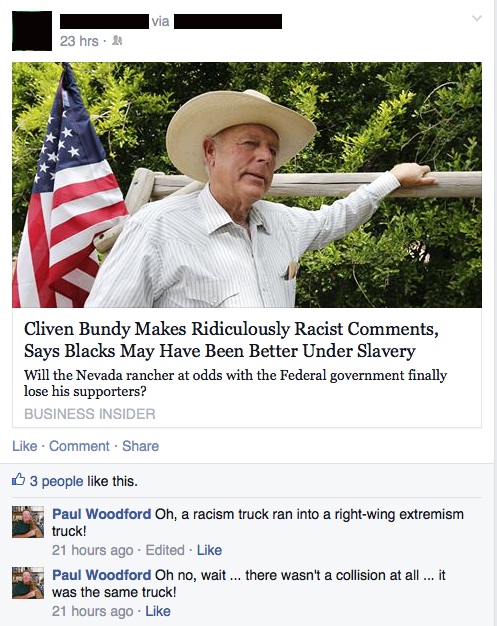 No one wants to be called a racist. Least of all a conservative. And two of them leapt into the fray with the latest version of the right’s You’re the Real Racist script: 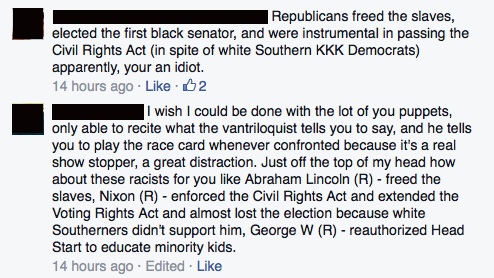 The link between conservatism and racism is so well established it is to me a given. Yes, it is possible to draw distinctions between, say, fiscal conservatism and racism, but are there any progressive racists? From the die-hard segregationist governors and sheriffs of the former slave states to today’s Tea Partiers, from Nixon’s Southern Strategy to Rick Santorum’s “I don’t want to make black people’s lives better by giving them somebody else’s money,” from Mike Huckabee associating Barack Obama with the Mau-Maus to every birther ever, racists are conservative.

I’ll grant that everyone is racist to some degree, me included. Anyone who is even aware of the differences between what we still call the races is racist. People who act on their racism, though — those who want to keep the races separate, those who want to elevate their own race above others, those who want to tell you what they know about “the negro” — those people are conservatives and always have been.

I’m a fool for attempting to spell this out, because conservatives aren’t listening. They know the “we’re not racist because Abraham Lincoln was a Republican and liberals are the real racists because George Wallace was a Democrat” line is an idiotic attempt at misdirection. But it’s become a tribal chant and it pisses liberals off, so they’re just going to keep on yelling it. You can’t argue with people who chant. You’re not going to make any headway with people who are motivated by spite. You can’t change a racist.

So rather than waste my time arguing with racists, I’ll put my energy into voting and encouraging my friends to do the same. It’s the best way put the hillbillies and crackers back in the box where they belong.