Some time last week it got cold. No autumn lead-in, just straight to winter. Oh, maybe a little: over a ten-day period nighttime temperatures started dropping down into the 40s, but we were still hitting 90 during the day. Nothing I would call autumn, in any case. Then, wham, it’s freezing at night and everyone is wearing jackets during the day.

In solidarity with our northeastern friends, suffering from Hurricane Sandy and the nor’easter that followed, we gutted out the first morning. On the second morning I said the hell with that, put on my bathrobe and slippers, and padded down the cold hallway to turn on the furnace.

Something told me it was going to get cold so I wrapped the outside pipes. It went below freezing that very night. Behold my virtue, an ant among grasshoppers, putting grain away for the winter and radiating smugness. Now waiting for local conservatives to announce, once again, that colder weather in Tucson proves global warming is a hoax. Oh, how I wish it were. Oh, how I wish the scientists and Al Gore had called it “climate change” from the very first, as they do now … it might have been an easier concept to explain to the dummies.

With winter comes our first batch of Uncle Art’s beans, simmering on the stove as I write. These are old school beans, soaked overnight and cooked with basic ingredients, no chili cook-off flourishes or exotic spices. Simple, tasty, filling. And corn bread! Honestly, I don’t remember Uncle Art serving his beans with corn bread, but it seems to me he must have … certain things just go together. If you’d like to see the recipe, click here.

One of the large mesquite trees on the back side of our property split in half two years ago, maybe after a lightning strike but probably from its own weight after a strong burst of wind. We cut up the downed part of the tree with a chainsaw and built a woodpile. We have a portable outdoor fire pit, and this winter I intend to put a serious dent in the woodpile. I’ve already started: 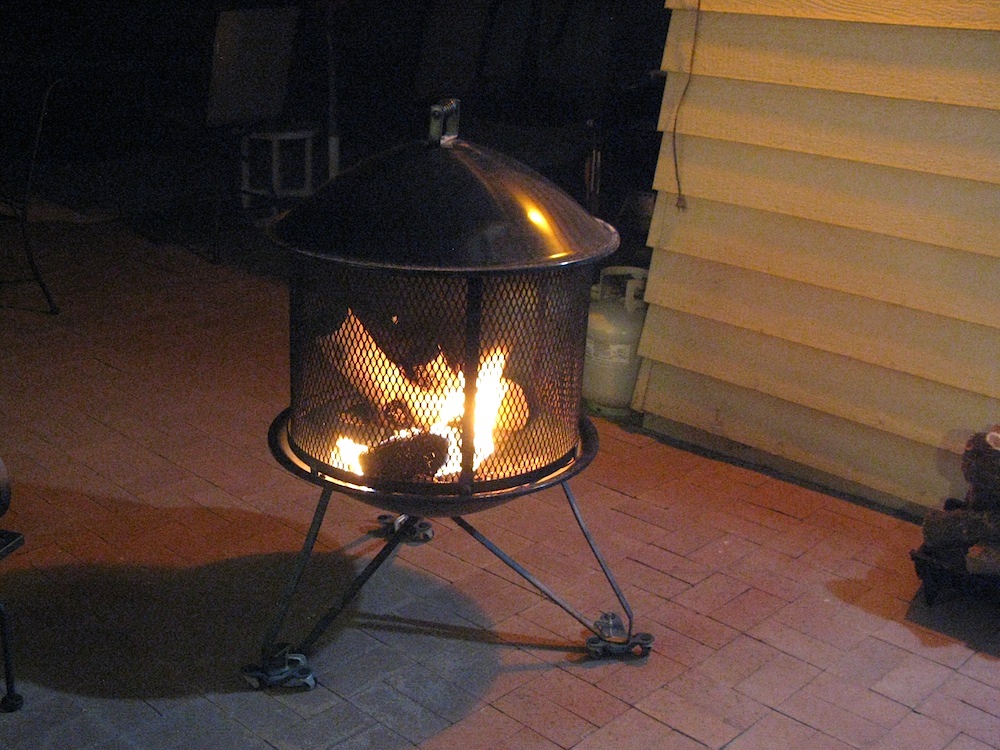 So what else is going on? Polly’s riding her motorcycle to work every day now, and so far, so good. I led her on a run through Vail and up Old Spanish Trail last weekend, trying to teach her a few things about maneuvering through curves. She’s still riding cautiously, and long may that last. Our friends in Marin, the ones who were in that horrible car accident in late October, are both in rehab facilities now, mending and doing well. I had planned a solo motorcycle trip to Colorado in the spring but now I think … if they’re up for it … I’ll ride to the Bay Area instead to see how they’re doing, then maybe explore a bit more of the northern California coast.

Our son, daughter in law, and grandson will be here for Thanksgiving. Our friend Martha will be here as well. Donna’s going to roast the traditional turkey and I plan to smoke a hillbilly ham. Because Fortress of Smoke™, right, men?

Went to see Cloud Atlas last week. Normally I’d review the movie straight away, but in this case I think I’ll re-read the book and watch the movie a second time before putting my thoughts in writing. I will say this: I initially resisted the directors’ use of a few actors to play different characters at different times, but as the movie went on I changed my mind. Also this: a lot of readers put the book aside during the first chapter, unwilling to wade through the Moby Dick-like 19th century sea voyage and thus never getting to the chapters they would have loved; the Wachowskis wisely broke the chapters into much smaller segments. I always felt the book had something important to say; what, exactly, is hard to pin down. The movie is probably as good an adaption of the book … and the book’s message … as anyone could have made.