We were having company Sunday.  I wanted to barbecue, but Ditalini wanted Italian food.  So we compromised by having an Italian barbecue.  Here’s the menu: 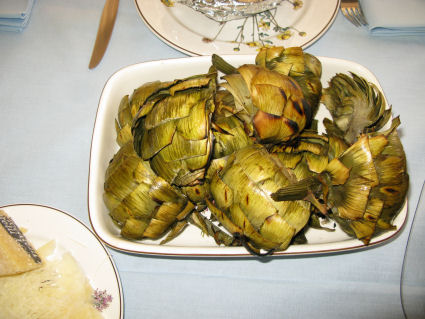 We prepped the artichokes a couple of hours before the party by cutting the spiny tips off the leaves, then boiling them until tender.  After taking them out of the water and letting them drain and cool down, I quartered each artichoke and removed the choke with a spoon.  Next I brushed each quarter artichoke with olive oil and sprinkled them with salt and pepper, making sure I got all sides.

When it was time to barbecue, I used a spatula to place the artichokes on the grill.  The artichokes, already cooked, were tender and fragile, so I was gentle with the spatula, turning them to grill all sides.  When the artichokes were nicely marked from the grill, I put them on a platter and kept them warm in the oven.  Ideally, you should serve them right away as appetizers, but our friends brought several different appetizers, so we served the artichokes with dinner. 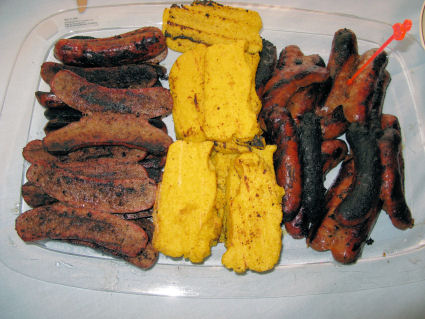 First, we boiled the polenta . . . as with the artichokes, this was part of our prep routine, a couple of hours before company was due to arrive.  When the polenta was cooked, Ditalini put it in bread pans and let it cool.  While I was grilling artichokes, she inverted the bread pans over a cutting board so that the polenta came out in loaves, then cut the polenta into half-inch slices.  I grilled it, using a spatula to turn the slices.  Since the polenta was already cooked, all I needed to do was make the outside surfaces crispy.

But before putting the polenta slices on the grill, I grilled the sausage.  We used mild and sweet Italian sausage.  I cut each sausage lengthwise, as you can see in the photo, so that they would lay flat on the polenta when served and also because the oil in the sausage drains out faster that way.  I was careful to keep the sweet sausage on one side of the grill and the hot on the other, and later, when the sausage was grilled, I kept the two kinds of sausage separate on the platter, as in the photo. 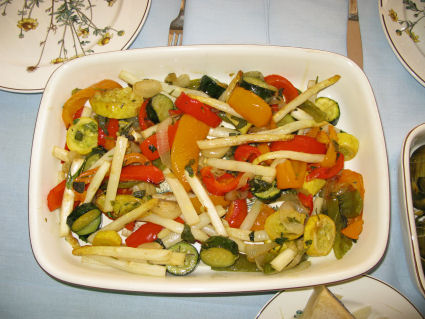 When I’m grilling for the two of us, I use an old pan with a metal handle on the grill to keep the vegetables from falling through the grating, but since we were preparing a lot of veggies for a lot of people (and since I was hogging the entire surface of the grill with sausage & polenta), Ditalini decided to roast them in the oven instead.

Either way, what we do is cut up some good looking vegetables — onions, whole garlic cloves, sliced & seeded red, yellow, and green bell pepper — drizzle a little olive oil on them, then sprinkle with salt & pepper.  Ditalini, as you can see, added zucchini and white asparagus.  When I grill veggies, they cook fast, and I have to keep an eye on them lest they burn.  Roasting took about 20 minutes at 425 degrees.

How to serve grilled sausage & polenta: place a slice of polenta on your plate, then a slice of mozzarella cheese, then a sausage, then a little parmesan cheese.  If you have leftover polenta, fry it in a little butter and have it with your eggs for breakfast.

If all this doesn’t have you humming “funiculi, funicula,” come back and read this entry when you’re hungry.

A Meme for Breakfast