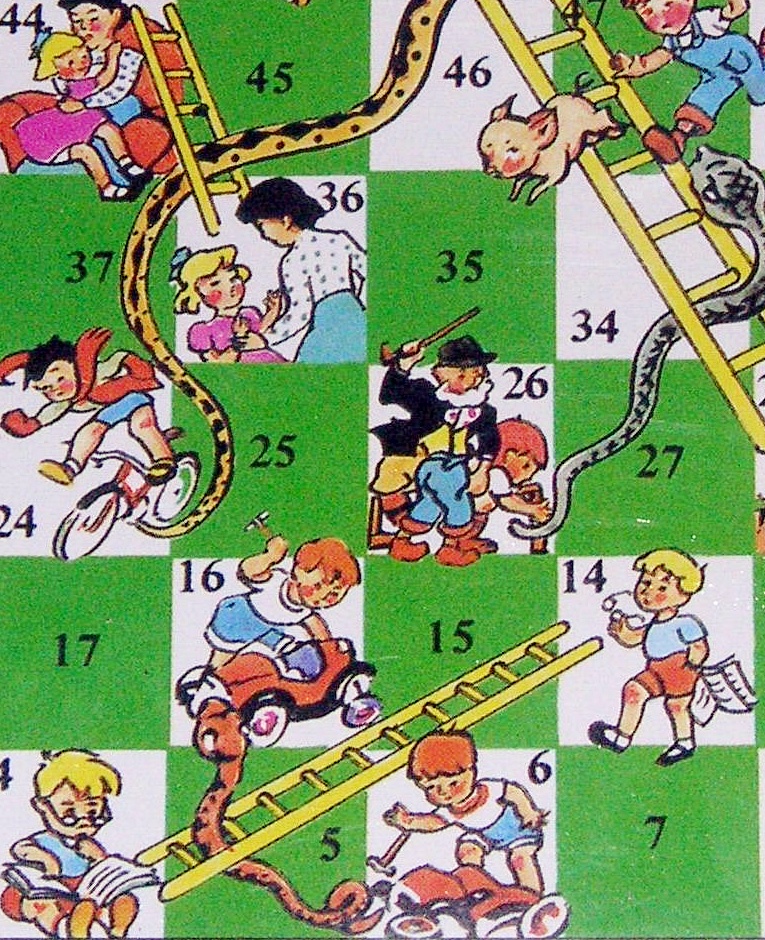 Consider the great gains we’ve made in this country: from universal suffrage to civil rights, from labor unions and protections for workers to minimum wages and unemployment insurance, from Social Security to Medicare, from free public education to womens’ athletics, from good highways to the postal system.  If you follow the news you know that every one of these achievements is also a target, fixed in the sights of Republican presidential candidates and legislators who, if we don’t prevail over them, will reverse the gains and take us back to the days of feudalism, wage slavery, and ignorance.

I still believe the arc of history bends toward justice, but at the same time I have to acknowledge that losing what we’ve gained is a distinct possibility.  That’s why I plan to vote, and to encourage my progressive friends to vote … no matter how discouraged I get.

Snakes & Ladders is a terrible analogy.  Whether we succeed as a society isn’t determined by a throw of the dice; neither is individual success or failure in life.  We can pick our ladders and avoid the snakes.  Except for the ones we can’t, damn it all: just last week a lovely woman we know died of cancer, and another friend confessed that the cancer he’s being treated for is much worse than he ever let on before.

And when it comes to Afghanistan, all I see is snakes … there are no ladders left, if there ever were any.  It is as if we learned nothing from our experience in Vietnam.  Relations between Afghans and US troops have reached a level of toxicity where nothing positive can be accomplished.  I just hope our military planners are working on a way to get US and NATO troops out of the country with minimal loss of life, and that President Obama has the moxie to stand up to the military-industrial complex and the knee-jerk Republicans who’ll call him a quitter if he decides we need to withdraw now.  Sadly, I don’t think he’s capable of that kind of decisive leadership.  We’re gonna ride that snake all the way down.

Well, aren’t I the gloomy Gus?  You’d never guess from any of this what a great weekend I just had.  Friday night I cooked a yummy catfish dinner.  Saturday I went on a long bicycle ride with friends, scouting trail for an upcoming hare & hounds ride.  Sunday I laid trail through our neighborhood for a running and walking group, then hosted the pack at our house for a post-trail barbecue.  Donna’s back from California, our son had a birthday, our daughter is working again, and we finally have new neighbors in the long-empty house next door.  It’s spring in Arizona!

Oh, and Rick Santorum compared my home town — Cape Girardeau, Missouri — to Mecca (lest there be any doubt over Rush Limbaugh’s continued importance to the Republican Party).  It wasn’t that long ago Arizona racists were up in arms over TV meteorologists using the militant Islam word “haboob” to describe a dust storm.  I wonder what they’ll think of Rick Santorum giving Mecca the old terrorist fist bump?  No doubt they’ll all turn against him.  Right?

One thought on “Snakes & Ladders”