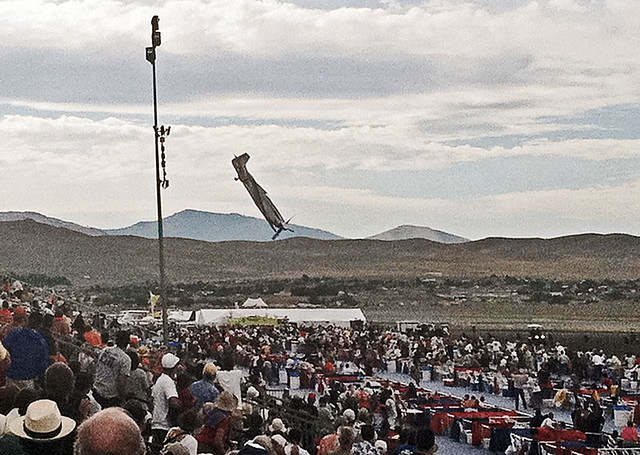 In the aftermath of an airplane crash all manner of misinformation hits the news.  It’s even worse if there are a lot of witnesses.  You’d think it would be otherwise, but people are in general terrible witnesses, especially when they see something shocking and violent, something that happens in the blink of an eye.

Last night and again this morning, in the wake of yesterday’s P-51 crash at the Reno Air Races, TV, radio, and newspapers were quoting witnesses stating that the pilot “spun out of control,” that he “wobbled his wings first,” that he deliberately “steered the plunging aircraft away from crowds.”

Eyewitness reports like these are almost always mistaken.  When witnesses use phrases like “spun out of control” or “wobbled his wings,” they usually mean something quite different from what a pilot means by spin, out of control, or wobble.

The accident sequence, from the instant the pilot pulls up out of the race to the instant he hits the tarmac, lasts 8 seconds.  When you watch the videos that have been released so far (here and here), it’s clear the pilot didn’t try to avoid anything … far from it, he plunged into a seating area in a near-vertical dive.  There’s no “wobble,” no “spin.”  In the first video, in fact, the aircraft appears to be in controlled flight.

Until the crash is investigated and a cause determined, we won’t know what happened … the airplane could have had mechanical or control problems, the pilot could have lost consciousness from excessive G forces or experienced some other physiological crisis.  But I can’t resist a little shameless speculation.

First, there’s this, a still photo of the aircraft just before impact: 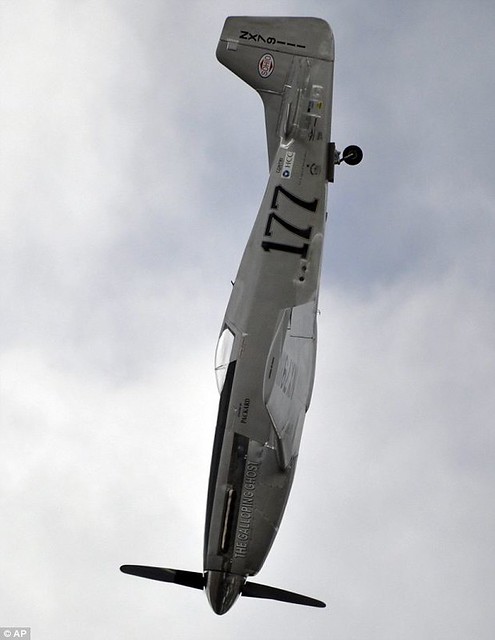 And this, a photo of the same aircraft taken earlier: 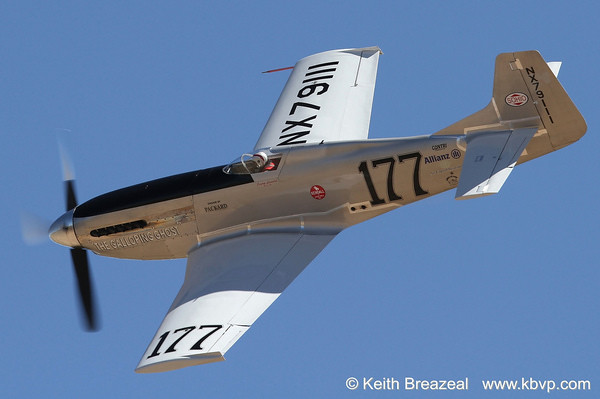 You can’t help noticing the pilot’s helmeted head in the bottom photo, right in the center of the canopy.  Those Mustang cockpits are small to begin with, and when they modify these old fighters for racing they replace the normal canopies with tiny little teardrop bubbles.  If the pilot sits in any sort of normal position, his or her head is going to be visible.  Does the top photo, then, suggest a problem?

Then there’s this, another still photo taken as the aircraft rolled invented, just before it pulled down toward the ground: 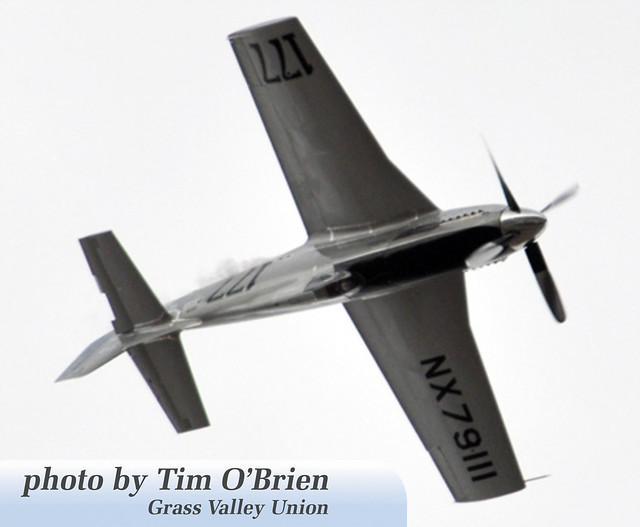 In this photo, you can see a puff of smoke coming from the belly of the Mustang behind the cockpit area, and you can also see the trim tab is missing from the left horizontal stabilizer.  I don’t know if losing a trim tab on a P-51 flying at 450-500 miles per hour is enough to override the pilot’s muscle power on the stick … I sort of doubt it, but clearly something is going on with the flight controls.  And what about that smoke?

Last night, in the immediate aftermath of the crash, everyone thought the pilot was 80 years old.  On the Rachel Maddow Show, where the crash got nearly a half-hour of coverage, Rachel and her guests avoided speculating on age as a contributing factor but still managed to mention that erroneous age, oh, about 300 times.  On Twitter, people weren’t at all shy about making the connection: “YGBSM pilot was effing 80 yrs old?” was a typical tweet.

This morning we learned the pilot was actually 74.  Still pretty damn old, and you know people are going to start calling for age limits on pilot licenses, particularly if it turns out this pilot blacked out out under G loads or had a heart attack.

Until very recently, airline pilots had to retire at age 60.  Today the age limit is 65.  But if you’re not flying airliners, there really is no upper age limit.  You can fly as long as you’re fit to fly.  Pilots have to pass an FAA medical examination every year or two, and without a current medical certificate they can’t fly, so it’s not like the system doesn’t police itself.  In fact, the famous air show stunt pilot Bob Hoover was medically grounded in 1992 by the FAA, when Hoover was 72.  Hoover, by the way, also flew a Mustang in close proximity to crowds at air shows.

Still, you know there are going to be calls to ground all pilots over, say, 65 years of age.  Not to mention calls to ban air racing altogether.  I can’t help thinking of Jimmy Doolittle, the most famous air racer ever, who in 1932 at the age of 36, having won the three biggest prizes of international aviation — the Schneider, Bendix, and Thompson Trophies — retired from air racing, saying “I have yet to hear anyone engaged in this work dying of old age.”

Unlike Formula One or Indy Car racing, where team owners hire fit young men to race for them, in air racing the team owners themselves do the racing.  Most of these men are older, having gotten into warbird collecting and flying after long and successful business careers, and there is a lot of ego involved.  I’m glad to hear the pilot who crashed yesterday was only 74; but I must admit that when his age was reported as 80 in the immediate aftermath of the crash I was not a bit surprised.  Unless you’re a Saudi prince, you don’t amass the kind of money it takes to buy, rebuild, and maintain a WWII warbird when you’re in your 20s or 30s.  It’s a sport for rich old men.