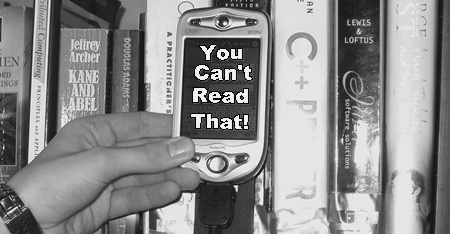 Banned Books Week (September 24 to October 1) is almost upon us. What’s it all about?  From the American Library Association’s site:

Not everyone is on board with the ALA’s “banned books” rhetoric.  A conservative columnist waves the BS flag, stating that books are no longer banned in the USA, and that the ALA’s use of charged rhetoric amounts to hype.  A progressive librarian echoes this theme, arguing that a parental challenge to the inclusion of a book on a school reading list or library shelf is not at all the same thing as an outright ban.

Another newspaper columnist defends the use of banned books rhetoric, pointing out that removing books from school curricula and libraries is in fact banning, because the intent is to keep students from reading those books.  He also points to the new trend of rewriting classics to remove offensive words.

Where do I stand?  I think the rhetoric is right on, and I’m all for Banned Books Week.

Parental challenges to books on school reading lists and library shelves are not in themselves that big a deal.  It is when schools respond by removing books that it becomes a big deal, because it amounts to book-banning.  I try to be careful to distinguish between challenges and bannings, but as far as “Banned Books Week” goes, I think the rhetoric is fully justified.

Appropriately enough, here’s my review of one of the top ten banned and challenged books of 2010:

The Absolutely True Diary of a Part-Time Indian
Sherman Alexie

Sherman Alexie’s young adult novel The Absolutely True Diary of a Part-Time Indian came to my attention earlier this year when I read about it being banned from a high school library in a town near Spokane, Washington, not far from the Spokane Indian Reservation where the novel is set. Since then, other school boards have responded to parental complaints by banning or restricting access to the book, and fresh challenges to the book continue to pop up around the country.

Arnold Spirit is a great kid, but a troubled one. His family is dirt poor; all the families on the reservation are poor. His father’s an alcoholic. Arnold is teased and bullied because he’s smarter than the other reservation kids, and he’s different (he was born with water on the brain and suffered from epileptic fits when he was younger; he still stutters and speaks with a lisp … he’s also what you would call the classic nerd, and a budding cartoonist). He realizes the only way he’ll have a future is to leave the reservation school and attend a white school in a town 22 miles from the reservation, where he’s the only native American student.

Everything about his life on the reservation and his new life among white schoolmates is hard, but he’s filled with hope. He writes about his life with insight and humor, and when he writes about the bad parts … his father’s drinking and frequent absences, hitchhiking or walking to school on the days his family can’t afford to drive him, the nights he and his family go to bed hungry, the beatings he receives from former friends on the reservation, the death of his beloved sister who burns to death in a trailer fire while passed out in an alcoholic coma … he’s frank and matter-of-fact about it, and at the same time as upset and heartbroken as anyone would be. He’s a troubled kid with a hard life. And he masturbates, like every other 14-year-old (duh).

Now that I’ve read the book, I go back to those contemptible school board members in Richland, Washington who banned the book without having read it. Would they have banned it if they had read it? I strongly doubt it. Arnold tells us he masturbates and has sexual fantasies about a girl in his high school class. He doesn’t describe these things, he just mentions them. The book is neither pornographic nor titillating — it’s just honest. If I had a troubled kid, this is exactly the sort of book I’d want him or her to read. It’s real. It points young readers in the right direction, away from trouble and toward courage, hope, and self-betterment. It’s a deeply moral book. I wish I’d had this book to read when I was 14!

Sherman Alexie maintains that attempts to keep school-aged children from learning about the harsh realities of life are “way, way too late.” In a 2011 Wall Street Journal editorial titled Why the Best Kids Books Are Written in Blood, he has this to say:

Of course, all during my childhood, would-be saviors tried to rescue my fellow tribal members. They wanted to rescue me. But, even then, I could only laugh at their platitudes. In those days, the cultural conservatives thought that KISS and Black Sabbath were going to impede my moral development. They wanted to protect me from sex when I had already been raped. They wanted to protect me from evil though a future serial killer had already abused me. They wanted me to profess my love for God without considering that I was the child and grandchild of men and women who’d been sexually and physically abused by generations of clergy. …

I have yet to receive a letter from a child somehow debilitated by the domestic violence, drug abuse, racism, poverty, sexuality, and murder contained in my book. To the contrary, kids as young as ten have sent me autobiographical letters written in crayon, complete with drawings inspired by my book, that are just as dark, terrifying, and redemptive as anything I’ve ever read.