I’m going to admit to something I probably shouldn’t: a twinge of sympathy for parents who worry that societal encouragement of gay and transgender youth might turn their own kids from the straight & narrow. I’m not sure it happens, but I get the worry. And maybe, when kids are at that stage where peers become more important in their lives than family, the age where if your friends jump off cliffs you will too, such encouragement might lead to experimentation. With gay sex, though, I expect that even if straight girls and boys do try it, it’ll be a one-time thing because it’s not them, so in the long run no harm done. But what do I know?

What I do know is that what I know about gender dysphoria will fit on the head of a pin. Is it even remotely possible that peer pressure and the social influence of trans celebrities might tempt boys and girls to think about becoming girls and boys? I want to say nope, that doesn’t happen. It’s “trans panic,” and we should all know better. But what if it did? And what if it happened with my kid? I understand the fear.

According to statistics compiled by UCLA’s Williams Center, 3.5% of American adults identify as gay, lesbian, or bisexual. Only 0.3% of adults identify as transgender. Of course an unknown number of adults are closeted and will claim to be straight when asked. There are undoubtedly other adults who’d transition if they thought they could and not suffer consequences, but they’re not going to admit it either. We’ll never know the real numbers, but the Williams Center percentages at least show their general shape.

Kids, though … have things loosened up to the point where young people feel more free to identify as LGBTQ? Most observers think so. I think so. If we’re right, the percentages of soon-to-be adult LGB and trans folks are higher.

Let’s say that with teenagers, maybe as many as 5% are LGB and 1% are trans (whether they’ve done anything about it or not). According to the Health & Human Services Agency, there are 42 million adolescents in the U.S.A. As many as 2.1 million, then, could be gay or lesbian. At most, 420,000 kids could be transgender (either transitioned, transitioning, or thinking about it). That’s not a lot, so maybe all this is a tempest in a teapot. Unless you’re one of those kids, or that kid’s parents.

There’s a woman who posts on social media under the handle “Libs of TikTok.” I believe she got her start protesting the strange trend of public libraries hosting drag queen story hours for children. She’s since gone full brownshirt. She stirs up hysteria about LGBTQ books in libraries and schools, accusing teachers and librarians of grooming and pedophilia. She crusades against hospitals that provide care for transgender patients, doxxing individual administrators, doctors, and nurses, making them targets for stalking and death threats. She’s one of the main figures responsible for whipping up the armed MAGA and militia group thugs we see on the news, attacking pride parades and school board meetings.

She’s the enemy and I hate her, but … she had a point about that drag queen shit. How and why did public libraries ever decide to start hosting drag queen story hours? I mean, they could have brought in zookeepers, ice skaters, or local chefs, am I right? Why, of all things, drag queens? Are children clamoring to see drag queens?

Yes, before you ask, I know there’s a world of difference between dressing in drag and being LGBTQ. Drag queens will say they’re performers, and that sexual orientation and gender has nothing to do with it. And they’re probably right. But what they do, when they perform in public, is at the very least sexually charged, and what kind of parent thinks taking a child to a drag show is wholesome? I mean, what the fuck?

Please forgive me. I’m not always this inarticulate. At some point, I’ll have to confess in one of my banned book posts that I’m not wholly on the lefty side of things. They’ll probably kick me off Daily Kos. 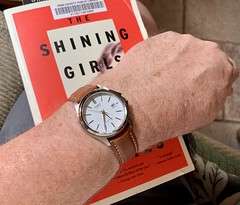 I bought an inexpensive ($28!) Casio wristwatch for everyday wear. It came with a black faux-alligator band that looked okay but also sort of cheap (duh). Last night I replaced it with the light brown leather band I got for my Breitling but hated because it didn’t go with that particular watch. Well, it goes with this one. I think it looks great. BTW, good leather watch bands are cheap: most are less than $15 on Amazon.

The book? “The Shining Girls” by Lauren Beukes. Donna and I recently watched a serialized version on Apple TV, starring Elizabeth Moss. I didn’t know it was originally a book until I saw it in the credits. I’ve read other Lauren Beukes novels and liked them, and I’m always curious about the differences between books and the movies and TV shows based on them. Two chapters in and as I expected, the book is telling a far richer story … but I still picture Elizabeth Moss when Kirby appears on the pages, and probably always will.