You Can’t Read That! Banned Book Review: This Book is Gay 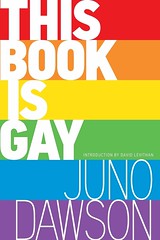 This Book Is Gay
Juno Dawson

There’s a long-running joke that, after “coming out,” a lesbian, gay guy, bisexual, or trans person should receive a membership card and instruction manual. THIS IS THAT INSTRUCTION MANUAL. You’re welcome.

“This Book Is Gay” is one of a number of young adult books targeted by right-wing culture warriors. They view it, along with other LGBTQ-themed books, as insidious pro-gay propaganda designed to lure girls and boys into deviant sex and transgenderism. This book in particular, billed as an “instruction manual” for LGBTQ youth (see the blurb, above), has been in their crosshairs for several years.

Since its publication in 2014, “This Book Is Gay” has been challenged, and sometimes banned, from classrooms and school libraries in several states. In 2021, the American Library Association listed it as the ninth-most challenged title in the U.S.A. One notable challenge and resultant banning was recorded in 2016, when the public library in Wasilla, Alaska, was forced to relocate its entire young adult nonfiction collection to restricted shelves in response to threats from the community over “This Book Is Gay”:

Several Wasilla residents attacked the book at a city council meeting saying that “they didn’t want ‘gay books’ or books about gay people in the library at all.” For defending the sex education book for teens, the library director was branded as a pedophile in the highly controversial public debates.

“This Book Is Gay” is at its best in providing useful information for curious gay boys and teens; less so for other groups on the LGBTQ spectrum. Multiple reviewers on Amazon and Goodreads say the same, judging by comments posted by lesbian, bisexual, gender fluid, non binary, and asexual readers. To be fair, Juno herself admits she’s stronger in certain areas than others.

The main thrust of “This Book Is Gay” is helping young folks who suspect or know they’re different feel better about being different, with useful hints on how to find friends who feel the same. In this, the book is similar to several other LGBTQ-themed YA books under attack around the country.

Juno goes a bit further, though, offering specific and practical advice on how to find and meet like-minded people for socializing and sex. Some of her advice is tailored specifically for teenagers in high school. She frankly describes the different ways gay men and women bring their partners to orgasm. She includes illustrations (not of sex acts, but of bodies), less graphic than those in “Fun Home” and “Gender Queer,” graphic novels that feature in other book-banning attempts.

Juno includes chapters on the dangers of promiscuous gay sex, STIs, genital diseases, and AIDS, and includes a thoughtful final chapter with advice for parents of children coming out as gay and/or transgender. The overall tone is friendly, intimate, and upbeat: Juno’s an out and experienced gay person with answers, encouragement, and advice for gay- and bi-curious teenagers, a Dan Savage for the younger set.

On the down side, Juno downplays the very legitimate fears of kids considering coming out. Never mind countries and cultures where being gay or transgender is literally illegal, even punishable by death, gay kids in North America and Europe are still ostracized, sometimes thrown out on the streets by their own parents, shunned by former friends and churches. It happens all the time, even today. Yes, Juno lists countries where being gay will get you killed, advising kids in Nigeria, for example, to stay in the closet for their own good, but in the next chapter and the ones after that, she makes light of these concerns and promises readers that coming out will be one of the most positive and freeing experiences they’ll ever have. From my own observation as an outsider, coming out can be fraught with danger, even for kids in liberal enclaves within tolerant Western societies.

Why this book should remain on high school and public library shelves, accessible without restrictions to teenaged readers:

High school kids already have access to tons of information on gay sex, gay lifestyles, sexual orientation, gender identity and the steps one can take to change it. Not to mention online access to straight, bi, and gay pornography. If my long-ago experience as a teenager in high school is a guide, teens today have already studied that material, and more.

You can’t call anything in “This Book Is Gay” pornographic while keeping a straight face. Juno describes basic sexual acts clinically but never pruriently. You can pretty much read the same sort of thing in any other advice book for gay and transgender youth, not that there’s much of that out there (which is why Juno wrote the book in the first place).

This may be coming at it sideways, but I cheer when Billy Bob Thornton puts on a CPAP mask at night in the TV series Goliath. When I was diagnosed with sleep apnea, it felt like a weird, shameful weakness, something akin to erectile disfunction. And you never saw anyone sleeping with a CPAP on TV. After Goliath I felt less alone, less embarrassed.

You don’t know how important representation is until you’re the isolated minority, finally seeing people like you in books and on the screen. Imagine how empowering and validating those first prime-time TV series featuring Black actors were to Black viewers. Or how important books like “The Absolutely True Diary of a Part-Time Indian” are to Native American kids. Or how meaningful and affirming “This Book Is Gay” will be, and is, to thousands of frightened gay and transgender kids, every one of whom thinks he or she is the only kid in the world with the same feelings. Wouldn’t you rather they read “This Book Is Gay” than log onto Pornhub? (As if we don’t all know they’ll do both and there’s nothing we can do about it anyway.)

I’ll leave you with a link to a recent news story. It’s about a prominent member of the main group urging angry “parents” and armed Proud Boy thugs to disrupt school and library board meetings to protest “This Book Is Gay” and other LGBTQ books: Moms for Liberty Activist Wants LGBTQ Students Separated into Special Classes.

Because that’s what this shit is all about. It’s not the books. It’s never the books. It’s the kids who are different they’re after. How are you going to react when they come after yours?

p.s. If you decide to read the book yourself and go looking for a copy at your library or on Amazon, you may be confused by early editions listing “James Dawson” as the author. Dawson was a gay man at the time of writing and publication. She has since transitioned and new editions bear her new name, Juno Dawson. Since we’re talking about the author, here’s a link to her thoughts on the attacks on “This Book Is Gay”: “I Wrote the Ninth Most Banned Book in America. That Sucks.”

p.p.s. As part of my You Can’t Read That! project, I read and review banned books, including many at the center of protests and challenges. You can see a full index of those reviews on my Goodreads banned book shelf.