Our friend Mary Anne’s son Andrew has opened an occult bookstore here in town. We were invited to the soft opening yesterday and of course went, not only to support Andrew and his family in their new venture, but also out of genuine curiosity. I came home with a copy of The Vampire Encyclopedia, which I’ll consult whenever they play fast and loose with Dracu-lore in Buffy the Vampire Slayer. 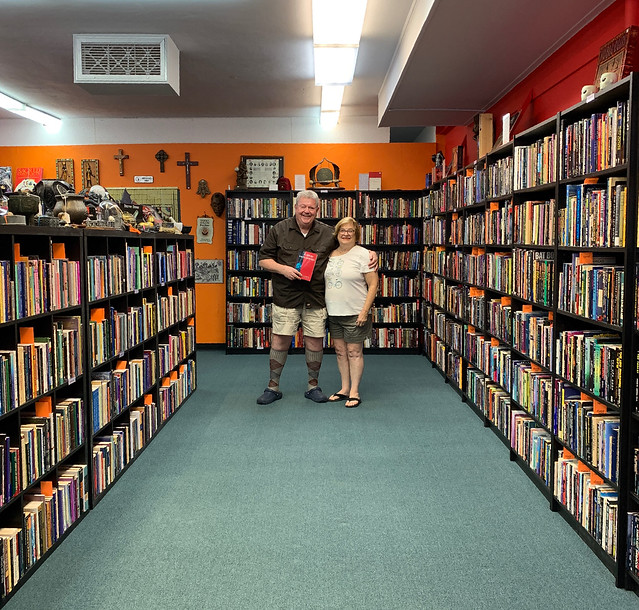 We may visit again, because after we left Donna commented on the shelf of books about the Salem witch trials she’d seen and regretted not buying one. As for me, I’d like to know more about spontaneous human combustion, particularly as it applies to Republicans.

One interesting side note: one of Andrew’s kids told Donna the owners of the strip mall they’re renting store space from was reluctant to have them as tenants, because Satan. Another reason to become a regular patron! I bet I can find all manner of banned books there!

Our daughter Polly, when she was little, called vampires suckerbloods. Which is as good a title for this post as any, I guess.

The HOA meeting I’d been dreading went amazingly well. Everyone was calm and civil, and in the end approved a substantial increase in annual dues, something I thought would never fly. I felt it was on me to deliver the vote, which is as silly and irrational as it is self-centered, but that’s how I felt. So. Mission accomplished, and now we can start putting funds aside to pay for repaving our roads in a few years.

Still gonna quit when this term is up in January, though. I was on the HOA board for three years in the early 2000s, and am now nearing the end of a second three-year stint. Someone else can be responsible for collecting the dues I helped triple!

Until a termite inspector convinced us to cut them down, shrubs covered the back of our garage. I don’t remember what they were, exactly, but they were robust: two feet thick, heavily branched, dense with thorns and leaves. They completely hid one side of the garage, from the foundation to the eaves. A pair of cactus wrens had a nest somewhere in there and would come out to scold us when we invaded their space. Their space, they made clear in no uncertain terms, was anywhere outside the house or garage. They’d follow us around, nattering away and shaking their tail feathers, until we’d go back inside. We called them the landlords. But then we cut down the shrubs and the landlords moved away. 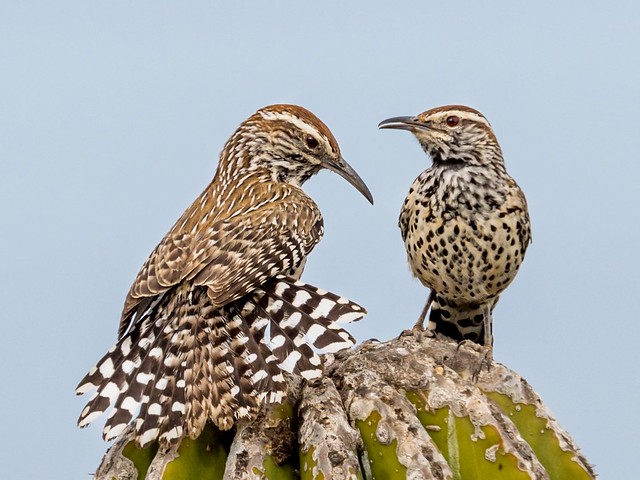 It’s been fifteen years since we’ve heard cactus wrens calling, but it’s a sound you don’t forget and I instantly knew what was yelling at me and the dogs last night when we went out back. It was just after sunset, plenty of light still, and I spotted them right away, a healthy-looking pair perched on the cinder block wall by the pool, taking turns chattering at the dogs. The dogs knew they were there, too, and it was obvious the rival gangs have been contesting territory for some time. In what seemed to be a nightly challenge and response ritual, the birds would taunt the dogs, the dogs would rush the wall, and the birds would taunt some more. They all appeared to be having fun. Somehow I hadn’t noticed we had landlords again until last night. Now I know they’re back I feel complete. And happy.

Donna’s home from visiting her siblings in Michigan. She has three half-sisters and a half-brother there, all born to her mother and step-father (who are both gone now). There are half-sisters in California and Colorado, and a half-brother our son’s age from Donna’s father (also gone). Donna had a full brother, one year younger, but he died last year. What a family … I was going to say I can’t imagine, but my father remarried after my mother died and my four sisters and I suddenly had two step-sisters, so I guess I can.

Living way out here in Arizona I don’t see my siblings much. My next-youngest sister, Sue, who lived in Illinois, died five years ago. One sister lives in Montana and two others, plus the two step-sisters, live in Missouri. I saw them all when Sue died, but haven’t been back since. There’s a family reunion with our Woodford cousins in Nebraska later this year, but we’re not going. Don’t know when I’ll see any of them again. We are, though, driving to Las Vegas at the end of August to see our son and daughter-in-law. This time we’ll bring only one dog and leave the other two with a friend in Tucson. Because last time we brought all three and the two new ones got excited and shat on the floor. Round here, that’s a grounding offense!