We adopted Lulu and Fritzi in July 2021. Although not siblings, they were born around the same time and have always lived together, so they might as well be sisters. All we know of their past is that they first lived with an older man and then were surrendered to (or seized by) animal control. When we met them they were temporarily living with a foster family. The paperwork from animal control said they’d been spayed and given their shots, and that they were around three years old.

Not knowing their birthdates, we decided they’d share birthdays with Mister B, our other dachshund, on the 23rd of August. Until yesterday, we thought they’d turn four later this month, the day Mister B turns fourteen. But then we took them to the vet for wellness checks and a new round of shots, and learned they’re a little older than we thought.

Based on their teeth, the vet says they’re most likely between five and six years old, so now we say they’re about to turn five. We could say six, but why make them older than we have to? Apart from some plaque buildup on their teeth, which’ll require expensive cleaning, they’re both in great health. All three dogs have valley fever, but they’re on medication and it’s under control. 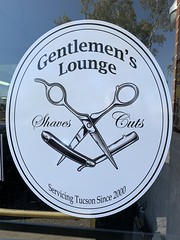 I’m either loyal or resistant to change. You tell me, though: if you find a barber you like, do you set up a standing appointment or keep shopping around? I stick with what I like.

After my barber of many years sold his shop and retired, I started seeing Bernice, the new owner. If I couldn’t stick with him, at least I could keep going to the same place. Apart from the fact that she renamed the shop, a name that suggests pole dances and overpriced drinks, I like her. She’s at least as good as the old owner, maybe a bit better. So she bumped the price of a haircut up by five bucks. I don’t mind. I kept expecting the old owner to do the same thing, so I wasn’t at all surprised when she did. It’s worth it to me to have a set appointment with no waiting and someone I can trust and enjoy talking with.

And you know what? I may not like the new name, but she got the possessive apostrophe right, and there aren’t many business owners in Tucson who could do that.

One thought on “Dog Years”