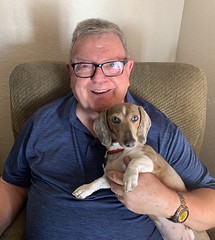 Fritzi’s slow to respond to fluconazole, the valley fever medication we started her on earlier this week. Her appetite is way down. Other than the piece of sliced braunschweiger I wrap her pill in, she either ignores the food in her bowl or nibbles at it reluctantly, leaving half or more uneaten.

I give all three dogs dry kibble, usually with a bit of broth to soften it up. It’s Mr. B’s prescription kibble, but since it’s also nutritious for well dogs, all three have been eating it. Until Fritzi got valley fever, that is. Mr. B continues to gobble it down, but now Lulu’s starting to turn her nose up at it, taking her cue from Fritzi. This morning I stopped at the feed store for a bag of what I hope will be tastier non-prescription dry kibble and a few cans of wet food. Tonight I’ll try giving Fritzi the wet food, and a mixture of dry and wet for the other two (the prescription stuff for Mr. B, the new dry kibble for Lulu).

I’m home with the dogs, by no means lonely. Donna’s at a resort in the foothills on the west side of town for her annual sewing retreat. I expect her home Saturday night. Other than this morning’s dog food run, I’m staying home, eating leftovers, reading, trying not to stream shows we normally watch together. Gosh knows, there are plenty of them she can’t stand, so I’m binging on those. The final season of Stranger Things is an exception, though — we watched the first episode together and she didn’t seem to enjoy it, so I’m pressing on alone (actually I don’t much like the final season either — they’re trying too hard or something). If I’m wrong and Donna wants to catch up when she gets back, well, I’ll just read through the ones I’ve seen.

NBC news story just now: Putin’s superyachts targeted in latest round of U.S. sanctions. Um, what did we target in the early rounds of sanctions, back in March and April? I remember news story after news story about seized yachts, some of them said to belong to Putin. Where those stories bullshit? Aspirational as opposed to factual?

If it turns out we haven’t actually seized anything belonging to Putin, I will not be surprised.

In the Time Marches On department, it appears our grandson Quentin, now finishing his freshman year at Utah Tech in St. George, Utah (duh), has a new friend, with whom he spent a few days in Los Angeles. 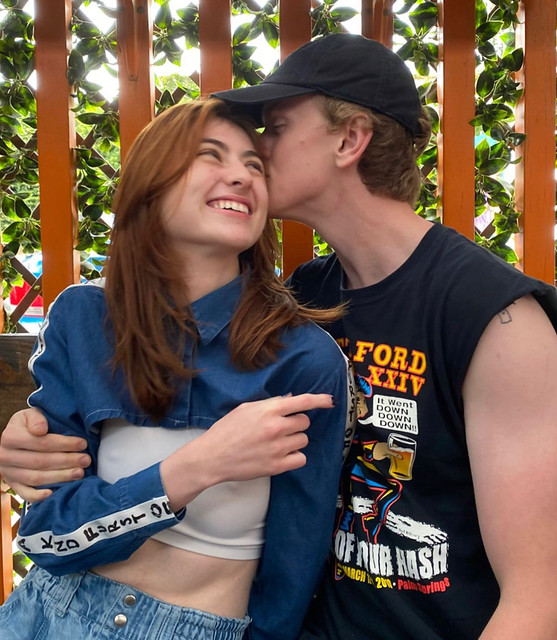 *Yes, that is a Betty Ford Rehab Hash T-shirt (he said, bursting with grandfatherly pride).