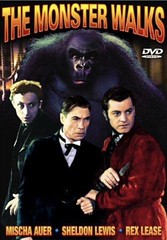 I try not to watch TV during the day, but sometimes on a Sunday afternoon I’ll stream science fiction movies from the 1950s. It’s getting hard to find ones I haven’t seen before, so yesterday I cast the net a little wider and found something called The Monster Walks, an early talkie from 1932.

“People in an old dark house on a stormy night are menaced by a killer ape,” the blurb says. For sure, said ape appears menacing on the poster, but buyer beware: he turns out to be a chimp. The rest of the movie is just as lame. Still, I gutted it out. Why? Not because of Bonzo; I wanted to know more about the actor listed in the credits as Sleep ‘n’ Eat.

The second I saw that name in the credits, I pictured a copycat Stepin Fetchit, a Black actor playing a cringe-inducing, racially-stereotyped bit part. Indeed, that’s exactly the role Sleep ‘n’ Eat played in the movie, but as it streamed I went down a rabbit hole with my iPad, looking up information on Wikipedia and IMDB, and it turns out there’s a bit more to the story. 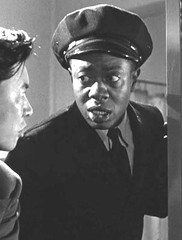 Sleep ‘n’ Eat was the stage name of actor Willie Best, who came to Hollywood as the chauffeur of a visiting white couple from Mississippi. He started acting in movies in 1930 and stayed active into the 1950s, with 133 movie and television credits to his name.

At the beginning of his career, he went by the stage name Sleep ‘n’ Eat, but it didn’t stick. He used it in five or six early movies, but after 1935 was listed under his real name in the credits (when he was listed, that is; as is typical of Black Hollywood actors of that era many of his appearances were uncredited). Whether appearing as Sleep ‘n’ Eat or Willie Best, though, nearly all his roles were the same: the “comical negro” character so familiar from those racist old movies. I will say this, though: Best had some shining moments in The Monster Walks. I could see there was more to him than a copycat Stepin Fetchit. 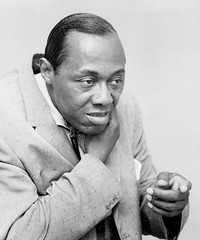 Stepin Fetchit was the stage name of actor Lincoln Perry, already famous by the time Willie Best broke into the movies. Unlike Best, Perry held onto his brand, appearing as Stepin Fetchit in 59 movies between 1925 to 1976. He came to Hollywood from vaudeville, where he’d perfected his Stepin Fetchit character, the “laziest man in the world.” Unlike Best, he went beyond bit parts in white movies, playing straight roles in what at the time were called “race movies”: films with Black casts marketed to Black audiences. He was the first Black actor to get credit in a mainstream (white) Hollywood movie, also the first said to have become a millionaire. Stepin Fetchit is acknowledged as the inspiration for Willie Best’s Sleep ‘n’ Eat character; ironically, when Perry began to get a reputation as a difficult actor, producers began hiring Best to play roles written for Stepin Fetchit.

There’s much, much more to learn about Lincoln Perry, but when I got to the personal life section of his Wikipedia entry and learned he was a wife-beater, I lost interest.

Willie Best liked women, gambling, and dope, but as far as I can learn his vices did not include misogyny and wife-beating, so I kept reading up on him. Though Best, unlike Perry, never managed to break out of the comic relief box, he was said to have been an excellent actor (a glimpse of which is visible in The Monster Walks). He was certainly a prolific and hard-working actor, given all the movie and television work he did over a 22-year span, more than twice as much as Perry. Best’s movie career ended with a drug bust in 1951. He got some television roles after that (reading up on him, I realized he was the Black elevator operator I remember from My Little Margie, one of the first shows I ever watched on TV), but by the 1960s he was broke and living in obscurity at the Motion Picture Country Home in Woodland, California, where he died of cancer in 1962. He was just 48.

Best said of himself, in a 1934 interview, “I often think about these roles I have to play. Most of them are pretty broad. Sometimes I tell the director and he cuts out the real bad parts.” Best continued, “But what’s an actor going to do? Either you do it or get out.”