“It wasn’t a bother at all, the old gent replied, gesturing toward his bed. I was only reading. Ah, I thought, seeing the corner of the book poking out from the folds of his sheets. I should have known. The poor old chap, he suffers from the most dangerous addiction of all.”
— Amor Towles, The Lincoln Highway 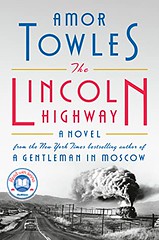 The Lincoln Highway
by Amor Towles

Skimming over reader reviews on Amazon Goodreads, my takeaway is “The Lincoln Highway” either hooks you or it doesn’t. I was hooked from the first page.

As always, it’s hard for me to say much about a novel I love without getting into spoiler territory, but I’ll venture this far: Duchess had me worried from his first to his penultimate appearance. I was convinced he’d murdered the warden in whose trunk he had, with Wooley, escaped; Amor Towles meant for me to think so and played me like a marionette … to which I say Bravo!

Not many Goodreads reviewers mention Duchess’ final scene. One who did says Emmett, not knowing about the wind on the lake, wasn’t at fault. I say no — Emmett, like me, saw Duchess for what he was and did the necessary and only thing.

That I’m still thinking, days later, not only about Emmett and Duchess, but also Wooley and Billy and Sally, tells you how deeply this terrific novel got its hooks in me. “A Gentleman in Moscow,” here I come. 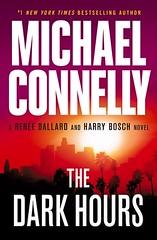 The police work in Connelly’s Bosch (and now, Bosch/Ballard) novels has always felt like the real thing to me, but what do I know? So I hit the Google: Bosch novels appear near the top of basically every online list of “best police procedurals.” That’s not all: on Quora I discovered this, written by a retired police officer in response to a question about the accuracy of police procedural novels in general:

I like the Harry Bosch books, and now the new Rene’e Ballard series, by Michael Connelly. Admittedly I don’t read a lot of police detective novels, because firstly, it didn’t seem like much of an escape from the demands of my own job, and secondly, I would find myself getting irritated at some of the deviations from how it really goes. Once I tried the Connelly books, I have found myself even rereading them. This doesn’t necessarily mean that I find them to be 100% accurate or representative, but many things are close to my own experience. … I was actually surprised to find that the author was a journalist, not a police detective, before he began writing the novels, although he always cites several real detectives as sources and manuscript readers.

“The Dark Hours” in particular impressed me, filled as it is with references to the things that affected us all, not just the fictional Harry Bosch and Renée Ballard, during the first year of the coronavirus pandemic.

At the beginning of the novel, New Year’s Eve 2020, Ballard is masking at the office and on the beat, planning to get vaccinated at the first opportunity. Bosch is living the hermit life at home, unmasked and unvaccinated. When one of Renée’s cases pulls them together, Harry finds himself back on the street, masking in deference to Renée, even dragged to a vaccination site by her once the shot becomes available. Coronavirus is everywhere; some of the active duty officers and detectives Ballard works with take it seriously, some don’t. Also in the background: Black Lives Matter protests, calls to defund the police, a bad case of Blue Flu in response to both; finally, the January 6 insurrection. All of which is enough to set off the Sean Hannity wannabes who delight in making everything political, as you can see in Amazon and Goodreads reviews (just look for the word “woke”).

Well I say fuck that. The topical references make this realistic cop novel even more real. And I’ll add this in response to critics who don’t want to be reminded of real life: “The Dark Hours” is a cop story. The only woke cops I know of are the ones on ABC’s “The Rookie,” where they’re all good guys and girls who love their jobs and serving the public, where the pandemic, Black Lives Matter, defund the police, and January 6th are all pretended away. Maybe that’s more their speed.

So why not five stars? Well, there is this:

Connelly, normally so precise in his language, really let me down with that one!

“Books about food are often filled with insights or advice that makes us feel bad about how we are eating. They tell us that we should follow a plant-based diet or that our TV dinners are irreparably harming the planet. Because these books, informative as they may be, tend to be highly prescriptive, they can inadvertently make us more judgmental. They can encourage us to be increasingly critical of ourselves and others. This is a different kind of book. I hope you will find it short on judgment and long on empathy and evidence about the feeding challenges that unite and divide families across American society.”
— Priya Fielding-Singh, How the Other Half Eats: The Untold Story of Food and Inequality in America 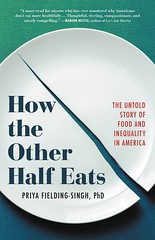 How the Other Half Eats: The Untold Story of Food and Inequality in America
by Priya Fielding-Singh

This was my book club’s selection for March 2022.

I’ll be thinking about this book for a long time. Over the past couple of decades, I’ve become more aware of food inequality in our society, primarily through news reports. “How the Other Half Eats” is a focused and in-depth look at how mothers at different financial and social levels feed their families, and the factors that limit and influence their choices. The author describes without prescribing, and in the case of making kids happy by indulging them with fast and junk food, understanding of the pressures on mothers.

I was most taken by Fielding-Singh’s vivid descriptions of those pressures, particularly upon poor mothers. As they say, it’s expensive to be poor, and moreover every greedy corporation, credit card company, landlord, on-the-take police department, envious neighbor, and scammer is after you 24/7.

I now have a renewed fear of food insecurity. We all live paycheck to paycheck. Now imagine an international conflict, pandemic, or climate disaster that disrupts supplies and creates food shortages everywhere. Food deserts expanding to encompass not just the poor parts of town with their Dollar Stores, but the good side of the tracks as well … bare shelves everywhere. Now imagine being a middle class Ukrainian trapped in a city under Russian bombardment, or a Syrian in Aleppo, or a Palestinian in Gaza, or a Congolese … well, it wouldn’t take much to rip away the foundations of our personal security.

How many of us can even imagine what it would be like to be hungry, our money worthless, no food to be had anywhere. My spider sense of living in a society where only the thinnest and most frayed of safety nets keeps us from falling into total chaos is more than tingling after reading this book.

Jesus, how do these moms do it, day in and day out?

“But books, like people, die. They die in fires or floods or in the mouths of worms or at the whims of tyrants. If they are not safeguarded, they go out of the world. And when a book goes out of the world, the memory dies a second death.”
— Anthony Doerr, Cloud Cuckoo Land 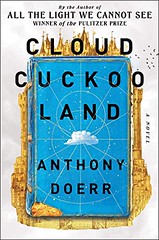 Has anyone else, like me, tried to call up this novel’s Goodreads page by typing “cloud” into Goodreads’ search bar and had “Cloud Atlas” come up first?

With only minor editing, my review of David Mitchell’s brilliant novel , written in 2011, would do very nicely for Anthony Doerr’s brilliant novel, so broadly similar in structure and spirit are the two.

My one objection, this coming from a lifelong science fiction fan, is the “artificial gravity” aboard Argos, Konstance’s interstellar ship. I would think, with that great library at her disposal, she would have quickly apprehended the tallness of the tale in which she found herself. I was happy to observe, though, that she came at the truth in a different way.

“Hygiea was a loosely consolidated, carbonaceous chunk of rock and ice well out in the ass-end of the belt, with a diameter of over four hundred kilometers.”
— Kali Wallace, Dead Space 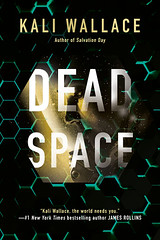 With predatory corporations, social and political scars from a recent war conducted against Mars by Earth, and humans trapped in indentured servitude on asteroids in the Belt, the world Kali Wallace builds in “Dead Space” resembles that of “The Expanse.” That is what attracted me to this book, and I felt well-rewarded after reading it.

The story itself is a “closed-room” murder mystery, the closed room being Hygiea, a hollowed-out asteroid. The suspects, at least in the beginning, are human; the more we learn about the investigator’s past, though, we begin to suspect there’s a rogue artificial intelligence at work, possibly more than one.

It’s a well-written, tense story, but only one character, Hester Marley, is extensively developed.

This will sound reactionary, but it bothers me every time I encounter it: novels that incorporate nonbinary characters whose nonbinarieness contributes nothing to the plot. Here, that character is Ryu, referred to with the singular they. Far as I can see, the only reason Ryu’s in the story is to demonstrate the author’s willingness to call someone by their preferred pronouns. Would that Ryu’s nonspecific gender identity played a role in some important plot twist … I’d love it if it did.

“The sea had killed him, they said. Jenny did not blame the sea. Jenny blamed the King: the man who had taxed salt and windows and wigs to pay for a war in a place where people had decided they’d had enough of taxes, and who had kept on taxing them once the war was over.”
— Meg Keneally, Fled 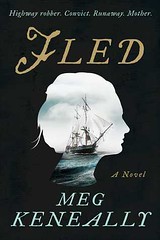 The writing, IMO, is a little wooden, hence 3.5 rather than 4 stars. The story, based on actual people and events, is 5-star fascinating. I’ve read Robert Hughes’ “The Fatal Shore,” a nonfictional account of England’s penal colony in Australia; “Fled” is a fictionalized account of one part of that story, the experiences of one of the first group of 23 woman prisoners transported to Britain’s new penal colony in Australia.

We know little of what the historical Mary Bryant, here called Jenny Gwyn, was like. But we know she survived an audacious and harrowing escape and somehow also survived harsh British justice of the day, and Meg Keneally herself says so. But it feels as if she’s gotten it right.

By the way, I returned to Robert Hughes’ “The Fatal Shore” after reading “Fled.”