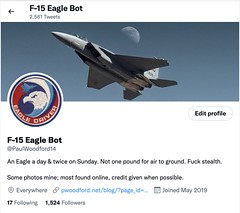 Twitter tells me I started the F-15 Eagle Bot account three years ago today. Mission statement: “An Eagle a day & twice on Sunday. Not one pound for air to ground. Fuck stealth.”

Rousing words, no? It helps if you understand I flew F-15 Eagles for the USAF, a fact I’ve probably never mentioned here before. In three years I missed posting a daily photo just once, and that was on Friday (so upset was I over a jammed garage door). Would you believe not one of my 1,500-plus followers called me on it?

My other Twitter accounts are virtually unknown. The personal account, PaulWoodford, has but 394 followers, and it’s been around nearly 14 years. Poor Donkey Hote, my grammar policeman alter ego, has managed to garner all of 38 fans in the 8 years it’s been on Twitter. No blue checks for me, I guess.

Let me tell you about that jammed garage door. 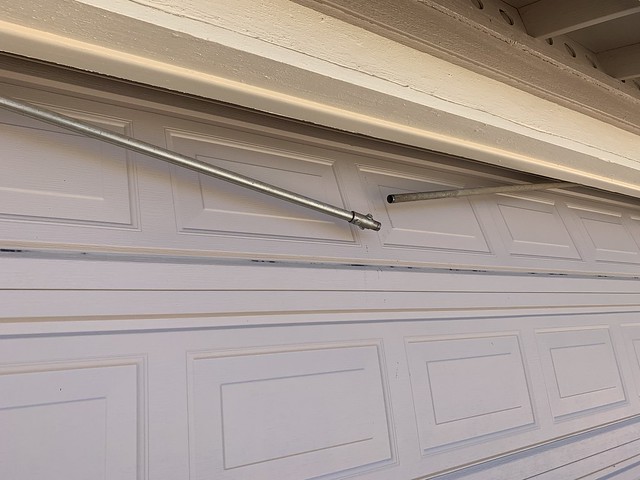 When I pressed the remote Friday morning there was a horrible clunk and the garage door stopped partway up. A rod came apart in the middle and the hanging ends wedged in the gap between door segments. I was able to pull the door down a few inches, but otherwise couldn’t move it.

I called the first garage door service company on our HOA referral list. They couldn’t send anyone until Wednesday. I sucked it up and booked the appointment. Meanwhile, I’d be needing my truck, which of course was in the garage. Our daughter Polly came by in the afternoon and the two of us were able to push the rods out of the way and manually raise the door. Once the truck was out of the garage I tried lowering the door, but the rollers came off the track on one side and it stuck halfway down. By now it was getting close to 5 PM. I started calling the remaining numbers on the HOA referral list and on the the very last one got lucky. Discount Garage Door said Kevin would be here in the morning.

Kevin came at the stoke of 8 AM Saturday and had the door fixed an hour later, complete with a new rod (which he told me is actually called a shaft). All is well with the world and I’m breathing easy again.

Or almost. After waking with a sore throat on Tuesday, Wednesday, and Thursday, Donna took a home Covid test. She tested negative and I shared the good news on Facebook. Friends were quick to weigh in, warning that a single negative test means nothing. To which I have to ask, do airline and cruise ship companies know this?

But anyway. The friends whose comments we took seriously were those who’ve actually had Covid. One said he tested negative one day and positive the next. Another told how she felt sick and self-tested four days in a row, only coming up positive on the last test. Okay, we’re convinced. Donna’s going to test again, even though her sore throat is gone and she’s feeling fine. She has a sewing retreat later this week and will take another test today. If she’s positive she’ll bail and stay home. Meanwhile our niece Rebecca arrives today for a short visit, too late to cancel.

I filled out the online form and ordered the two additional sets of home test kits the government gives away, because it’s starting to look like we’ll need ’em. If Donna does come up positive, Rebecca and I will start self-testing too.

Which brings us to the dogs. Fritzi, our third dachshund, has been officially diagnosed with valley fever and is taking two 50mg tablets of fluconazole every day, just like her BFF Lulu, who’s had it since she and Fritzi came to live with us last year. Mister B, thankfully, has almost kicked his valley fever and is down to one 50mg tablet every other day. Fritzi, who’s been on meds three days now, is starting to show improvement. Her appetite is beginning to come back, at any rate. Dogs and pills, though? The solution we’ve come up with is to wrap a bit of braunschweiger around the pill. They wolf it down so fast they don’t notice the pill inside. Except when they do, which is when you resort to peanut butter.

I thought we could all use a break from the news today, so no hot takes. Hope you don’t mind!