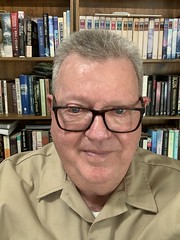 Paul G., my barber of ten years, sold his shop and retired. I’m now seeing Bernice, the lady who bought him out. My first visit was this morning.

Bernice left the hair on top a little longer than I’m used to, but since Donna approves the new look I’ll give it a go. I get a haircut every five weeks; we’ll see what it looks like then and go from there. I can always ask her to cut it shorter next time.

I’m happy to report that during my visit to the cardiologist yesterday, the atrial fibrillation was absent and the EKG showed a normal heartbeat. I was afraid my heart was pumping erratically 24/7 and was losing sleep and worrying myself sick over it. Of course I realize that just because I was fine yesterday doesn’t mean the condition has gone away, and there’s a course of tests and monitoring ahead of me. For now, a new med: flecainide acetate, which I’ll take daily. Next month, a cardio stress test, followed by an ultrasound. I’ll then wear a portable monitoring device for 30 days. With the results from that, the cardiologist will undertake a course of treatment. So that’s what’s going on with the ticker … more to come as things develop. For now, I’m feeling great, a lot less stressed than I’ve felt over the past few weeks. 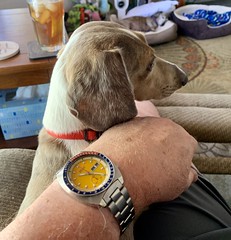 The refurbished Seiko is running great and keeping good time, although I make an effort to switch it out with the other watches in my arsenal.

Fritzi, here sitting under the warmth of the sun-like Seiko, is running less well, with a cough and diminished appetite. We’re taking her to the vet for a valley fever test this afternoon. If, as I suspect, she has it, that’ll be all three dogs (although Mister B, fingers crossed, has nearly kicked it). For now we’re feeding rice and chicken to Fritzi. Lulu and Mr. B get kibble moistened with chicken or beef broth, but I slip them some of Fritz’s special diet so they don’t feel discriminated against.

Donna celebrated her birthday yesterday with dinner at a local Italian restaurant we used to visit in the BC (before Covid) era. Donna ordered pescatore, a cioppino served over angel hair pasta, and I had shrimp and scallops in a mushroomey cream sauce served over linguini. We barely made a dent in our food (which was every bit as good as we remembered it), but we brought home boxed leftovers and will try to finish our fancy dinner tonight. Donna, by the way, is once again the Older Woman, but I’ll catch up with her in October.

The library emailed to tell me an ebook I’d placed on hold, “Into Every Generation a Slayer is Born: How Buffy Staked Our Hearts” by Evan Ross Katz, was ready to download, but for some reason the online checkout process went into a loop. I decided to look at the Amazon reviews while the little iMac circle chased its tail round and round. They were terrible! Or at least the no- and one-star reviews were front-loaded, all on the first page. I almost canceled out, but then it occurred to me the haters must be the kind of Buffy stans who don’t want to hear the dark stuff; i.e., the gossip about Joss Whedon. I, on the other hand … a mature and sophisticated Buffy stan … want to read a warts-and-all adult appreciation of the best show ever to appear on the small screen. By the time I clicked back to the library checkout page, the downloading issue had resolved and the book’s now on my Kindle, ready for a leisurely yet obsessive read. Happy happy!

I’m convinced the media is deliberately trying to paint Joe Biden as erratic, gaffe-prone, and potentially senile. The latest push in this direction is its hysterical oh-no-he-said-WHAT? reaction to his Tokyo comments about responding militarily to an invasion of Taiwan by China.

Biden, asked at a press conference in Tokyo if the U.S. would intervene military to defend Taiwan, said, “that’s the commitment we made.” Speaking alongside Prime Minister Fumio Kishida, he added that the U.S. maintains a “one China policy,” recognizing Beijing as the government of China, but said that the idea that Taiwan can be “just taken by force … is just not appropriate.”

Goddamn right. In the context of Russia’s invasion of Ukraine, this is exactly the message the American president should be sending China, and I’m sure that country’s leadership, if not our media, is taking his remarks seriously. I guess it’s fine for the American media to pretend Biden’s lost it … free press yada yada … but at least with Biden they have to go out of their way to make the case. With Trump, all they had to do was transcribe his actual words and actions to show the world what an idiot he was and is, no embellishment required.