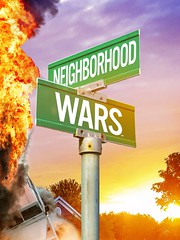 I’m up to my eyeballs in HOA drama. Personal animosities between two residents threaten to derail a rational discussion of compliance with rules every homeowner agreed to before purchasing here. I probably should have stepped in sooner. I hope it’s not too late now.

It’s an ugly business, being president of an HOA, but hey, I volunteered for the job. Happily, this is my third year and I can turn the job over to someone else in January.

Apologies for the vagueblogging. I hate it, and hate it even more when I’m the one doing it. But I’ve learned that anything I say online is out there where anyone can find it. By way of example, several years ago I wrote about investigating an F-15 crash in Alaska. Within 24 hours a relative of one of the men who died in the crash had tracked me down, demanding details I was forbidden to disclose. Another time, after I wrote about the death of a Dutch friend some of my squadron-mates and I once suspected of sharing info with the Warsaw Pact, the man’s nephew — along with the Royal Netherlands Army officer who’d investigated the spying allegations — emailed to share their thoughts on my post (long story short: they wished I’d let sleeping dogs lie).

So coming back to the HOA, I was deliberately vague back in January 2021 when I wrote about our experience with a neighbor. This is what I wrote then:

Well, said guy is dead now and his widow no longer lives here, so I’ll share a few more details. 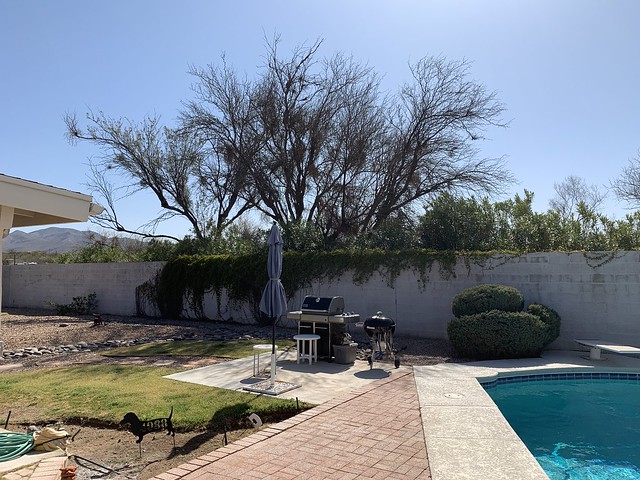 In the winter of 2020 we decided to do something about a pair of dead mesquite trees on the back side of our lot. We wanted them taken down before they fell on their own and knocked down our cinderblock fence, but thought the price a professional tree service quoted us was too high. I asked around and a couple of neighbors said we should get in touch with another neighbor, Ed, who lived one street over. Ed heated his house with firewood, they said, and would probably agree to cut our trees down and remove them just for the wood.

Before I could ask Ed, he showed up at our door and volunteered to do just that: cut down and remove our dead trees for the wood, no payment needed. We said we’d pay him something anyway and gave him the go-ahead. He parked a flatbed trailer alongside our fence and got to work clearing a path through the bush to the trees out back.

Clearing the path and a working area around the trees took Ed a couple of days, during which time we realized he was always drinking. He’d show up at dawn with a 24-pack in his cooler and crack one first thing. He’d work with a beer in one hand and an axe in the other. As soon as he finished one beer he’d open another. The bed of his pickup was filled with empties.

Like I said, I wanted to look the other way, but his drinking was impossible to ignore. It was around this time, three days into the job, that Ed started inviting himself into our house, beer in hand, to take breaks on our family room sofa. He also started flirting with Donna. Ed normally knocked off and was gone by five, but one evening, when we were sitting down to dinner and a movie with our friend Mary Anne, he walked in on us again. He started flirting with Mary Anne, who shut him down quickly, and he left. But half an hour later, Donna put some food in a Tupperware container and dropped it off at his house. Half an hour after that Ed showed up at our place again and aggressively tried to hug and kiss Donna and Mary Anne for bringing him dinner. We sent him packing.

The next morning, when Ed drove up, I took him aside and told him to stop hitting on Donna and our friend. He was hung over and subdued, but seemed chastened. I don’t remember what sidetracked me, but I left him alone out back for a couple of hours. When I remembered to check on him again, he was gone. So was his truck. So was his trailer. And the trees were still standing.

No Ed the next day or the day after that. Then his wife called. She opened with “I don’t know if you’ve heard what’s up with Ed and me, but. …”

She and Ed had been fighting for months about his drinking — not just the daily 24-packs, but hard liquor in the evenings, which he was mixing with the Adderall he took for ADHD. Things came to a head one night when Ed threatened his wife, his visiting adult son, and his grandchild with violence if they wouldn’t get off his case about drinking. She filed for divorce the next day and got a restraining order to keep Ed away from her, the house, and the neighborhood. This had all gone down a week or two before Ed showed up at our door and offered to cut down our trees.

That’s when we learned that Ed was homeless when he was working at our place. Apparently he’d been living and sleeping in his truck. But he’d also been violating the restraining order, going in and out of the house while his wife was at work (which is why he got the dinner Donna left there for him the night before he vanished).

When Ed’s wife called us, she didn’t know where he was, but she could tell he wasn’t sneaking into the house any more. Two weeks later a friend in San Antonio called her to say that Ed was working in a transmission shop there, apparently still living out of his truck. A few weeks after that, the police called: Ed had been found dead, in his truck, apparently of a heart attack. We’re not sure, but we think he was still in his late 50s.

Rather than quit drinking, or even so much as cut back, he turned his back on his wife and marriage, his family, his home, his life. That’s how deep it had its hooks in him. 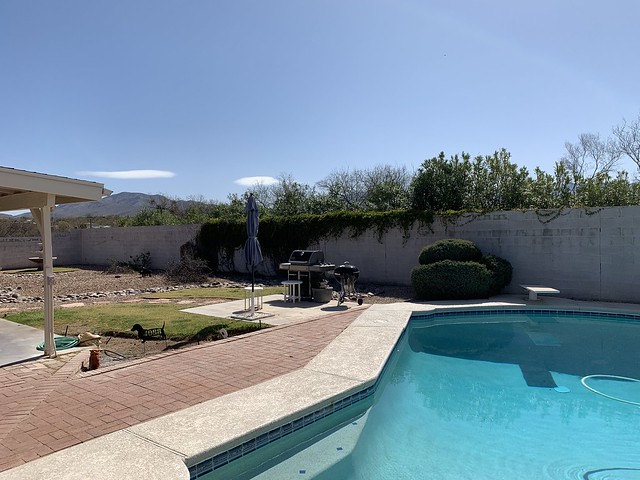 We eventually sucked it up and hired a professional to cut our trees down. Ed’s wife sold the house and moved away. A new couple have moved in are starting to renovate it, but that’s another HOA story. Let the healing begin.

2 thoughts on “An Ugly Business”