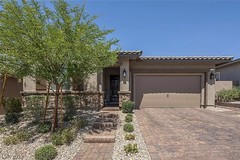 Not to jinx the deal by writing about it prematurely, but our son Gregory is in the process of selling the Las Vegas house he and his family have lived in for twenty-some years and buying a newer, nicer house on the outskirts of town. A house in a gated community for residents aged 55 and older. Which he is, but damn, does that old devil Time ever take a break?

Donna and I are 75. More than half the residents of our little Tucson subdivision are 55 and older, but there are young families mixed in. Not so many that we trip over tricycles when we walk the dogs, but enough to keep where we live from feeling like a retirement community. We like having kids in the neighborhood. We enjoy watching them walk by our house on their way to and from the school bus stop on the corner.

Well. Gregory and our daughter-in-law Beth (who, bless her, is not nearly as old as our geezer son) aren’t anti-child, any more than we are. They want to swap their current two-story house for a single-level ranch. The fact that the house they’re trying to close on is in a gated adult community is incidental. Even so, the news leaves us feeling adrift.

And then there’s water. Putting on my Debbie Downer hat, I don’t know how much longer Las Vegas is going to remain livable. I have the same fear about Phoenix and Tucson, but Las Vegas will be Crisis Central as the Colorado River, Lake Powell, and Lake Mead dry up. What happens when the water’s gone? Maybe I’ve read too many Paolo Bacigalupi novels, but then again maybe if more of us did we’d be doing something about it.

I was diagnosed with atrial fibrillation a month ago. I hoped the meds my doctor put me on would suffice, but while they help prevent complications like blood clotting, they don’t treat the arrhythmia itself. The realization that my symptoms aren’t imaginary, that the occasional thumps in my chest and the shortness of breath that overtakes me when I walk the dogs are real, is forcing my hand. Donna and our nurse friend Mary Anne have been on my case about seeing a cardiologist. Very well. I made an appointment. I may have to adjust to and live with this new reality, but if it’s treatable I’d be crazy not to. I like to think I’m not crazy. Not that crazy, anyway.

We buy most of our food at the Davis-Monthan AFB commissary. One of the main reasons military retirees gravitate to communities near military bases is access to commissaries, which are supposed to save active duty and retired members money on food. In fact there’s a DoD regulation, and it requires commissaries to save shoppers 23.7% compared to off-base stores in the area of the military installations they serve.

Per this article, that level of savings hasn’t been achieved for some time, and it’s due to a number of factors, including supply chain disruptions, the Covid pandemic, inflation, and bureaucratic red tape.

Our commissary’s always out of something, often lots of things, and we wind up at Costco more and more often. I suspect the Department of Defense would love to get out of the commissary business, at least Stateside (they’ll always be essential at overseas installations), but commissary savings are part of the military compensation package. Cutting back on commissaries is cutting pay. Not only is it a cut, it’s a breach of promise. And it’s happening, at least to military members and retirees here at home, not in big sudden jumps but by degrees and inches, getting steadily worse.

Here’s my personal takeaway from the protests outside Kavanaugh’s house.

Which I guess tells you everything you need to know on where I stand with regard to abortion and a woman’s right to choose.

One thought on “Wednesday Worries”