Apropos of nothing, here’s the Gang of Three helping me grill ribs last week. 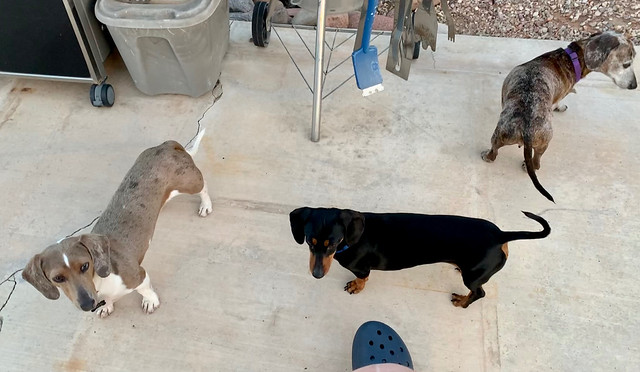 Donna’s nose is wrapped in gauze and tape after having a skin cancer removed at the dermatologist’s office yesterday. She’s not feeling pretty, so no photo. I was in last week for a checkover: while free of skin cancers this time, I had to endure the freezing of several suspicious spots on my face and scalp, which are now starting to scab over. I’m not feeling pretty either.

Every morning I sweep the headlines on Google News. Google, being Google, knows everything we do online: what we’ve shopped for on Amazon and eBay, what we’ve said on Facebook and Twitter, what we post on our blogs. Sandwiched between the Top Headlines and U.S. News sections, there’s one labeled “For You.” In the case of news consumer Paul Woodford, it contains minor news reports Google thinks will catch his eye: anything F-15 related, stories about motorcycles, new books, even news about book banning (which he often clicks on and uses in his banned book blog posts).

I could go on a rant about the Google-driven surveillance state, but there’s as much good in it as there is evil, at least in my case. On the downside, though, Google does funnel a lot of clickbait my way. Stuff like this:

Here’s a quote from the article, in all its English-as-a-Second-Language glory (you can just hear a YouTube narrator with a gratingly phony accent reading this at pharmaceutical side effect fine print speed):

Allow me to start this article by saying: there has been no authority proclamation proposing that a Season 7 of The Expanse will occur. Truth be told, all official articulations have expressed that Season 6 will be the last, without any sprinkle of a potential continuation series to wrap up adjusting the book series all things considered. Be that as it may, this show has pulled off supernatural occurrences previously, and has demonstrated to have an extremely faithful fanbase.

In other words: Gotcha, there is no Season 7. I knew that before I clicked, and clicked anyway. Google knows me so well. Oh, I get a lot of Buffy stuff too. At least I still have most of my mental faculties … I dread the onset of senility, when Google News will have me by the throat.

I’m reading The Dark Hours, Michael Connelly’s latest Harry Bosch/Renée Ballard cop novel, set in the first year of the coronavirus pandemic. At the beginning of the story, Bosch (involuntarily retired two or three books back) is working from home, unmasked and unvaccinated. Ballard masks at the office and on the beat, and plans to get vaccinated at the first opportunity. When they start working together, Harry masks up in deference to Renée, and when the vaccine becomes available, she drags him to a vaccination site. Some of the active duty cops and detectives Ballard works with take the pandemic seriously, some don’t. Also in the background: Black Lives Matter protests, calls to defund the police, and the January 6 insurrection. All of it is incidental to two cases Ballard and Bosch are working, but it’s enough to set off the Sean Hannity wannabes who delight in making everything political. Here are a few quotes from reviews posted to Goodreads:

I’m already hating this one. Mask on, mask off, elbow bumping. antibodies, and vax.

Michael Connelly has lost his way. I think his success with the Bosch TV show has gone straight to his liberal mind.

I don’t know what happened to this author. I guess he got woke. Too much talk about masks, bumping elbows, vaccines, etc. Sorry but I am sick of that stuff in real life.

The progressive, pro Democrat messages are unwelcome interruptions in the novel.

Unfortunately, this is another author who has made the decision to insert the woke politics of today and certain views on masks, the vaccine, defund the police and BLM into the story.

In reaction to those reviews, another reader posted this:

To quote Ken Herman of the Austin American-Statesman, “Those who go out of their way to be offended never waste the trip.” This was a quality police procedural novel and didn’t seem to me to be grinding any political ax. If a reader is so polarized in his/her political thinking that the content related to the pandemic and the public attitudes toward police is a distraction from a good story, then he/she is going to have to be extremely selective in choosing pleasure reading material.

To which I say hip-fucking-hooray. And I’ll add this: masks and other topical references aside, The Dark Hours is a cop story. Isn’t that the opposite of woke? Connelly’s stories are gritty and real, this one made even more real by the inclusion of actual and ongoing events, the “dark hours” we’ve all been living through these past two years.

By contrast, Donna and I have been streaming ABC’s The Rookie on Hulu. Now that’s some woke shit, as unreal as it gets, but it’s fun. And though it’s set in the current timeline, there’s never a hint of the pandemic, Black Lives Matter, defund the police, or January 6th. It’s all pretended away.

May I suggest to Connelly’s critics they watch The Rookie instead of trying to lip-read grown-up books?