You Can’t Read That! Banned Book Review: So You’ve Been Publicly Shamed 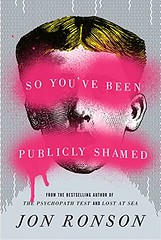 So You’ve Been Publicly Shamed
by Jon Ronson

My interest in this book stems from a November 2021 news article about an Arizona high school principal who was suspended, then fired, over it. “So You’ve Been Publicly Shamed” was on a list of reading assignments students in his school’s senior AP English class could choose from; a parent complained that the book included detailed descriptions of a porn shoot and an act of bestiality. The book was also on the shelves of a public high school library in Texas where similar challenges emerged, with parents complaining that it touched on sensitive subjects like rape and suicide. Since I’m interested in, and write about, book banning and censorship, I decided to read and review Jon Ronson’s book.

To me, the most telling passage in the book is a conversation between the author and Michael, CEO of an online reputation management company:

“Very early on, within two weeks of launching our website in 2006 … I remember being by myself and getting a couple of sign-ups from guys. So I googled them. They were pedophiles.”

“Do you remember the pedophiles’ names?” I asked Michael.

“Of course not, Michael said. “Why do you ask that shit?”

“No, it’s prurient curiosity of the type you condemn in your book,” Michael said.

Exactly. Prurient curiosity of the type that will attract readers to this book. Including me. We just can’t get enough of the piggy-dirties, and we love to shame others for indulging in them, even when we’re just as guilty ourselves. I don’t mean to say there’s anything particularly nasty about Ronson’s book, not exactly, but I feel nasty for reading and enjoying it. What I feel most nasty about, though, is having watched the Justine Sacco shaming unfold on Twitter in real time back in 2013 and not trying to stop it, as if I could have … but I should have at least joined the dozen or so decent people on Twitter who tried to reason with the bloodthirsty mob.

In the end, does Ronson have anything helpful to offer the publicly shamed? Maybe a few will take heart from one of Ronson’s subjects, who, Trump-like, was simply incapable of feeling shame and survived the experience with minimal damage. Then again, that particular person was rich and didn’t have to worry about getting fired. That isn’t the case with most victims of public shaming, whose careers and marriages are ruined.

I wish Ronson had interviewed Monica Lewinsky, survivor of a pre-internet public shaming of epic proportions, today an inspiration and advocate for the bullied and shamed, a truly admirable person. I think Ronson only touched on the subject of public shaming, and that he could have done much more.

And there never is, when it comes to parents challenging books in schools. There’s an entire subspecies of book banners who count and write down every “fuck,” “shit,” and “god damn” in suspect books and wave the lists about at school board meetings, totally out of context. Remember “The Catcher in the Rye”? There’s exactly one “fuck” in the entire book (and zero fucking, mind you), and that was enough to create a coast-to-coast book banning frenzy back in the 1950s. Same old, same old.