Names are traditionally painted below the canopies of U.S. Air Force fighters: pilot/aircrew on the left side, crew chief on the right.

Friends ask me about this often, wanting to know whether I always flew my own aircraft, the one with my name on it. I have to honestly answer that over the course of my flying career, my name was painted on only one jet, an F-15C assigned to the 44th Fighter Squadron “Vampires” at Kadena Air Base in Japan.

I was too junior to have my name on an F-15 when I flew with the 32nd Tactical Fighter Squadron at Soesterberg AB in the Netherlands. In Alaska, when I flew F-15s for the 43rd TFS at Elemendorf AFB, we didn’t paint pilots’ names on aircraft (that happened later, but not when I was there). It was only at Kadena that I was senior enough to have my name on one, and then only from 1990 to 1991. The jet was an F-15C, serial number 78-0484. Here’s what was stenciled below the left canopy rail: “Lt Col Paul ‘Skid’ Woodford.”

(Skid was/is my well-earned nickname. I don’t remember 484’s assigned crew chief’s name, which would have been stenciled on the right side, but I do remember buying him a fifth of Johnny Walker Black from the Class VI store.)

Here’s a photo of 484, wearing dark blue Vampire stripes and Kadena’s ZZ letter code on its vertical stabs, during a deployment to Osan AB, South Korea. Sadly, that’s not me in the driver’s seat, and anyway the photo was taken in 1989, when someone else’s name was on the side.

Typically, there are twice as many pilots in a fighter squadron as there are assigned aircraft. The honor of having your name on one goes by seniority and position. If you’re one of the lucky few and your jet’s on the daily flying schedule, squadron ops will try to pair you with it for that day’s missions — but it’s not a regular thing. Most often, you’ll fly a jet with someone else’s name on it. It was always a special treat when the schedule worked out and I got to fly 484, which probably happened only a dozen times while I was at Kadena. 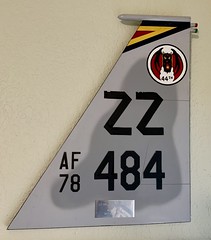 In typical Skid fashion I never managed to take a photo of my name on 484, so you’ll have to take my word for all this. What I do have is this going-away plaque from the Vampires. You might notice the colors at the top aren’t the same as in the older photo above. In my last year at Kadena, the triangular blue/yellow/red design replaced the solid color stripe at the top of the tail (the colors represent the three F-15 squadrons then based at Kadena: blue for the 44th, yellow for the 12th, red for the 67th). Unit tail colors and designs change all the time — what doesn’t change is the two-letter base code.

But that’s all by way of answering frequently-asked questions. Here’s what I really wanted to share with you today:

Until this weekend, when I did a Google search on 484 to find out whether it’s still flying, I never realized 484 was the same jet that was involved in a horrific 1993 ground accident at Kadena, a year and a half after I left.

In September 1993, a helicopter taxiing by the F-15 flow-through shelters at Kadena clipped a floodlight stanchion. Pieces of flying rotor blade killed a crew chief working on an F-15, injured other airmen working on the ramp, and almost killed the helicopter’s crew. The helicopter was destroyed. My old jet, parked nearby when the shrapnel started flying, was penetrated in several places and suffered major damage. It wound up being grounded for three years. During two of those years it was cannibalized to keep other F-15s flying; when the parts needed to repair it were finally scrounged from here and there, it took another year to fix it. By the time my old jet returned to flying status it had a well-earned nickname of its own: Patches.

After its days at Kadena, Patches was assigned to the 433rd Weapons Squadron at Nellis AFB, Nevada, where it was used to train F-15 pilots attending Fighter Weapons School. Here’s Patches on takeoff at Nellis (tail code WA) in 2008. It was flying at Nellis as recently as 2017.

So far I’ve been unable to trace where 78-0484 went after that; as one of the oldest C models it may be sitting in the Boneyard, just a few miles from my home in Tucson, Arizona. That’s a sad but necessary ending for any military aircraft, but a far better one than being lost in combat or an accident. Here’s to you, Patches, my old friend!