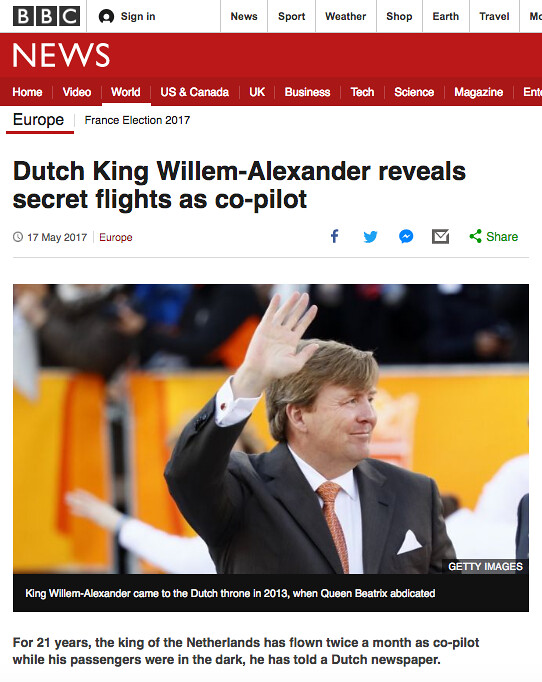 In 1979, when I was stationed at Soesterberg Air Base in the Netherlands, Prince Claus and two of his boys came to visit. I was on air defense alert that day with Jim Kellogg. We were pretty sure the Dutch would arrange a scramble for the royal family. Sure enough, the klaxon went off and five minutes later Jim and I were taking off in full afterburner.

An hour later we came back to land. By then I’d forgotten all about the royal visit. I’d also forgotten a NOTAM I’d read that morning, alerting pilots that the last taxiway was closed. As I rolled toward that taxiway, still at a good clip but thinking there was plenty of runway remaining, I suddenly remembered we had to turn off early. The next-to-last taxiway was just ahead, so I stomped on the brakes. I stomped too hard and the tires blew. My jet bumped to a stop as the Dutch tower controller came up on frequency to tell the world Alpha Kilo Zero-Two had fouled the duty.

The prince and the kids were still on base, riding with my commander, Colonel Al Pruden, in his staff car. Less than a minute after I raised the canopy and shut down the engines, they rolled up to the scene of the crime. I was still strapped in the cockpit as Colonel Pruden, Prince Claus, and two tow-headed boys emerged from the staff car to survey the damage. After a leisurely walk around my jet, my boss looked up at me and said “How do you like your new callsign, Skid?” Or possibly “Way to go, Skid.” I can’t remember the exact words, but I do remember it was the first time I heard the tactical call sign I’d use for the rest of my flying career.

But back to Prince Claus and the kids. At the time of my command performance, Queen Juliana was still the Dutch monarch. She stepped down in 1980 and her daughter Beatrix, the wife of Prince Claus, became queen. Queen Beatrix stepped down in 2013 and Willem-Alexander, one of the tow-headed boys who so solemnly surveyed the carnage of my sudden stop on the runway, became king.

I’ve told the story of Prince Claus and my blown tires before, but had forgotten about the boys. This morning, when I read a news article about Willem-Alexander’s flying career, the memory came back. I can see those boys now, alternately looking at my shredded, smoking tires, then up at me, high above them in the cockpit. I hope I played some role in sparking Willem-Alexander’s interest in aviation. You never know who’s watching, do you?

2 thoughts on “Air-Minded: Influencing the Future”