I’m following news reports of the “landing incident” aboard the USS Carl Vinson in January, wherein a Navy F-35C pilot misjudged his carrier landing approach in the last seconds, struck the ramp, and ejected as his aircraft slid off the deck, splashed into the South China Sea, and sank. 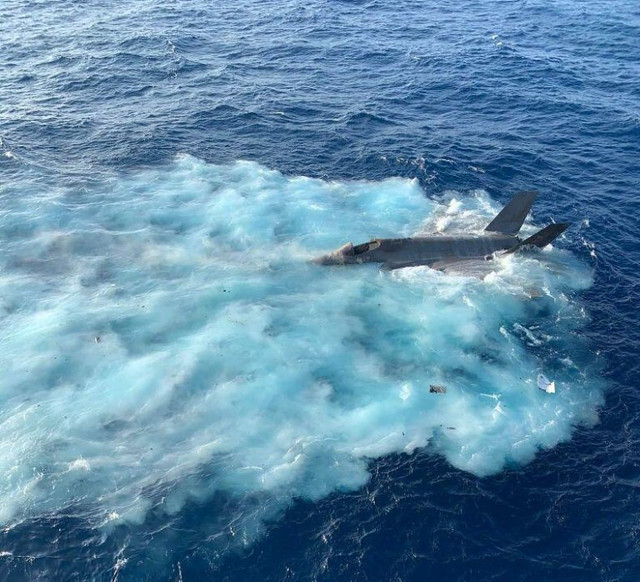 Obviously, we want to get the aircraft before anyone else does, in order to keep stealth technology and materials out of the hands of potential enemies, notably China. But I have to admit my first thought was “good luck with that,” given the depth of the South China Sea, over 18,000 feet in some places.

What made me think it was going to be a difficult salvage operation was my recollection of the CIA’s attempt to recover the Soviet nuclear missile submarine K-129 in 1975, which was resting in pieces under the Pacific Ocean at a depth of 16,500 feet. The secretive operation, which tested deep sea salvage technology to the limits, was only partially successful — we didn’t manage to get the section we were interested in, the one containing the SLBMs. But that was a long time ago. We’ve since gotten better at these things.

The lost F-35 is believed to be only 13,000 feet below the surface, and the Navy’s deep salvage technology has vastly improved in the past 47 years. In fact the Navy recently recovered a downed MH-60S helicopter from a depth of 19,075 feet off the coast of Okinawa, so fishing up the Carl Vinson’s F-35 (which judging by the leaked photo is in one piece) should be a snap. If the Navy can find it.

Over the course of my Air Force career, during which I served on three F-15 mishap investigation boards and supervised another 12 while chief of flight safety for U.S. Pacific Air Forces, not one investigation involved recovering an aircraft from the bottom of an ocean. But I do have a bit of peripheral experience with one such operation.

In March 1985 my boss, the wing commander at Elmendorf AFB, Alaska, flew his F-15 into the Yellow Sea near Kunsan AB, South Korea. His wingman, one of my Elmendorf squadron mates, saw the splash out of the corner of his eye and marked the location with his inertial navigation system. The colonel’s body was quickly recovered, but the aircraft was lost — temporarily, that is.

Two weeks later the Navy narrowed down the aircraft’s location with sonar and sent a submersible down to survey the wreckage field. Another friend and squadron mate, having been appointed to the mishap investigation board, was able to go down in the submersible with the Navy crew. The jet had hit the water hard at over 400 mph and when the wreckage was found on the seafloor it was in pieces, scattered over a wide area. My friend later told me how he and the submersible operator discovered and filmed the major sections, including the two engines. It was only when they discovered a third engine that they realized they’d found the same one three times.

In the end the mishap board was content to leave most of the wreckage on the bottom of the Yellow Sea. I think all they really wanted to recover was the classified comm and jamming equipment. As for needing wreckage to reconstruct the accident, it was clear the colonel had unintentionally flown into the water in a perfectly good jet — the two Eagle pilots had been maneuvering at low altitude, just a thousand feet above the water on a hazy morning with no distinct horizon line between sky and sea — so there was no compelling reason to examine the wreckage and it would have cost millions to retrieve it, even though it was only under 500 feet of water. Recovering the Navy’s F-35 from 13,000 feet is going to cost a bit more.

As of this entry, I’ve written 236 Air-Minded posts for Paul’s Thing. Topics range from my experiences flying fighter and training aircraft for the USAF to comment and speculation on aircraft accidents and current developments in aviation, plus descriptions and histories of contemporary and historical aircraft and photoblogs of visits to air museum. Click here for the complete index of Paul’s Thing Air-Minded entries.