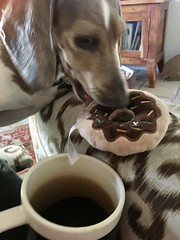 Marlene and Mike, our recent house guests, bought toys for the dogs. Fritzi’s favorite is this donut, and apparently she knows exactly what you’re supposed to do with one. Donna wasn’t quick enough to get a photo of her dunking it in her cup of coffee, but that’s literally what Fritzi did with it just now.

Fritzi may have learned about donuts and coffee on TV. I’m not kidding. She watches, often intently, and goes ape when dogs appear, setting off Lulu and Mister B, who have no idea what they’re barking at because the TV doesn’t register with them. Honest to god, I’m blown away by the different personalities of our three dachshunds, their different behaviors, the different ways they think. I almost wish I believed in an afterlife, because surely if there’s such a thing as heaven, our pets will be there too.

I’m following the story of the vehicle carrier Felicity Ace, currently adrift and burning with 4,000 luxury and sports cars on board. Many of the cars on this ship are bespoke: ordered by wealthy customers who can afford to wait for them. It’s pleasant to imagine the rich assholes’ frustration; forced to twiddle their thumbs an additional six months to a year for replacement status symbols to be built and delivered.

It’s not just rich assholes who order cars from the factory, though. Regular assholes do too, sometimes. Donna and I did once. It was 1968 and we were anything but wealthy. We had our hearts set on a yellow Volkswagen convertible. It was to be our first new car. No dealer in the Sacramento area had one, so we put down a deposit and got on a list. It turned out there wasn’t a single yellow VW convertible anywhere in the USA. We wound up waiting six months for the car to be built in Germany, then shipped across the Atlantic, then trucked to the dealership near us. Luckily for us, our old car was drivable and we were able to wait. It was worth it. That yellow VW was the coolest car we ever owned.

I don’t know how often regular people order new cars, as opposed to picking them off dealership lots. It’s probably common with expensive cars like the Bentleys, Porsches, and Audis on that burning ship. I guess that’s how you buy a Tesla, since they don’t have dealerships; thousands of customers have put down deposits on new Ford F-150 Lightning EV pickup trucks, which is sort of the same thing.

So anyway, the ship is still adrift and burning in international waters off the Azores, abandoned by its crew (who are all safe). Should someone manage to board it and put out the fire, can they not claim salvage and take possession of any unburnt cars on board? That’s how salvage law works, right? Of course the upholstery will always smell of smoke, but maybe you could get a deal on one. Which reminds me, do teenaged boys still pass on the urban legend of the cheap Corvette? You know, the one with the Death Odor?

I shouldn’t give a shit about the things celebrities get up to, but I’m terribly disappointed with comedian Patton Oswalt for participating in online sports book advertisements on TV. Not many things are sins in my book, but gambling is one, and moreover one with a devastating effect on families. Shame on me for thinking Oswalt was one of the good guys.