Here’s a fun article sent by a friend who served with me at Soesterberg Air Base in the Netherlands. It brings back fond memories. 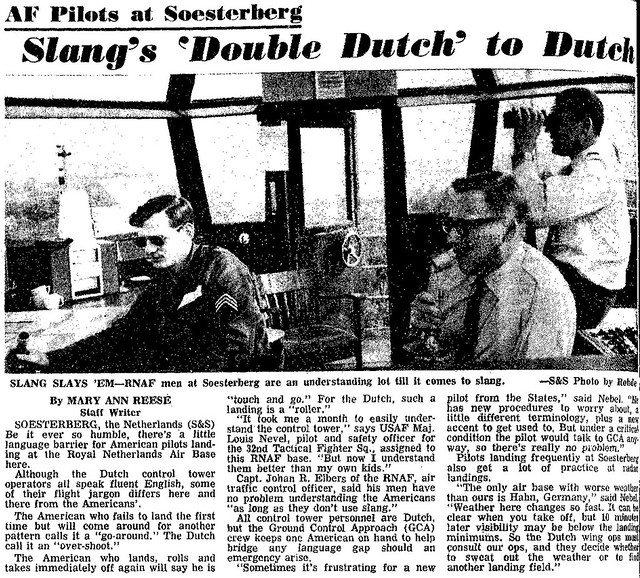 American aircrews who fly regularly in Europe are familiar with the aviation English spoken by air traffic controllers there. I wouldn’t say it’s slang, exactly … it’s a combination of British and naval terminology. They don’t say “active runway,” for example. It’s “the duty.” There was one slang term, though, that totally flummoxed me the first time I heard it: a strange word that sounded like “row-ghee.”

I quickly realized it was the Dutch (and sometimes German) version of “roge,” the shortened form of “roger,” as in “Roger, WILCO.” Except they gave it two syllables. What I never did figure out is whether they did it jokingly or if they actually thought it was supposed to be pronounced that way. I lean toward the former, because American fighter pilots, who in my day were always airborne over the Netherlands and Germany, said “roge” for “roger” all the time, and they knew very well how we pronounced it.

One other memory, brought out in the article’s final paragraph: how quickly new American fighter pilots at Soesterberg learned to land in near-zero visibility, not to mention how to fly to and from the working areas in solid cloud, glued to instruments the entire time — unless you were flying formation, in which case you were glued to lead’s wingtip, which was sometimes all you could see! 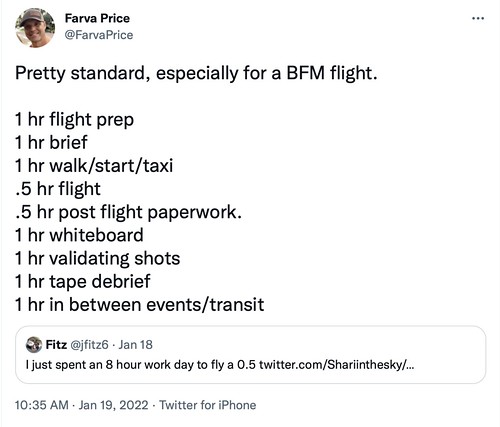 I’m guessing these are F-35 pilots. I hear that fighter is severely fuel-limited when it’s clean (no external tanks), so maybe half-hour flight times, especially for BFM (basic fighter maneuvers, aka dogfighting, with lots of afterburner use), are typical. But my experience in the F-15 Eagle was quite different, not just in terms of sortie length but all that other stuff too: briefings, paperwork, debriefing, etc.

Here’s what went into briefing, flying, and debriefing a typical peacetime training mission in the F-15 (which admittedly carries way more fuel than the F-35):

I’m not sure why the original poster breaks debriefing into three hour-long segments (one each for whiteboard, validating shots, and tape debrief). It’s all the same thing, done at the same time, and typically takes about an hour. And if you’re double-turning to a second sortie, you don’t have much time anyway. Still, though, fighter pilots routinely put in 12+ hour days.

After 45 years, F-15 “legacy” Eagles are leaving Europe, never to return. Legacy Eagles are, of course, the single-seat A and C models that were based at Bitburg and Spangdahlem in Germany, Soesterberg Air Base in the Netherlands, and RAF Lakenheath in the UK. Nine or ten C models are still flying at Lakenheath, but they’ll be withdrawn by the end of February, replaced by F-35s.

A squadron of Strike Eagles, two-seat F-15E models, will remain at Lakenheath. The Strike Eagle flies a primarily air-to-ground mission with a dedicated two-person crew, and is a different animal than the legacy Eagle, an air-to-air fighter flown by a single pilot.

One of the remaining legacy Eagles at Lakenheath has been painted with special tail markings:

My guess is the jets being withdrawn from Lakenheath will go to Air National Guard units in the States. Once Lakenheath is no longer in the Eagle business, there’ll be only one active duty USAF unit still flying legacy Eagles: the 18th Fighter Wing at Kadena Air Base in Japan.

Why am I following news about legacy Eagles in Europe? I’m a legacy myself. My first F-15 assignment was at Soesterberg, where I flew both the A and C model. Our simulator was located at Bitburg and some of our depot-level maintenance was done there, so we flew in and out of Bitburg all the time. I also flew into Spangdahlem and Lakenheath during my time at Soesterberg, but that was before either base had Eagles. I try to keep up with happenings at Kadena too, since I flew C models there.

Nothing wrong with being a legacy, so long as it’s a good legacy!

4 thoughts on “Air-Minded: Roger That!”