Another Year Shot To Hell 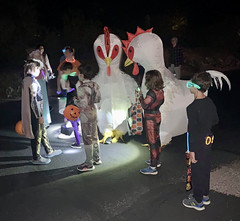 My personal calendar year begins on the first day of November and ends on October 31st. Show me a Halloween baby who doesn’t feel the same way and I’ll show you a soulless automaton programmed to go along with the crowd.

We got through Halloween without suffering any tricks. It probably helped that the treats we handed out were the real thing: full-sized Payday, Snickers, and Rice Crispies bars, Reese’s Peanut Butter Cups. None of that bite-size miniature nonsense.

Our neighborhood is small but we always get a few trick-or-treaters. Some of the costumes we saw last night were impressive: the chickens freaked our dogs out of their skins, and me as well. I think the girl in the gold and black jumpsuit was dressed as Amy Acker’s Illyria character from the last season of Angel, and I wondered how many of our neighbors got it. Too cool!

I turned 75 yesterday, which seems an important milestone even though I don’t feel appreciably older. The first order of business was unwrapping, adjusting, and donning my new wristwatch. Its design is close to that of my Vietnam War-era fighter pilot Seiko, purchased at the Vance AFB Base Exchange in 1974 and worn on nearly every sortie I flew during my USAF career. It’s water damaged now and, they say, unfixable, but with the new watch I feel like a Yankee air pirate again, a proper steely-eyed aerial assassin. Thank you, Japanese watchmakers, for helping me recapture those glory days. 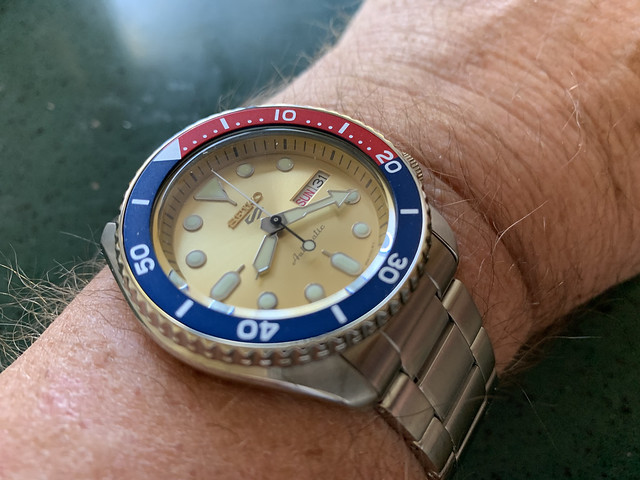 In addition to the watch, Donna gifted me new undershirts, badly needed, and a set of food storage bins with lids, the latter always being in short supply around here, ditto needed, ditto badly. Our son Gregory kicked in with an Amazon gift card, as did our friend and birthday dinner guest Mary Anne. I love Amazon gift cards, and you can never go wrong giving me one! Polly stole the show with a big coffee-table book about one of my favorite television series, Firefly, concealed inside a box she painted with images of Fritzi, Lulu, and Mister B.

As if it weren’t already a great birthday, there was a bike show down at the beer garden on the corner, so I fired up the Goldwing, rode down, and took a few photos.

Among the eye candy on display: a 1967 BSA Lightning, almost identical to the ’65 Beezer I rode in Oklahoma during pilot training; one of the new massively-jugged BMW R1800s, the first one I’ve seen in person; a nice stock Harley knucklehead; and a flathead chopper. I took a bunch of photos, and there’s a Flickr album you can view by clicking here. But I’ll post one more photo here. 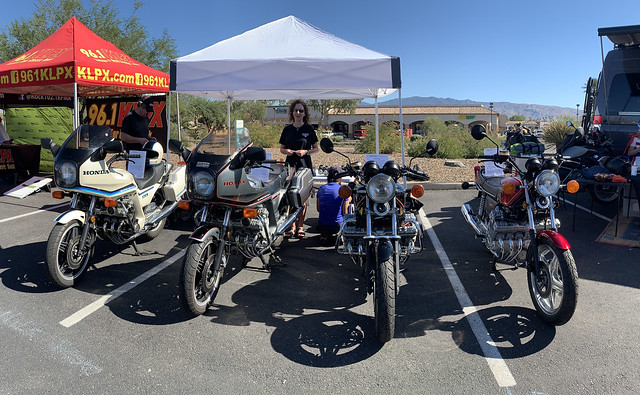 Four inline six-cylinder CBX Hondas — I could count those pipes all day! Speaking of counting, I lost track of birthday greetings on Facebook after the first fifty, but individually replied to every sender, and will check again this morning to make sure I didn’t miss anyone!

So I’ve been following the story of the Southwest pilot who got on the PA after landing from a Houston to Albuquerque flight last week and said “Let’s go, Brandon” to a captive audience of passengers, one of whom was an AP reporter who actually got out of her seat, pounded on the locked cockpit door to protest, and nearly got herself arrested. Good for her. More of us need to start fighting back against this rot. What might have happened if that pilot said it at the beginning of a flight, and there were a bunch of MAGA anti-maskers in the cabin? Something, and it wouldn’t have been good.

I’ve been hearing for a while that Southwest’s corporate culture is heavily Trumpist and Fox Nation. I hear the same about a lot of companies and businesses, too many to boycott without totally cutting ourselves off from the world, too many altogether. I may have been a leftist minority during my USAF service, but never had reason to think military or commercial flying had a political culture, far less a right-wing one. There must be other military and commercial pilots who are embarrassed by their Trumpite colleagues. It’s past time for us to step up and start doing something about it, and it wouldn’t hurt for the FAA to get involved.

This caught my eye, part of a statement by Southwest about the no-doubt half-hearted investigation they say they’re conducting into the “Let’s go, Brandon” incident:

Southwest does not condone Employees sharing their personal political opinions while on the job serving our Customers, and one Employee’s individual perspective should not be interpreted as the viewpoint of Southwest and its collective 54,000 Employees.

Since when do Americans capitalize “employees” and “customers”? Germans might do so, but we speak English, and those aren’t proper nouns. Stupid people think it’s respectful somehow, but what it really is is authoritarian sucking up, and it’s un-American to its core … we do not kowtow to others. We are all equal. Stop it. Stop it now.